A Jewel and Other Texts 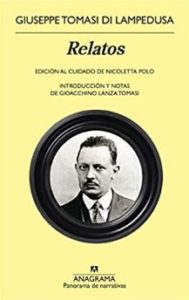 Someone like me, who can become very heavy about what he enjoys, has been banging on for a few years about the desirability of rescuing Giuseppe Tomasi di Lampedusa’s stories. The last edition of this volume in Spanish, published by Edhasa, dates from 1990 and, although 30 years are nothing, in the increasingly fleeting market of editorial novelties it is tantamount to vanishing. Welcome, then, to Anagram’s rescue, and congratulations in advance to the readers, because it has to be said this book contains one of the most beautiful texts in the world. (Translator’s note: in the English-speaking world, Alma Classics re-released I racconti in 2013 as Childhood Memories and Other Stories with a new translation. They are also available in a 1997 Harvill Edition entitled The Siren and Selected Writings, referred to here.) 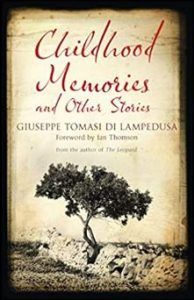 I should begin, however, by noting that Lampedusa’s Stories are not all stories as such. Not all of them. Specifically, only two of the four listed in the contents. We’ll find out what the others are in due course. After the scholarly foreword by Gioacchino Lanza di Tomasi, adopted son, heir to Lampedusa, and perhaps the one who knows most about his life and work, come the ‘Childhood Memories’, a first draft of what might have been the germ of a longer autobiographical text. It was Lampedusa, himself, who patented the idea that the State, any state, ought to impose on its subjects the obligation to keep diaries or write memoirs. “There is no memoir, however insignificant its author may have been, that doesn’t encapsulate expressive and social values of the first order.” His would be no exception.

This brief memoir could also be read as a collection of thoughts and ideas which would then crystallize in the Sicilian’s great work, Il Gattopardo (The Leopard), the very same book so crushingly remembered by the famous phrase where everything must change so that nothing changes; well yes, but it is also one of the most beautiful exponents of a genre, the historical novel, which is not exactly overflowing with masterpieces.

Gioacchino Lanza has pointed out that the ‘Memories’ reveal “the meaning of the game, of a dream fantasy accompanying the emergence of late creativity”. Indeed, one can glimpse in these pages the writer who has been preparing his whole life to be just that, and who in the last years of his life – he will die when only 60 – will compose that fabulous paean to an era and a lineage on the verge of decline. We will never know what these childhood memories would have looked like on completion; perhaps their destiny was to remain as a warm-up exercise before undertaking the feat of writing The Leopard. In any case, they belong to a tradition of the island’s aristocracy which runs from the estimable Happy Summer Days, a book by Lampedusa’s cousin, Fulco di Verdura, who ended up designing jewelry for Coco Chanel, to Via XX Settembre, by Simonetta Agnello Hornby (her Palermo memoir).

The second piece in the volume, ‘Joy and the Law’, is a Christmas tale with key Neorealist elements.  The protagonist is a grey accountant who trudges the bombed streets on his way back home — a home full of brats — with a chunky panettone he has won in the office raffle. Perhaps he can be accused of displaying certain stereotypical padding, but he possesses the undoubted value of being Lampedusa’s first and only known attempt at reflecting a world outside of his own; an attempt made with literary ambition, beyond the modest end result.

The last piece in the volume, ‘The Blind Kittens’, is actually the truncated beginning of a novel that might have been some kind of a continuation of The Leopard. The autobiographical and the historical merge once again into an eventful ride whose title already implies the fate of its characters, those blind kittens who can’t even manage to see the light. If I’m not mistaken, within the text there also looms, for the first time in Lampedusa, an observation on the vernacular violence of the Mediterranean’s largest island, in which “deeds of violence when unpunished were in that time a motive for esteem, the halo of Sicilian saints being blood-red”.

The house of Salina, the emblematic protagonist of The Leopard, is still present in this new installment, as it also is in the jewel of the volume, which I have purposely left until the end. ‘The Siren’, originally titled ‘Lighea’, is told precisely by a Salina who finds himself in rather reduced circumstances, “the only surviving specimen of that family”, a legatee of “all the Leopard’s ways”, writes Lampedusa humorously. I won’t tell you much more about the story, I trust you will read it and judge it for yourself.  It’s the love story of a man and a mermaid. There are only a handful of pages, but from the very first to the last they are accompanied by grace, inspiration, culture and beauty. Let me just say that the first time I read it, I wanted the book to float in the air so I could applaud every few minutes.

In short, the ‘Childhood Memories’ are a warm-up for The Leopard; ‘The Blind Kittens’, a stretching exercise. What about ‘The Siren’? The siren is a song, but not that of the fabulous sea creature, but of the swan. Some wagging tongues, which abound in Sicily, have even tried to insinuate that this story, so much better than the others, was not the work of Lampedusa, but of his disciple Francesco Orlando.

I mention this piece of malice simply for notary purposes, without giving it any credence. I am convinced that Lighea belongs to the author of The Leopard; that nobleman whose original manuscript had been rejected by the great publishers of the time, but due to which there was already no going back, as he had discovered the pleasure of writing. Lighea is the work of a man who enjoys each paragraph, each line, regardless of its destiny. Someone who has been diagnosed with a fatal cancer, who counts his life expectancy in a few months, and is willing to invest them in what the maestros taught him: to leave a little beauty in this world.

This article first appeared in M’Sur – see here for the original.

Alejandro is the author of Borges in Sicily, a travelogue in search of the photographic locations used by Ferdinando Scianna when he took images of the Argentinean writer, Jorge Luis Borges, during his island tour.