I’ll be honest and admit that I can’t think what to write about today but it occurs to me that you might like to know how my relationship with Sicily, and Modica in particular, began. I wrote the following in 2002 when I was trying to get the diaries of my Sicilian trips in order:

It is almost exactly ten years since my first visit to Sicily, and the last thing I expected to do there was to fall in love. But fall in love I did, with the island, its cuisine and, of course, its people.
As I sit here writing this with “Irma’s special pen” [a gift from her at Christmas 1995] I recall how it all began, in the unlikely surroundings of an inner-city comprehensive school in Cardiff. We were planning an Italian course as part of a year 12 [sixth form] business project and a list of Italian schools looking for British exchange partners had just come in. I had scanned the list and I still do not know what made me decide to make a tentative call to a school in the Ragusa province of Sicily.
“Le passo la professoressa Churchill“. [It is common in Italian to address professional people by their job title.] And on came this singing, lilting voice! Prof.ssa Churchill turned out to be  an Englishwoman who had married a Sicilian and been settled on the island for many years. I can hear her now: “Oh, it’s lovely here. Don’t believe all the bad things you’ve read about Sicily. We’re just a couple of hours from Syracuse.” Syracuse – a romantic-sounding name recalled vaguely from long-ago history lessons, conjuring up visions of the Greeks and countless invaders. I had no idea, then, that la prof.ssa Churchill would become one of my closest friends or that I would bid a figurative farewell to my mother in the magical harbour of Syracuse. 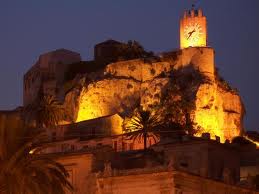 For with that first phone call I had begun to forge so many links: with the Istituto which would, indeed, participate in two exchanges with Cardiff; with Modica, the little town which seems, at first glance, to have been almost accidentally carved out of the rocks and which I hope will one day become my home; and with the colleagues who became friends, sharing with me their homes and their recipes during fourteen visits to date and nursing me through the aftermath of my mother’s death.
I think of them now as I open a kitchen cupboard to reveal the jar of olives I have marinated alla Concetta, or as I pass a finger over the glaze of the cotagnata [quince paste] mould on the dresser. I remember where and when I obtained and watched the preparation of each recipe as I browse through my notebooks, coming across “Linda Churchill’s Parmigiana“, “Gina’s Modican Pizza” or “Irma’s Aubergine Starter”. Here is the olive recipe:

Put the olives in a bowl and add the orange peel, cut into fine strips with a zester. Add the grated lemon rind, the garlic and fennel seeds. Pour over olive oil to cover the mixture well, add the lemon juice, mix and let marinate for an hour before serving. [I add a few crystals of seasalt.] This keeps well in a jar, provided you remember to top up the oil every time you take some olives out.