A Palace in Palermo for Dreamers 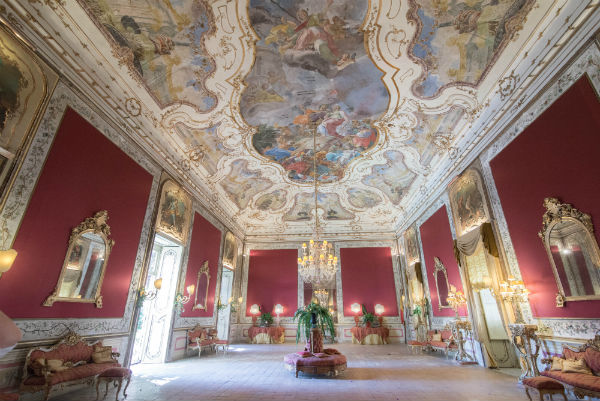 To spend a night or two sleeping under the roof of a late 15th century Catalan Gothic palace in the Palermitan street where Giuseppe Garibaldi and his Red Shirts marched down triumphantly in May 1860, is for dreamers and ‘Sicilian palace architecture’ enthusiasts.

The splendid palaces, which line both sides of Via G. Garibaldi, are decked with balconies and worn sets of huge double entry doors and some are topped with the coats of arms of once powerful Sicilian ‘Leopard Princes’. (There is in fact street upon street in Palermo filled with noble old palazzi). 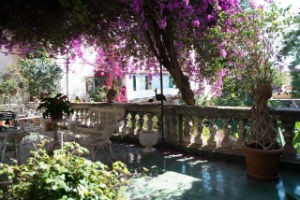 And, it is ‘the faded Sicilian nobility’- says American novelist Francine Prose, in her book, Sicilian Odyssey – which ‘inspires romantic fantasies’ and, I have long wanted to stay a night or two in one of these Palermitan palaces.

The one which has lured me often has been Palazzo Ajutamicristo.

A few summers ago, when Ajutamicristo’s main entry doors were open, I ducked into the quiet, internal courtyards and saw the splendid colonnade with a double arcade. The loggia on the first floor: arched, balanced and classic was captivating. It was full of charming fadedness and elegance.

Set in the heart of Palermo’s La Kalsa quarter, just down from the famed Piazza Rivoluzione, and the Gallery of Modern Art (GAM) and around the corner from the Arab Norman jewel, La Magione, Palazzo Ajutamicristo also sits in Palermo’s street of hat sellers. 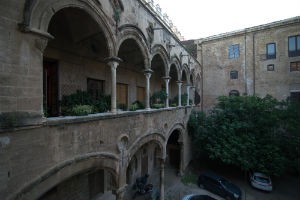 And, when in the late spring of 2014 I read that Palazzo Ajutamicristo had three rooms for paying guests I booked for two nights.

Designed in the late 1400s for the newly arrived Pisan merchant, Guglielmo Ajutamicristo by one of the most sought after Sicilian architects of the day, Noto born Matteo Carnilivari, Palazzo Ajutamicristo has been the host of many great guests including Muleassen, king of Tunisia in 1544 and the Neopolitan Queen, Giovanna.

However, ‘the most important guest who came to stay was,’ revealed the owners, the Calefati family, ‘the Emperor Charles V of Spain, who probably didn’t trust the personnel and the notables at the royal palace, where you would expect him to stay, but relied on the local aristocracy and its attitude for stability, which however, declined into immobility.’

Before the serious demise of the Sicilian aristocracy there were some flamboyant additions to Palazzo Ajutamicristo. Renaissance and Neoclassic do feature, yet, the noble Catalan feel of Carnilivari’s palace is sensed the minute you walk through the 15th century entry doors. And Palazzo Ajutamicristo, in the words of historian Angheli Zalapi, is still regarded as, ‘one of the most prestigious examples of late 15th century Sicilian architecture’.

It has been the home of the Calefati di Canalotti family since the 1800s and part of the palace is now owned by the Sicilian government.

That day in 2014 my husband and I drove in through the 15th century portal from Via Garibaldi and left the car in the second earthen courtyard, beneath the first floor loggia. We made our way past the holy shrine devoted to the Madonna, up the gentle climb of the worn, stone stairs, the hand rail strung with red cord, to the high wooden doors on the first floor.

The welcome from La Signora was warm and the soaring entry; wonderful. She showed us to our room through a small library filled with books, framed documents and family photos. 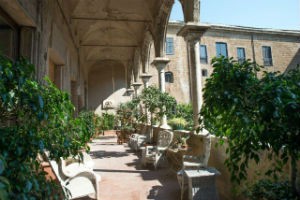 Sleep came easily in a bedroom, cloistered at the back of the palazzo, which was once part of the splendid, enormous dining room. Papered in a wide pink stripe our room opened to the sunlit loggia, filled with plants and furnished with well used rattan chairs. It was a spot to read and to listen to the distant sounds of church bells and incoming ships.

It was secluded and, we turned our backs on the wonderful chaos of Palermo.

On the first morning, breakfast was served in the entry room at a small table set with coloured glasses and draped with a cloth. It was simple: fresh fruit, croissants, cake, homemade jams, juice and coffee. 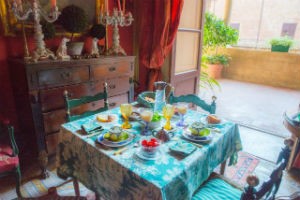 And, the second morning, we ate at a wrought iron table on the enchanting secret terrace off the ballroom, the Cortile Del Petrosino.

The terrace was large, open to the sky and tiled in green ceramics scattered with pink bougainvillea flowers.

The ballroom, part of the palazzo built by Andrea Gigante around 1760, was glorious. And the vibrant blues, reds and golds of Giuseppe Crestadoro’s fresco ceiling, the Gloria del Principe Virtuoso, were illuminated. It was a room fit for the once flamboyant Sicilian nobility like Giuseppe Tomasi di Lampedusa’s tired ‘Leopard Prince’, the Prince of Salina.

The classic worn majolica floor tiles were a reminder of guests who once danced at Ajutamicristo’s balls. 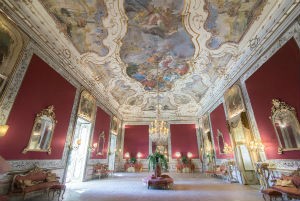 Most of the rooms are private though and guests cannot wander. However, if you have romantic notions, want to appreciate a wonderful building and stay a night or two in a palazzo which belongs to what Angheli Zalapi, in her book, Palazzi of Sicily calls, ‘the Sicilian tradition of palace architecture’, you will be transported into another world.

It is an unforgettable way to step inside private Palermo as you explore Sicily’s enticing capital.