A Potter From The Madonie 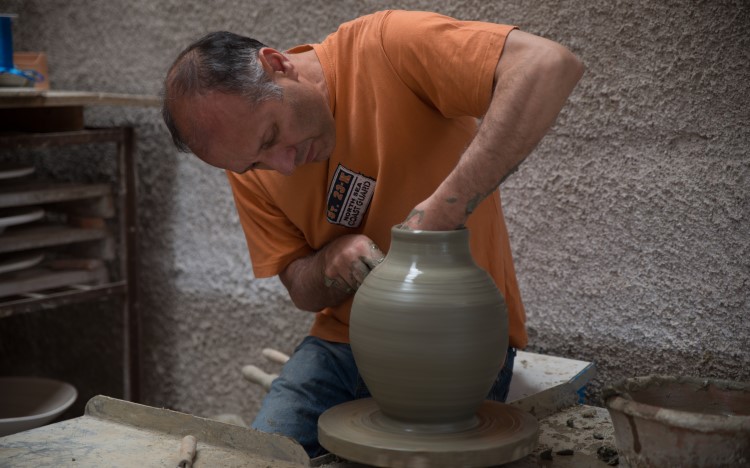 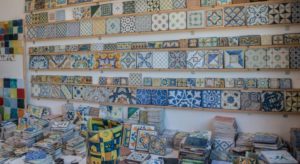 There is a sense of monastic silence as Sicilian potter Giovanni D’Angelo leans into his throwing wheel, working it with his right foot as his hands guide the wet clay.

It is an early summer’s day in the Madonie Mountains and Giovanni is throwing a pot in his studio, Ceramiche Artistiche D’Angelo, about 10 minutes outside the village of Polizzi Generosa.

Polizzi Generosa, on the northern edge of the Madonie National Park, an hour or so from the capital Palermo, has been a centre of pottery making for over 2,500 years, since the time of ancient Greek rule in Sicily.

My husband and I meet Giovanni at his studio to talk about his work and to see the old brick furnaces used by a long line of D’Angelo potters up until the late 1980s. Giovanni now fires in a large modern Italian kiln. Stepping out of the car, the cool mountain air defies the beginning of summer and Giovanni quietly welcomes us.

I enjoy the forms: baroque floral curves of the acanthus plant, modern geometric shapes echoing Arabic design, citrus fruits like those that filled Palermo’s once celebrated Conco d’Oro, ruby wine coloured pomegranates and the creamy depths of magnolias. All of these are made by Giovanni’s hand and the slight imperfections are glorious.

Beneath these shelves is a collection of what Giovanni calls ‘usable artwork’. Modern stools with an informal curve that makes you want to pull one up, to sit and chat, tall umbrella stands patterned with a melange of local landscape images from his ‘landscape’ period and detailed pots some lidded, plates and cups, candle holders, decorative wall plaques and bowls of deep green. 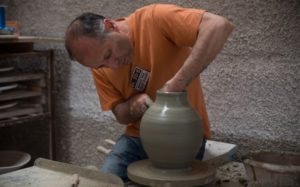 Looking at all of these, I understand why Giovanni’s glazed pottery is sought after by both collectors and holidaymakers. It is unique, a modern interpretation of Sicily’s ancient ceramics tradition created by an artisan.

“It is my interpretation of the local landscape, I used the deep autumnal colours of red, yellow and green to capture it,” and he continues, “here is reference to its change– the houses here,” he says, pointing to the plaque, “represents the evolution of the landscape”.

Giovanni learnt the art of pottery making from his father, Vincenzo, who in turn learnt it from his father Giovanni. Giovanni comes from a family of potters – the D’Angelos have been firing a kiln outside Polizzi since the mid- 18th century. Initially they were the makers of unglazed terracotta household containers for olives, olive oil, spring water and wine as well as building materials: floor and roofing tiles.

An historian and lover of ceramics, Tommaso Gambaro from Collesano, another centre of ceramics in the Madonie, has said that a potter named D’Angelo had contracts with a local monastery in 1748. The mid-18th century was a period of great monastic communities, in particular the Jesuits. They owned and worked the water powered flour mills in the verdant valleys of the Madonie outside of Polizzi Generosa. It is suggested that this 1748 D’Angelo was one of Giovanni’s long line.

Giovanni did however manage to get some of the ‘fat’ clay and uses it for singular artistic projects.

His eagerness to talk about what ‘pushed’ him fully into his handmade pieces is palpable, ‘it was the early 1980s,’ Giovanni says and, “I knew that I could not compete with the industrialised production of building products, floor tiles and ceramics which was sweeping Italy”.

It was from this point that he began faithfully, creating by hand,the traditional colourful glazed Sicilian floor tiles for restoration work in the villages of the Madonie – Gangi, Isnello, Petralia Sottana and Geraci.

He studied local examples of tiles in the palaces of Polizzi Generosa. In Palazzo Carpinello, where the floors were covered with baroque swirls and festoons of colour: blues, yellows and greens painted on ‘the milky depths of the tiles’ he spent hours and hours.

Some of Giovanni’s best restoration work was at La Zisa, the 12th century Arab inspired summer palace of the Norman kings of Palermo. He faithfully recreated beautiful, thick rectangular brick tiles to compliment La Zisa’s Moorish form built by Arab craftsmen when Sicily was under Norman rule, yet infused with exotic Arab culture.

It was the conquering Arabs, when they ventured across the Mediterranean from the north of the African continent to the shores of Sicily in the early ninth century, who brought with them the glorious art of glazed pottery. Since Arab times Sicilian ceramics have been known for their splendid glazed colours and flamboyant decoration. 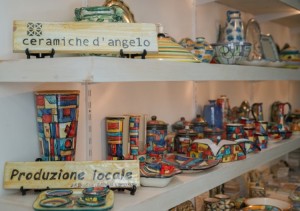 After walking the long length of the old vaulted brick furnaces where thousands upon thousands of brick terracotta tiles have been fired since the mid- 18th century we return to Polizzi Generosa.

At a later date we go to Giovanni’s shop, on the main street opposite the village’s city hall.

In the basement of the city hall, a striking 17th century building, once a Jesuit monastery, there is a small archaeological museum which houses a display of Greek household pottery items, more than 2500 years old. Everyday objects, all unearthed outside of Polizzi, all made using Polizzi’s “fat” clay, fill the cabinets.

Giovanni’s wife, Silvanna, greets us and as we enter I notice that the floor is patterned in glorious yellow and blue glazed tiles. She mentions that these are a faithful reproduction of the tiles of Palazzo Carpinello.

The shelves of Giovanni’s shop glow with his handmade glazed pieces. Silvanna takes, from the middle shelf, a small tile, traditional in design yet beautifully coloured in what she calls ‘cool modern colours’. There are soft browns and muted yellows and the contemporary style of this new range echoes Giovanni’s creative spirit.

After a while she holds some splendid decorative orbs: Christmas ornaments done in the landscape series. She also picks up a lidded pot: glazed in red, shaped like a cherry and topped with a long stalk like iron handle. It was made for a Christmas gone. Silvanna talks passionately of the first year Giovanni created coloured ceramic Christmas baubles to hang on the fir tree near the shop’s front door. He now makes these every Christmas. 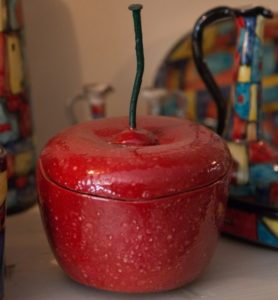 As we leave and close the door behind us I recall the day in September 2011 when three wooden boxes of 10 x 10 centimetre glazed ceramic tiles arrived in Australia from Polizzi Generosa, Sicily. They were all handmade and painted by Giovanni and scripted with the names of 180 guests for the early spring wedding of my eldest daughter in the Australian bush.
[geo_mashup_map]