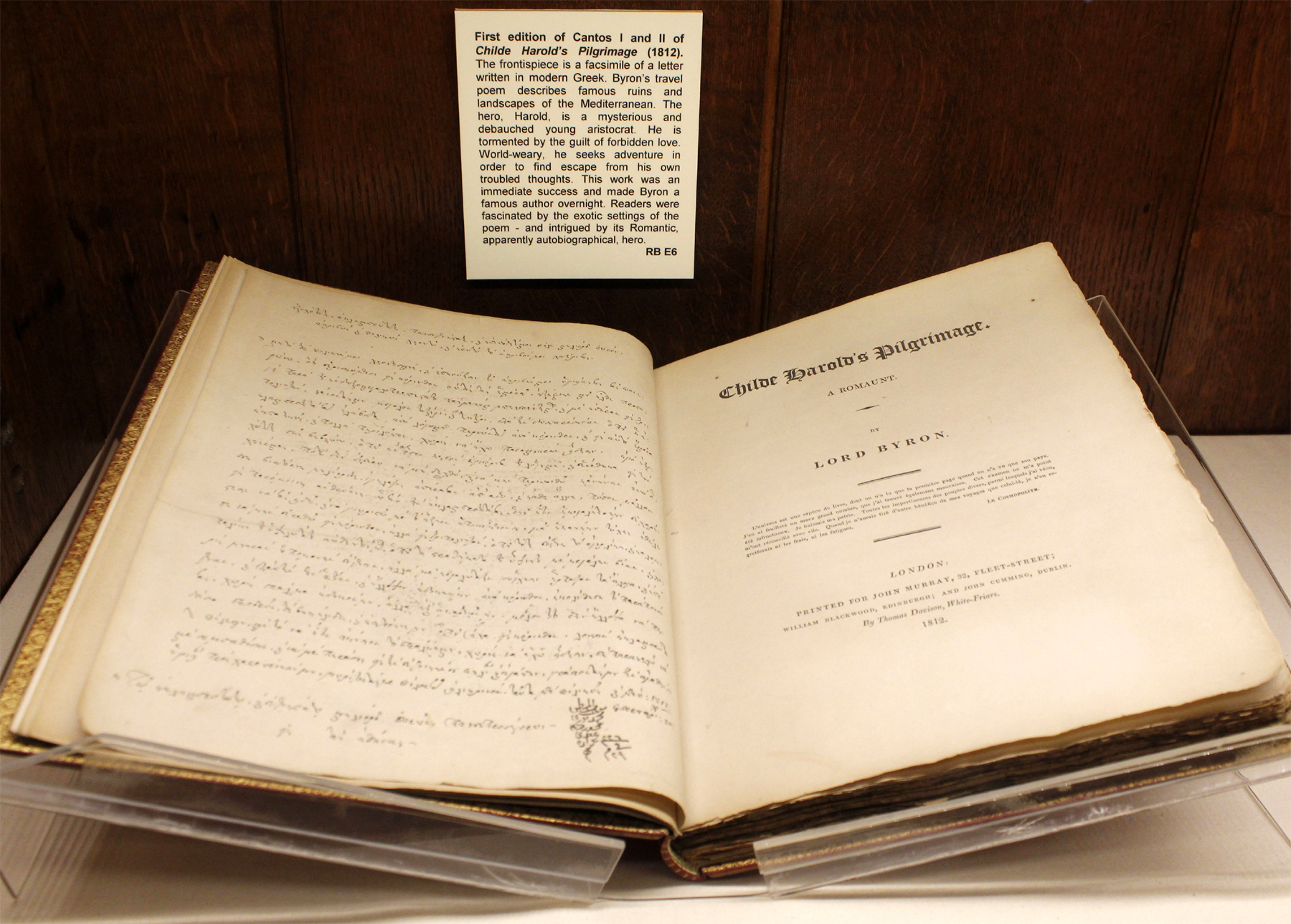 A few weeks ago, we finally made a trip to Newstead Abbey, the gothic manor near Nottingham that used to belong to Lord Byron. More than just a museum set in aspic, the building exudes certain aspects of Byron’s peculiar charm. It seems to be a summation of his contradictory character, a bricks and mortar representation of his complicated life. By way of comparison, the visit led us to ruminate on the writers’ abodes we have previously visited, including the ones we have seen in Sicily; an island more than fulsomely endowed with its fair share of excellent authors. What does Lampedusa’s palace in Santa Magherita di Belice tell us about the man behind The Leopard? How did Caos, that aptly named suburb of Agrigento, influence Luigi Pirandello? What is left of Salvatore Quasimodo’s presence at his former house in Modica? Can we see Lucio Piccolo’s poetry reflected in his former villa behind Capo d’Orlando? Are their personalities still manifest like Byron’s seemed to be at Newstead or is this just a mere visitor’s wish fulfilment?

It is safe to say that the more colourful the character of the individual, the more of an imprint is made on the surroundings. In an interview we conducted with the writer and journalist, Gaia Servadio, she recalled a visit to the Villa Piccolo which left her with the affectionate impression that the incumbents were ‘cuckoo’. Our own visit resulted in an appreciation of the charmingly eccentric life led by the former owners. The living room is divided into two halves – there is no actual physical barrier but the psychological space on either side belongs to two different minds. Lucio’s brother, Casimiro, occupied the left-hand side of the central salon. The fastidiously ordered neatness is due to the elder Piccolo brother’s obsessive compulsive disorder, hence the seemingly neurotic placing of furniture and décor. Lucio’s half is far more lived-in with magazines abandoned on side tables as if the distracted poet’s attention had suddenly been drawn elsewhere.

The library, unlike Newstead Abbey, is still stocked with the books once keenly thumbed by Lucio and his cousin, Giuseppe Tomasi di Lampedusa, including copies of Byron’s poetry. Much of the same space in Newstead is taken up with Byronalia ranging from his silver toothpick, boxing gloves, and fencing mask to his unused Greek battle helmet. Whilst these fetishistic artefacts bring the man closer to our reality, the unchanged air of the Villa Piccolo library places a sensitive visitor at the very moment where Lucio reaches for a volume, opens the page to a marked passage and turns to confront Lampedusa in lively debate.

The Piccolo family’s more esoteric pursuits are evidenced by Lucio’s correspondence with that champion of Irish folklore, W B Yeats. The ‘little people’ are much in evidence throughout the villa in Casimiro’s paintings of sprites and pixies; he liked nothing more than to populate the garden with such imaginings during his night-time wanderings under a sultry full moon. A visitor to the garden is more likely to be struck by the dog graveyard which bears testimony to the unconventional manner in which the family esteemed their beloved pets. Row upon row of neatly arranged identical headstones, differentiated only by the animal’s name, are outlined by bricks and adorned with vases occasionally holding fresh, brightly-coloured flowers. Byron would have identified with this reverence for man’s best friend. The poet buried his favourite canine, Boatswain, in the abbey’s grounds, erecting a monument inscribed with the immortal ‘Epitaph to a Dog’ that starts: ‘Near this Spot / are deposited the Remains of one / who possessed Beauty without Vanity, / Strength without Insolence, / Courage without Ferocity, / and all the virtues of Man without his Vices.’

Turning to matters feline, the Leopard is harder to track down in Santa Margherita di Belice, and almost entirely missing from the redeveloped Palazzo Lampedusa in Palermo. Santa Margherita was decimated by an earthquake that shook its foundations in 1968. Much like a stage set, Lampedusa’s old summer residence, the Palazzo Filangeri di Cutò, is a simulacrum of the original. On face value, the palace, built by the Spanish Corbera family in the seventeenth century, looks every inch the aristocratic habitat of Lampedusa and his ancestors, but pass through the central arched door and the weathered plaster of the façade turns to immaculately pointed brickwork and smartly painted cement. The only sign of Giuseppe Tomasi’s presence is the wrought-iron heraldry to one side of the doorway. Undoubtedly, the archives belie the reconstruction but the building, itself, is a mere mask. The one place to truly inhabit the leopard’s skin is at the Palazzo Lanza Tomasi in Palermo where Lampedusa spent his days reading and passing on his immense literary knowledge to a small coterie of acolytes. Sadly, we have only gazed longingly at the building from the Foro Italico and via Butera.

Not all writers’ houses in Sicily have such an aristocratic heritage. The Nobel Laureate, Salvatore Quasimodo’s birth place in Modica is an unprepossessing two-storey dwelling with a rustic stone-supported balcony, typical of the region. A plaque celebrates his international acclaim and quotes from ‘Ed è subito sera’. Rather than reflecting the man himself, the property captures his origins and his family’s hardworking credentials. Quasimodo was soon to move from Modica as his father was a railway worker and re-postings were common. The casa natale reflects a society’s need to capture a famous son and claim him with pride irrespective of the diktats of time that mitigate against any lasting imprint.

Luigi Pirandello’s house is somewhat different as it emits some of the man’s lonely struggle. The dwelling is set apart from its neighbours with a view towards the author’s ‘African sea’. Famously, Pirandello, the man who wrote of the masks we wear, once said of his birthplace that ‘I am a child of Chaos and not only allegorically but in reality because I was born in a countryside, located nearby entangled woods, named, in Sicilian dialect, Cavusu by the inhabitants of Girgenti.’ Although he died in Rome, he requested that his ashes be interred at his family home in the surrounding countryside. The writer used to walk to a clearing with a solitary pine, under which, in accordance with his wishes, Luigi’s ashes were buried. The tree has since toppled, but the trunk remains in situ, a poignant reminder of the tranquillity Pirandello found in a spot others may find somewhat desolate and bereft. It is the most evocative part of a visit to Caos, as the museum aspect of the house, although interesting, with its reviews, first editions and theatre posters, is too staged to bring the man to the fore.

The busts of Pirandello on display speak of his character in a way that Lord Byron’s never could. There is more than one representation of the poet at Newstead, but he was a notorious poseur when it came to his physical representations. The Danish sculptor, Bertel Thorvaldsen, found him a difficult sitter who was too concerned with projecting an image rather than allowing a likeness. Pirandello is shown with his characteristic bow tie and magician-like facial hair, his chin tailing to a lugubrious point. There is a tightness and tension to all his statues that is commensurate with the nature of his writings. The brows are arched and the lines above his nose are etched in deep furrows.

There exists a book by the fine English writer, Charles Nicholl, called Traces Remain. In a series of essays, he plays the literary detective, conjuring everything from the trail of a lost Shakespeare play to the boyhood of Christopher Marlowe. Any visitor to a writer’s former residence is casting him or herself in a similar role in an attempt to uncover those traces, those footprints that haven’t been erased by the passage of time.

They are also authors of His Master’s Reflection, a travel biography in the footsteps of Lord Byron’s doctor and Andalucia: A Literary Guide for Travellers, which was also reviewed by the Times Literary Supplement: ‘a thoughtful, thoroughly researched and remarkably well-balanced scholarly guide to the literary history of one of Spain’s most eulogized regions.’ Andrew is the translator of Borges in Sicily by Alejandro Luque, a travelogue in search of the photographic locations used by Ferdinando Scianna when he took images of the Argentinean writer, Jorge Luis Borges, during his island tour.