All Roads for Driving Shoes Lead to … Sicily? 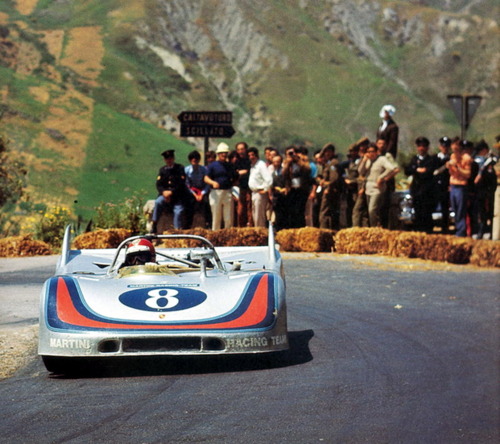 What do Vic Elford, Michael Keyser, Marco and Mario Andretti, Niki Lauda, Jackie Ickx and Mia Walsh have in common?   It turns out that a charming shoemaker from Cefalù, Sicily has won the hearts of each of these people.

Known as “il maestro” (the master), Francesco “Ciccio” Liberto has been making race shoes for famous drivers for over 50 years.   His customers, most notably drivers from the Targa Florio race which started running in the Madonie Mountains in Sicily in 1906, are as legendary as they come.

Hollywood has recognized his craft, his passion and his talent as well. Recently commissioned to make the shoes for Ron Howard’s movie, Rush, Ciccio’s shoes will take pole position on the big screen in this authentic F1 race movie due out in 2014.  Ciccio made shoes for the “real” Niki Lauda and was thrilled to be a part of the Hollywood reenactment of the rivalry between Niki and James Hunt.

This summer, while relaxing in the town of my great-grandparents, I decided to pay this myth, this legend, a visit.

Ciccio, a fun-loving Sicilian craftsmen, owns a simple shoe store; a sea-front shop on Lungomare in Cefalù with views of the Tyrrhenian Sea from all directions. Upon entering, you can see that simple shoes are not his passion.   Every wall and every inch of floor space are splattered with photographs and autographs of Ciccio, his shoes and the famous-famous legends of Porsche drivers and others who have been fortunate enough to have this “calzolaio dei piloti” furnish shoes to them.  This summer, I became one of his lucky clients!

Fluent in Italian, I told Ciccio that I was a “pilotessa” – for a hobby – and drove a Porsche on track. A typical Italian man, the idea of a woman who loved cars and drove on circuits was very enticing to him.  We spent a few hours that first day viewing the hand-drawn outlines of the feet of legends for whom he has crafted shoes.   His passion was obvious and his mastery was evident.  I left with the idea that I needed to have this legend make a pair of shoes for my husband.  After a brief conversation, my husband, Brian, suggested that since I was there in person and he was 4,000 miles away, I should have shoes fit for me instead.   Hey, I’m a girl – I can’t say no to another pair of shoes!!!

Ciccio invited me to his workshop on a cobblestone side street in the historic center of Cefalù to watch the master craft my shoes.   We selected the white and black leather (to match my car), which he cut by hand using my foot trace and one of the perfectly sized metal templates hanging on his wall.  The red silk lining was traced and cut as well.   Step by step, he walked me through the pain-staking process of glueing the pieces together, folding the seams and making the separate pieces appear whole.  When the glue set, I returned the next day to watch the knowledgable hands of this craftsman sew the double-stitching along the supple leather in perfect harmony with the lining.  The leather sole was crimped using a loud machine that served only that one purpose.

Joining me that day was the famous Sicilian filmmaker, Franco Turdo, who has produced a documentary on the life of Ciccio and his work and has covered Sicilian races for 20 years.   Franco has also achieved international fame recently for his new film, Maricchia, released in 2012.  Since I was a friend of Ciccio, Franco eagerly took a USB drive of my in-car camera video of laps from Watkins Glen in May and made a lovely montage for me.  “A friend of Ciccio’s is a friend of mine.”

After enjoying watching the master, Ciccio, work day after day, the final product would have to come later –  as it was time for me to leave bella Sicilia and still more work to be done on the shoes.

It’s not enough for Ciccio to take pride in his craft.  His passion for loving people makes him a match-maker – client to client, friend to friend.   I left Cefalù with a gift for Michael Keyser, a Porsche enthusiast, photographer, filmmaker, driver and publisher.   Michael’s books and movies, like The Speed Merchants (1973) and Behind “Le Mans”, are famous amongst the race-crowd.  His books contain award-winning pictures and text of the things we are passionate about – cars, racing and the legendary drivers behind the wheels.  In 1972, he filmed movies from a camera in his Porsche, which he drove in Sebring, the Targa Florio and the Nurburgring, just to name a few.  His company, Autosports Marketing, sells classic race memorabilia as well.

A brief phone call to Michael, who lives 15 minutes from my home, started with me saying, “I have a gift for you from Ciccio from Cefalù.”.   It was as if the President of the USA called Michael himself, who was overjoyed to hear from his dear friend through me.  Michael made an appointment for me to visit the following day.

Michael’s home is like a museum.   Actually, his third floor is a museum.  Hundreds of model cars line his walls, each one hand-crafted and modeled after the cars of legends.   His own car, a spritely yellow #23, has been miniaturized and lovingly boxed as well.  I can only say that I left Michael’s house like I was just a contestant on The Price is Right.   I had parting gifts of cars, books, DVD’s and posters – which I eagerly showed to my family and friends upon my return.   Generosity begets generosity.   Friends of Ciccio’s are friends of mine.

Next on the connection list was Vic Elford. I asked Ciccio if he could share with me a picture of one of the pairs of shoes he made for Vic which I had seen during my Sicilian visit.   Within a day, I had emails from Vic and his wife, Anita, with some wonderful pictures of Vic and Ciccio together, hand painted race shoes of Vic from an artist Ciccio uses in northern Italy and several photographs from the three Targa Florio museums in Sicily.

Last summer, I had visited two of the Targa Florio museums in Sicily during a road-trip on my cousin, Ottavio Brocato’s, Vespa LX50, on the original streets of the main 70 kilometer Targa course.   The towns through which the course passed were charming, mountain villages and proud of their Targa Florio heritage.   When I told Vic that I was only aware of TWO Targa museums, he responded: “There are THREE Targa Florio museums; Cerda, Collesano and Campofelice. The last one is privately owned and run by my friend Antonio Venturella. I literally gave him the Tee shirt off my back to add to his collection.”   And indeed he did, as Vic forwarded me a photo of himself, shirtless, embracing his dear shoemaker friend, Ciccio.  Vic, meanwhile, is an idol in Cefalù and visits the town regularly with welcomed receptions with the mayors of Cefalù and the surrounding villages.

My final Ciccio connection came just as Baltimore was preparing for its 2nd annual Baltimore Grand Prix, held August 31st – September 2nd, 2012. Though I was driving at Virginia International Raceway that weekend, I enjoyed the pre-event festivities along with another customer of Ciccio’s, Marco Andretti.   Marco had several public relations stops since Andretti Sports Marketing was a sponsor for the event.   I met Marco at the Giant supermarket near my house, per Ciccio’s request, to pass along his greetings and well wishes.   In January, 2011, Ciccio made a pair of shoes for Marco and they, like all of Ciccio’s clients, became friends.   Marco was enthused to hear greetings through me and spoke of his grandfather, Mario, who was also a client of Ciccio’s, as well as the “special shelf” where his Ciccio’s shoes are displayed in his house.     Marco gave me a note to pass along to Ciccio. Then, in turn, Ciccio sent me a picture of Marco with his shoes and a “simpactico” letter from Marco.   Amici ad amici.  Friends to friends.

Who knows what will come down the line now that Francesco “Ciccio” Liberto has coaxed me into his web of friendship? In the last month, I have encountered many wonderful people and have shared experiences I never thought would happen.

Though my hand-made shoes are incredible, a true work of art, they are not the only “gift” that Ciccio has given to me.   Friendship is the other.  I am proud and humbled to call Ciccio, the grande maestro, my friend.  Mio caro amico.