An American In B: Trapani Time! 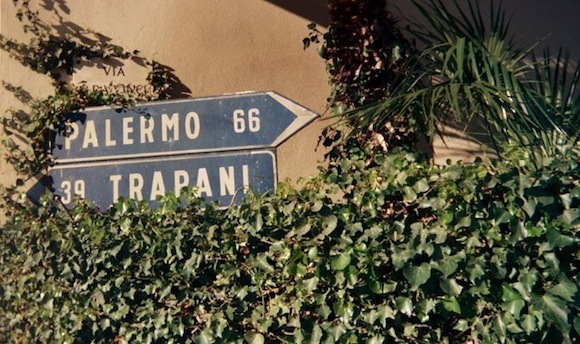 The Palermo-Trapani Derby Game From Both Sides Now

My favorite sportswriter in New York points out the classic utterances of our modern day sportscasters. Recently, he shared that an announcer said of Green Bay Packers quarterback Aaron Rogers: “If there is one quarterback that can not be replaced, Aaron Rogers is one of them.”

I’d like to use this useless hyperbolic to tell my readers that if there is only one province you can visit on your trip to Sicily, then Trapani should be one of them.

As previously written in this space, my town of Castellammare del golfo is actually the epicenter of the Palermo-Trapani derby—the soccer battle between the neighboring provinces of Palermo and Trapani played in Palermo Saturday. (See photo of Nino and Andrea taking sides behind the counter at Millennium Cafe in Castellammare.)

In that light, I decided to make the most of Derby Day, I actually started by going in the opposite direction of Palermo and the stadium. I went to the city of Trapani on the western coast, so that I could then go to Palermo by traversing the entire Province of Trapani on the way to the game.

The Province of Trapani is truly a many-splendored thing. From the rocks that rise out of the water at Scopello to the sands of San Vito to the breathtaking Greek temples at Segesta and Selinunte to the Arab-Norman castles from Erice to Calatafimi to Partanna to the sheer beauty of its rolling hills and promontories, to its wine and olive groves and the salt hills of the cities of Trapani and Marsala, the Province of Trapani delights!

Then, to bookend Derby Day, the day after I  rode a historic train all through the Trapani towns in the Valley of Belice: Partanna, Santa Ninfa, Gibellina: beautiful countryside with wine and olives all grown in towns completely destroyed by an earthquake in the 1960s. The aftermath of this earthquake is a textbook study of Italian politics. I’ll just tell you here that the reconstruction of these towns was handled so shabbily and shamefully by the national government, and the citizens of the valley were left feeling so abandoned by the State, that at one point they refused to pay taxes and their youth ripped up their military draft notices.

In preparation for Derby Day, I also visited the Front Office of Trapani Calcio, meeting with Marketing Director Sandra Piacenza and General Manager Annemarie Collart Morace. Annemarie’s husband is Vittorio Morace, the owner of the team, having saved it from potential non-existence about 5 years ago. Morace, from Naples, is the king of Ustica Lines, that runs hydrofoils from Trapani to the local islands as well as boats to Naples and Tunis. He took the Trapani company from 3 to 30 hydrofoils and having succeeded in business in Trapani, he decided to give back to the community by purchasing Trapani Calcio when no actual Trapanese wanted anything to do with it.

“Trapani soccer was in bad waters,”  Annemarie told me with well-chosen words. So what better person to rescue such a team than a ship magnate? The rest is history: he took the team from Eccellenza, through Serie D and Serie C and got them promoted to Serie B—all in five miraculous years. Really a miracle. This sort of thing just doesn’t happen.  “All Trapanesi adore my husband.” Annemarie said, a statement concurred by Mayor Vito Damiano declaring Morace an honorary citizen just a few weeks ago.

So now the team has risen to Serie B and by the simple twist of fate of Palermo falling to B, little Trapani gets to play big, bad Palermo in Palermo at the Stadio Barbera, a Serie A stadium and in fact a 1990 World Cup stadium. Showtime! 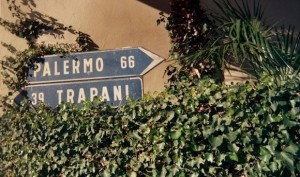 The return match will be played in Trapani in April. I bring this up to note that once Trapani was promoted to B last June it created the need for another miracle: getting the Trapani Provincial Stadium up to Serie B standards. If this couldn’t be done in three months, then Trapani might have found themselves playing their home games in Palermo!! But Mr. Morace pulled it off in just that brief time, including a new press room, a new hospitality area and the installation of all the security measures necessary—single-entry turnstiles, ticket barcode scanners, etc.—-because in Italian soccer, fan violence is never a surprise.  In Annemarie’s simple but profound words, “I wish soccer could be played just for sport.  It’s sad.”

Which is why Annemarie took me through their community schools program, “A Kick to Violence”.  “I’m from Holland,” she told me. “I know the importance of sport. Here sport is forgotten in the schools, but one more child playing a sport is one less at-risk child.” So she and the organization work tirelessly in the schools throughout the province to develop a new mentality.  And just maybe discover the striker of the future, as Trapani runs many soccer camps and training schools to develop talent.  (fyi: Palermo has one Sicilian player, Trapani eleven.) Community tie-ins are also on display game days with entertainments such as local marching bands and twirling exhibitions.

And Annemarie has also taken the business side of the team to a new level. Season-ticket sales are up to 2,300, which for a 7,000-seat stadium isn’t bad. On-field billboard advertising has also increased dramatically—the ability to mention that Serie B games are seen on SKY being a boon to sales.

Yet, Annemarie knows how fragile fan support can be.  After a fantastic start on the field and at the gate, Trapani has found wins hard to come by and declining single-game ticket sales reflect that. Annemarie agrees all too knowingly with the John Sterling Marketing Maxim, “Winning is the best promotion.”

As often happens with Derby games, each side arrived at game time with more urgent needs than who gets bragging rights. Trapani has been falling fast and the week prior lost at home to a team that was in Serie C with them last year. Not good. After a fast start in Serie B, the team has now been graced with the official media status of “crisis”.

Palermo has been moving in the opposite direction. After, let’s say, a sluggish start, they haven’t lost since Iachini became coach, and in fact have not allowed a goal at home. Not always exciting, this rosanero club, but I can’t argue with the rise through the standings. Since I last wrote, Palermo and Varese played to a 0-0 tie in Palermo and won at Avellino 2-0 with  an-early goal by Lafferty and a late goal by Hernandez. By the way, 0-0 games are often scoffed at by soccer haters. But 0-0 games can be very exciting. Unfortunately, the 0-0 game against Varese was not one of them. It was the most boring sporting event I’ve attended since I walked out of a New England Patriots NFL game after an eventless 55-minute first quarter.

Given the above, the derby game was really just what this season is all about: Trapani fighting to stay in Serie B, Palermo fighting to be promoted to Serie A.

Palermo won 3-0, but this is really a case of the score not reflecting the game. The first half was a snoozer, finishing 0-0, but Trapani had the better chances. Palermo started to show more life as the second half started, but nothing really happened until attacker Paolo Dybala got injured. This created a situation similar to Lou Gehrig substituting for Wally Pipp. Dybala out, Andrea Belotti in, and Palermo was off to the races.

Belotti, already heroic in prior off-the-bench stints, had two assists and a goal, so in effect the final score was Belotti 3, Trapani 0. The first assist was a great piece of footwork past two defenders before calmly passing into the scoring box to the open Lafferty, who rifled it into the net. Now down a goal, Trapani created numerous threatening scoring chances, mostly on counters, but soon Belotti provided another clinic on how not to give up on the ball, followed by a sweet touch to Captain Barreto, who sweetly-touched the ball himself past the Trapani goalie to make it 2-0. The third goal was a devastating shot at the top of the box off the right foot of Belotti, who plays by the theory that you cannot score if you do not shoot.

Belotti is one of these many players that any team could have had, but that Zamparini and Palermo signed. Now Zamparini is already getting offers for him from the big Serie A clubs. Meanwhile, this Lafferty kid has obviously lived up to my pre-season hopes and it should be mentioned, that while no one in Palermo is missing Gattuso behind the bench, it was Gattuso who brought Lafferty here, so there’s your silver lining in the Gattuso debacle.

Defensively, I’d like to acknowledge  Ezequiel Munoz who is playing Serie A defense in Serie B.

Now for the fans a derby is all about bragging rights. Many Palermo fans didn’t dignify a game with Trapani to be a real derby, “There’s only one derby”, they’d Facebook, “and that’s versus Catania.” A bit of snobbery there even though some Trapani fans easily countered with, “Actually, there’s only one derby, Trapani-Marsala.” To me it’s a geographical derby but not much of a rivalry since these two teams have almost never met, and have never met at this level. Plus, as I have well written in prior writings, Trapani is full of Palermo fans, if only because they never had to choose between them since they rarely play each other.

Which brings us to the wonderful business-model of LegaCalcio necessitated by the never-ending fan violence in Italian soccer stadiums. The law is clear. Fans from the area represented by the visiting team can’t buy tickets unless they are a season ticket holder of said visiting team—season ticket holders being issued a kind-of soccer i.d. card fully vetted by all levels of Italian police. So 450,000 residents of the neighboring Province of Trapani were not legally permitted to buy a ticket and enter the stadium. In fact, only 600 of the 2300 Trapani season ticket holders were given such permission—being seated in the caged-in visitors section. I get the security concerns, which in other stadiums even this weekend reared its ugly head once again, but as Annemarie Morace said, “It’s sad.” Here you have a potential to fill the 40,000-seat Palermo stadium for a Serie B game, and you tell 450,000 people living within miles of the stadium they can’t come.

Final attendance was about 20,000—in a 40,000-seat stadium.  It was announced with great fanfare as the largest attendance of the season, but to me the reality is the stadium was half-empty. #smh