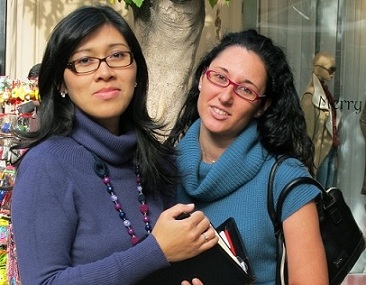 Everybody is a romantic at heart and all couples about to take that big step dream of the perfect, romantic wedding.  And what better setting could there be than Sicily?  Whether you dream of tying the knot on golden sand, in a Baroque palace or beneath geranium-bedecked balconies in one of the island’s lesser-known little towns, Sicily has something to offer you and Amuri Wedding Planner can make that dream come true.

Amuri Wedding Planner, run by Barbara and Hikari, is based in Palermo but can arrange weddings anywhere in Sicily.  Barbara is a native of Palermo and Hikari is Indonesian with Japanese ancestry.  The two met when they were studying Japanese in Tokyo but lost touch when the course ended.  Five years later, in one of those happy coincidences which so often happen in Sicily, Hikari, who met her husband there, found Barbara again.  The two decided that they would make a good team and Barbara, who had been working in tourism, had begun to think about how she could help people discover the largely unknown joys of Sicily and had seen the island’s potential as a wedding destination.  Hikari had been working in hotel marketing and had organised many events for clients so the two women’s skills were an ideal basis for starting up a wedding planner company.

Their next task, of course, was to choose the company name and we are sure you all want to know what “Amuri” means:  It is a Sicilian word for “love” but it also represents Barbara and Hikari’s philosophy:  they believe that love is the strongest of our values, speaks  to all people in all languages and can cross any barrier, including that of time.  So Amuri Wedding Planner the company became, celebrating the power of love and its triumph over all things.

Having travelled the world and made contact with people from many cultures, Barbara and Hikari are good listeners who take the time to understand the real needs, wishes and personalities  of their clients. Combine this insight with the beauty of Sicily, the warmth of its climate and its people and you have a winning combination!

Another special feature of a Sicilian wedding is, as you would expect, the food and Barbara and Hikari usually suggest a menu based on local traditions and ingredients.  On one memorable occasion when the Temple of Concordia at Agrigento was the backdrop for the wedding,  guests helped themselves to canapés served on a bed of almond blossom petals and olive branches which represented the Temple. Some couples prefer a mix of traditional Sicilian and international food and Hikari can even bring a touch of Japanese tradition to the food if the couple request it.

Most of the couples who ask Barbara and Hikari to plan their wedding choose a beach location but weddings have also been arranged in little villages and the countryside.  The most unusual request the pair have received was from a couple who wanted them to arrange a “living together party” so that all their friends could join in a celebration of the couple’s life together.  The group enjoyed a beach brunch and then they all went off in a yacht  to continue the party for several days.  And the most romantic request?  Ah, this was not for a wedding but for help with the proposal:  The couple had returned to Sicily because they had spent some happy holidays on the island some years before and the future bridegroom asked Barbara and Hikari to book a whole cinema, which the couple had visited on one of these holidays, just for them.

After twenty minutes or so a clip about the couple’s life together flashed onto the screen and the gentleman popped the question.  Unknown to the bride-to-be, outside a carpet of flowers was ready and a bus bearing the sign “Just for you – I love you” was waiting to collect the ecstatic couple.  As the bus departed to take them on a little tour of the town, a violinist started to play and a singer sang a serenade.  Life doesn’t get much more romantic than that, does it?

For your Sicilian wedding plans, for that special anniversary or to talk over plans for other romantic events, do contact Barbara and Hikari at Amuri Wedding Planner.  They are such stuff as dreams are made on.