An American in B: Palermo Meets the Millers, I Meet Trouble 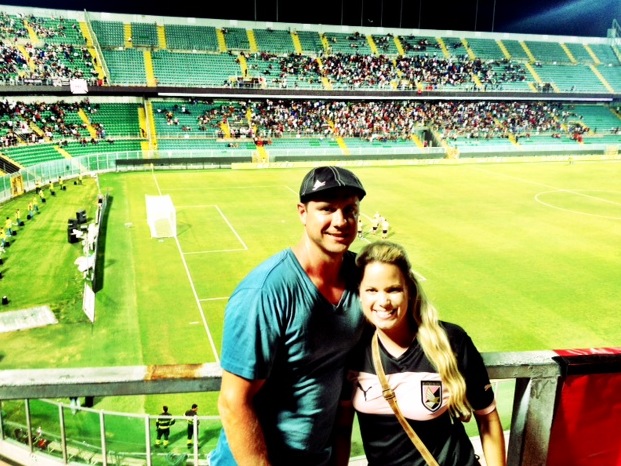 The Serie B season, of which I am here to write about, hasn’t even started yet and, yet, I’ve already been attacked by an opposing fan. This could be a long season. It happened a little after 4am in Palermo and  had the potential to ruin an otherwise wonderful day tour-guiding the Millers. 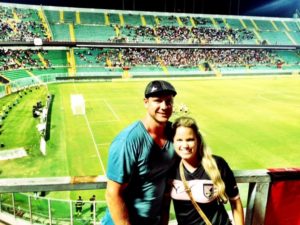 The Millers, Jillian and Michael, are a young and I think still-newlywed couple from Southern California. Jillian is the one with Sicilian blood from the Costantini family of Messina. They were on an Italian holiday and wanted to spend three days in Palermo. I agreed to show them around because, among other reasons, Palermo is a great place for me to go to escape my hometown fishing village of Castellammare del golfo, which by Ferragosto grows from a population of 15,000 to over 50,000 and every one of the tourists brings a car!  Seriously, pedestrians need to take a number to cross the street. The flip side is the city of Palermo is empty and thus I eagerly agreed to meet the Millers.

They were great tourists because they arrived wide-eyed and willing to see any and all sides—the heart and soul of Palermo. On the day in question, Saturday, Aug. 17, we met around 2pm to go see the soul: Monte Pellegrino and the cave where Santa Rosalia, the beautiful patron saint of Palermo, lived the life of a virgin hermit as well as performing heroics 400 years after her death that saved Palermo from a plague. Unless I hear differently from my editor at Times of Sicily, I will leave it to a real Palermitano to write about the life of Santa Rosalia, aka La Santuzza, but for now I’ll just say the mountain-top grotto is not to be missed. Interestingly it was Michael who pointed out the little notes tucked away in the crevices of the rocks of the cave asking Rosalia for this and that. I joked with the Millers that it’s better to write a letter to La Santuzza than to Juliet as they do in Verona, just like the movie, not realizing how that would be proven true later on. At 4.37a.m. to be precise.

I next walked the Millers the rest of the way to the panorama-to-die-for overlooking the sea in front of you, Capo Gallo and Mondello to the left, and Palermo to the right. We were standing on the edge of what Goethe called “the most beautiful promontory in the world.”  That this much natural splendor can be reached by the city-dwellers via a 20-minute bus ride (or a beautiful uphill hike) is a miracle in and of itself. 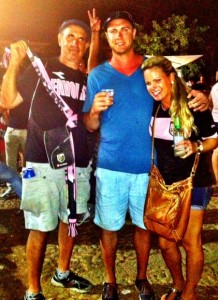 The Millers I’m sure will have more to say about this upon their return to America, but for me, let’s fast forward to an evening when, having seen the soul, I showed them the heart, starting at the foot of the same mountain, in the green expanse of Parco della Favorita where we find  the Palermo soccer stadium, Stadio Barbera, aka La Favorita,  for a Coppa Italia match between Palermo and Hellas Verona.

Now to be chronological, I will report to you now what I didn’t find out until later:  while the Millers and I were enjoying a pizza with tuna and onions at Burro’s (near the stadium), a small group of violent-prone Palermo kids who masquerade as soccer-fans decided to throw, I’m told, rocks and eggs at the bus bringing a small contingent of Verona fans. Palermo fans or not, I just refuse to chalk these incidents—of any team—up to “culture”. It’s not culture, it’s criminal and I hope those guilty are caught, and among other penalties, should be forbidden from wearing anything connected with the team of Palermo. They are not real fans, they use sports as a cover to release their own violent nature and it is the main reason more and more true fans stay away from the stadiums all over Italy. Fortunately, I don’t think this is usually the case in Palermo, but we’ll see.

However, like I said, that happened unbeknownst to us while we were eating. We then went to the game which was surprisingly well-attended for being played during the Italian vacation week. The Curva Nord was packed and our American friends got to experience the vitality and vocality of European soccer matches. Palermo lost—and thus were eliminated from Coppa Italia—but the club played with energy and as often happens in soccer, they dominated everything except the final score (which was 1-0 Verona, thanks to ex-rosanero Luca Toni being in the right place at the right time). Our new coach Gattuso was ejected after an obvious handball was not called against Verona. This really got the fans and the team going, and hopefully will set the tone for the Serie B campaign that starts this weekend (probably with Gattuso suspended).

After the game, the Millers were impressed by my successfully talking a Palermo policeman into calling us a cab right in front of the stadium, a cab which whisked us to Piazza Garraffello and Piazza Magione where the Millers saw Palermo nightlife, and, wearing Palermo gear, they easily slipped into some not-so-easy bilingual conversations with the locals. However, it was Palermo gear that would soon work against me.

The Millers decided to return to their hotel and I dare say other than a pani ca’ meusa (spleen sandwich) that didn’t go over with the Americans as well I might have liked, they thoroughly enjoyed their time in Palermo. I put them in a cab at the fruit drink kiosk in front of La Cala, the city’s oldest port,  around 2 a.m., and wished them good travels. For me, though, the fun had not ended….

After enjoying a couple hours at surprisingly the most enjoyable and entertaining late-nite spot in Palermo—the 24-hour coffee shop, Bar Bristol—I found myself walking down Via Roma, my official Palermo team-scarf dangling innocently from a belt buckle. However, that was enough to raise the wrath of a young Verona fan who, looking back now, I’m assuming had been roaming the streets looking for Palermo fans to attack as revenge for those so-called Palermo fans that attacked the Verona fan bus pre-game. (See??  I have to pay for their crimes. Life can be so unfair.)

He came up behind me and and I felt his hand going around my neck and instantly backed away. He then said, “Let’s be friends” but when I saw his fist closed as if holding stones or glass, or maybe an egg, I knew for a fact this was not the beginning of a beautiful friendship. I kept looking at him like, “What’s with you?” He then tried a swift kick to my groin, but two-years of Mariella Lorito Zumba classes in Castellammare del golfo had my body nimble enough to get out of the way of his attempt. At this point I verbalized “What’s with you?” in English, which was smart of me because I wanted him to think that maybe I wasn’t a season-ticket holding Palermo fan, but just an American tourist with a Palermo scarf.  Also remember, I didn’t know about the bus attack earlier, so I wasn’t faking when my demeanor suggested that I had no idea what he was so upset about. After all, Verona had won the game!!  I did, though, know enough about the history of the ultra fans of Hellas Verona to know this could be trouble. I just kept asking “what’s with you?”  I must have convinced him I was clueless as to what in particular was angering him some six hours after and six kilometers away from the game, because he started walking away, pointing at my scarf as if informing me of the reason for his ire. He was now explaining himself to me! What a turn of events!!

Well, I’m sure it all could have ended much worse, or could it have? In the end, he had no chance because apart from the Zumba lessons, I had La Santuzza on my side. And who was on the Verona kid’s side? Romeo and Juliet? Let’s be real: I win that hands down.