On the 25th October 2012 the Italian American Museum in Manhattan’s Little Italy played host to a book presentation and signing of ‘An Italian American Story’ by the talented author Susan D’Angelo Mannino. This personal memoir takes us on a journey through the generations of the author’s family from Northern Africa in 1943 all the way through to modern day Queens in New York City.

This book is promoted as being accessible to ‘every generation of Italian Americans’ and I agree that readers of any age could not fail to be drawn into the emotions of this powerful story. Anybody who has Italian family or who has even spent time with Italians can find a character or episode that they relate to. The introduction of the book takes us to 2006 when Italy beat France 5-3 in the World Cup and I was taken back in an instant to my own celebrations that day. I believe that anybody connected to Italy can remember exactly where they were for this exciting occasion and this immediately makes the reader feel part of this journey down memory lane.

The sequence of events that brought together the author’s family are extraordinary and give the sense that it was truly ‘la forza del destino’, or the force of destiny, that brought Mrs D’Angelo Mannino’s parents together.  The first chapter that takes us on the journey of the author’s Grandparents from Northern Africa to Sicily during World War II actually feels like a fictional novel as the events are so compelling. When I was then reminded on the following pages that this is actually someone’s true life story I felt an immediate compassion and bond for the family in the book. This feeling of empathy continues through to the end of the book and I laughed out loud on several occasions and was even moved to tears by the central story of the Sicilian patriarch Giovan Battista D’Angelo.

I was amused by how much the dynamics of the relationships within this typical Sicilian-American family in the 1970s and 80s relate to families in modern-day Sicily. In one episode we are told how the author is woken everyday by a phone call from her Mother telling her to make sure that she takes her brother his morning coffee in time so that he isn’t late for work. This reminded me of many recent occasions when Sicilian women of my acquaintance get up at 5am just to make sure that their husbands get their morning espresso before heading off to work. Another example is how this same brother is allowed out by his parents without an early curfew unlike his sister who has to be back by ten o’clock even in her later teen years. I know many Sicilian girls who even now are only allowed out if accompanied by their brothers. It is episodes like this throughout the book that make the book completely relatable to the reader, and actually give hope to the thousands of Sicilian girls currently going though their own Father-Daughter experiences!

I would thoroughly recommend ‘An Italian American Story’ to anybody with an Italian family or even with an interest in the Italian way of life.  Within this book we are shown lesser known idiosyncrasies of the Italian culture along with the better known aspects such as coming together for meatballs and pasta on Sunday! 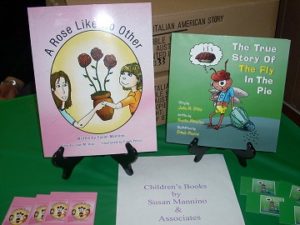 Susan D’Angelo Mannino is also the author of two children’s books and is the co-author of a soon to be released historical fiction novel entitled Life is a Great Game, written together with Salvatore Cottone. This novel is based on a real sporting event that takes place in Sicily during World War II surrounded by an intriguing fictional story involving the history, the politics, and the Mafia in that time period. It also shows the poignant portrayal of Sicilian-American civilians and soldiers and their double loyalty between their love for Sicily and their appreciation of America.

More information about Susan D’Angelo Mannino can be found on her website at www.susanmannino.com where you can also order a copy of ‘An Italian American Story’.