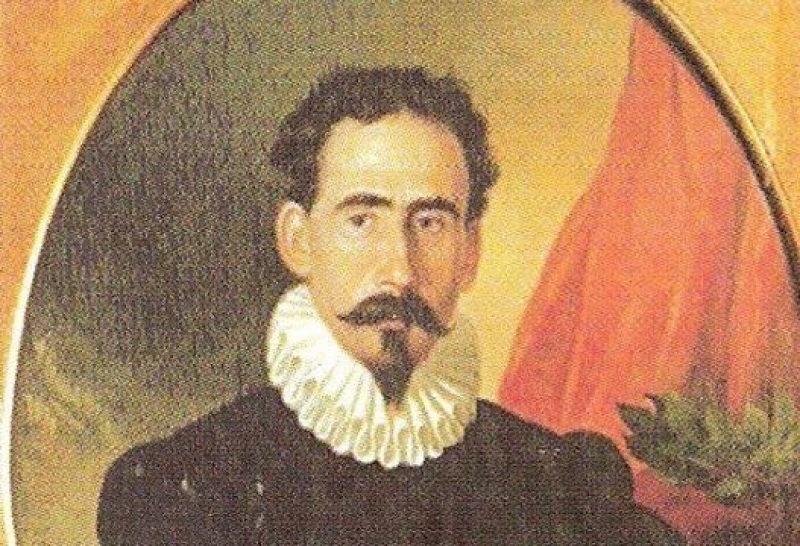 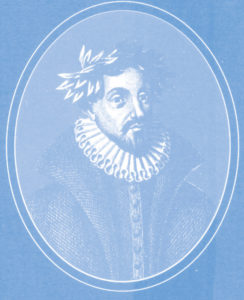 Antonio Veneziano (1543-1593), notwithstanding the fact that he was acclaimed as the greatest poet of the Sicilian Renaissance whose fame endured for centuries after his death, does not appear on modern Sicilian consciousness even as a faded memory. In his reputation as a poet, there is no one in the Sicilian landscape that comes close to him. Vincenzo Di Giovanni wrote this hyperbolic praise:
“He was the best in our country: he possessed a sharp and keen mind, he was extremely learned, his style was heroic and sublime and he excelled in performing deeds. His canzuni were so praiseworthy that everything beautiful was measured against him.”

In Sicily, if people heard a beautiful poem and did not know who the author was, they automatically assumed it was written by Veneziano. Nevertheless, he was a prolific poet who penned more than 800 octaves which are self-contained little jewels of wit, ingenuity, inventiveness and originality that have served as models for successive generations of poets, not only on the island but in Italy as well.

Convinced that Antonio Veneziano’s poetry is a treasury worth studying and made known to everyone, the present writer published Ninety Love Octaves, (Legas, 2006), the only work available in English. If English-speaking people read his work, his reputation would soar.

My interest in Veneziano initially was sparked by his insistence on using the Sicilian language and his highly controversial and problematic life style that likened him to such “accursed poets” as Francois Villon and the bad boys of French poetry: Baudelaire, Verlane and Rimbaud. I was intrigued also by another puzzling peculiarity in Veneziano’s work. I could not reconcile his sublime poetry with a man who was considered a scoundrel, too free with his sword as he was with his tongue, whose mother disowned him and who spent more time in jail than he did outside of it. Antonio Veneziano was an interesting character worth studying.

Veneziano was a staunch defender of the Sicilian language, who tried to stem the growing influence of Tuscan as the hegemonic literary language of Italy. He chose to write in Sicilian, not only because he knew that writing in one’s native tongue was essential to express his innermost thoughts and ideas, but also because he wanted give luster to the language of Sicily, which had been the first poetic idiom of Italy in the thirteenth century. Knowing that all the great poets of the past had written in their native tongues, he asked rhetorically “and I who am Sicilian have to become a parrot mouthing the language of others?”

True to his conviction, Veneziano wrote primarily in Sicilian. His Canzuni, an eight-line poem of hendecasyllables with alternating rhymes. It is the most common composition in Sicily. Giacomo Lentini of the Sicilian School added six lines to invent the sonnet. Veneziano’s devotion to Sicilian can be seen when, accused of murder, he used Sicilian instead of Tuscan to proclaim his innocence. In another case, accused of violence against a herd of sheep grazing on his land, Veneziano presented his written defense in Sicilian, while his accuser wrote in Siculo-Tuscan and the Judge rendered his verdict in Latin.
But this, of course, is not the only reason for wanting to celebrate the work of Veneziano. He stands as the universally acclaimed prince of Sicilian Renaissance poetry whose influence and importance was wide and lasting. He was so admired not only by the literati but by the Sicilian people that many works with which he had absolutely nothing to do have been attributed to him.

Antonello Veneziano was born in Monreale on January 7, 1543. His father, Antonio Veneziano, had married three wives and had children from all three. Antonello, (his original name until he changed it to Antonio after his father’s death) was the third of seven children his father had with his last wife, Allegranza Azzolino. When Antonio was twelve years old, he entered the college of the Society of Jesus in Palermo. After studying in Messina, he was sent to Rome to complete his studies, but his vocation must not have been the strongest for shortly after the death of his uncle Antonino, he left the Society of Jesus. Judging by his behavior after his separation from the order, Antonio provided ample evidence that he was not made for the life of seclusion and study of the Jesuits.

In 1564 he was accused of murdering Antonio Polizzi together with his brothers Nicolò and Giovanni. The three were arrested and spent some time in jail. They were freed, but a few months afterward all three were banned from the City of Monreale for four years. Apparently, Antonio was not involved in the murder and was allowed to reenter the city, thanks to the intercession of the Count of Vicari with the Viceroy. Needless to say, this was not the first, nor the last time that Veneziano had dealings with the courts and jail.

In the thirty years from 1563 to 1593, Antonio was in and out of jail innumerable times, literally spending the best years of his life behind bars. In 1573, for example, he was again in prison for kidnapping (willingly, it seems) a young maid from her mistress, sister Eufrigenia Diana, a Dominican nun. He was embroiled in a dispute about property with his brothers and with his own mother who eventually disowned him as a disobedient son. Not long after his mother’s death in 1574, Antonio donated his inheritance rights to Eufemia de Calogero, his sister Vincenza’s daughter, in whose house he had been staying while banned from Monreale. The donation carried an unusual clause: it stipulated that the niece could neither get married nor become a nun, on pain of losing the inheritance. The nature of the donation invited speculation as to their relationship. Leonardo Sciascia suggested that behind the niece’s identity stood the woman who inspired most of his love poems and whose name, Celia, was used as the title of the first volume of Canzuni. The other women who were the object of Veneziano’s attention are readily recognizable, but not Celia, perhaps to avoid the shame that would be theirs if a love relationship between uncle and niece were made public.

Another event that landed Veneziano in jail was not due to his sharp tongue or violent and arrogant nature. It was an act of piracy for which he cannot be held responsible. The ship on which Veneziano was traveling was captured by Algerian pirates.
When Veneziano was taken to Algiers, another distinguished prisoner had been living in jail for three years. His name was Miguel de Cervantes. The author of the Don Quijote de la Mancha and the Sicilian poet met and developed a relationship of mutual admiration. Cervantes wrote a long poem (twelve octaves) after he read Veneziano’s Celia in which he praised the poems as worthy of paradise. For his part Veneziano responded with a poem that Sciascia termed “incredibily ugly”. The two remained in Algiers for about two years, until they were ransomed.

Once back in Sicily, it was not long before he got in trouble with the law again. Veneziano was arrested and tortured in 1588 on suspicion of having penned a Pasquinade against the Viceroy don Diego Enriques de Guzmán, Count of Alba. Veneziano was eventually released. But when another cartoon appeared depicting the Viceroy as a “jettatore”, (a bringer of bad luck) the poet was jailed in the fortress of Castellammare. In and out of jail, Veneziano seemed unable to control his wit. It’s likely he committed a similar offense against the new Viceroy, the Count of Olivares and was betrayed. Leonardo Sciascia cited an octave, attributed to Veneziano, that speaks of his life in prison:

My friends, my friends, cauldrons and cauldrons bring,
many a cauldron full of lye prepare
for me because I want to wash away
the filthy clothes soiled in the Vicaria prison.
Come running all of you, master comb makers,
Bring all the combs you have in stock for me
And if you cannot find horns readily,
Go saw the horns off those who buried me.

While in the fortress of Castellammare on August 19, 1593, there was a fire that ignited the munitions and blew up the fortress, burying him under the rubble and ending his turbulent existence.
That Veneziano had a terrible reputation as an arrogant, litigious man is readily conceded by most critics. But if you try to get a picture of the man from his poetry alone, you would have a difficult time reconciling the two. His poetry is not autobiographical. As Luigi Natoli noted “In his works in verse or in prose we cannot find the citizen: he is an artist in the true sense of the word for whom the form is all.”

Nevertheless, the true biography is the one that emerges from a study of his poetry. It is in the eight hundred plus canzuni of his poetic production that he expressed his wit, cleverness and artistic persona. He lives more through the voice that emerges from his octaves than from the time-bound accidents of life.

Veneziano who has been called “the Sicilian Petrarch,” was identified by critics as a “Petrarchist with a manneristic line,” with some distinctions. Veneziano used the themes and the psychological situations of Petrarch’s Canzoniere, but most of his themes come from the Sicilian folkloric and popular tradition. At the same time, however, popular themes and folk motifs don’t mean that Veneziano’s style was popular. The language of the poems remains sublime, that is, highly literary without ever descending to using words and expressions out of the mouth of the people. Like Petrarch, he was selective in his use of words, attempting to remove their temporality.

Antonio Veneziano represents the highest point of Sicilian Renaissance poetry and is to be considered the initiator of the Sicilian dialect tradition out of which would come great poets such as Giovanni Meli, Domenico Tempio, Nino Martoglio, Alessio di Giovanni, Santo Calì, and Ignazio Buttitta,
Perhaps one octave can provide a hint of Veneziano’s poetry:

No matter how you strive to give me death

No matter how you strive to give me death
and injure me in every way you know,
you will give only boldness to my courage,
challenging me to fight a greater battle.
If you make crumbs of me, tear me to bits,
believe me, my beloved, do believe,
that you will find in every tiny piece
my faith and a reflection of your face.

Article first published in the Italo-American Times of Los Angeles