Anyone for an Ice Cream Sandwich 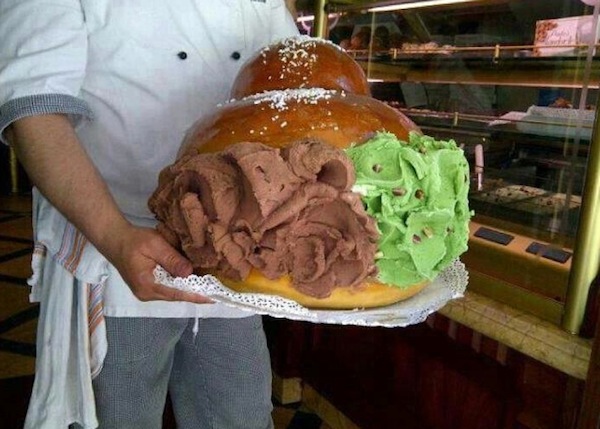 Of course, absolutely everyone knows that ice cream was invented in Sicily. As long as you ignore the fact that there was another version ‘made in China’ 2000 years BC, of overcooked rice, spices and milk which they buried in the snow to solidify. But that is not what I call ice cream. 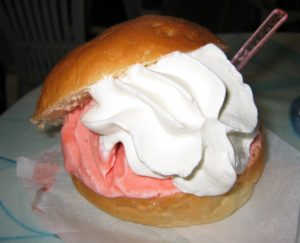 Now is the time of year when those ice cream display cases in the bars and cafés are getting difficult to ignore!

For centuries, the nevaroli dell’Etna (literally the snowmen of Mt. Etna) were trudging up the mountain with their donkeys, during the night, to collect the snow which they stored in trenches lined with straw and sea salt (neviere), on the shady side of the mountain. As they collected the snow and ice all year round the trenches had to be dug deep and today you can still see some of the small beehive stone openings indicating where they are. Soon there were nevaroli in other mountain ranges: Madonie and Nebrodi, and from the Middle Ages it became big business as the ice was sold to butchers and fishmongers and wealthy patrician families in the cities who wanted to preserve their meat, fish and fruit juices.

Up until the Arab domination of the island in the 9th century, the only known sweetner was honey. The Arabs, who are responsible for a lot of those delicious sticky cakes on this island, were already using cane sugar and found that it was growing spontaneously here. They had also brought with them the verdello lemon trees so by combining crushed ice, cane sugar and squeezed lemons those exquisite thirst-quenchers, granita and sorbet, were born. During the summer, the peasants used to make a portion of granita with half a lemon and some crushed ice and eat it with bread which later gave someone the idea of serving it with a soft brioche making it our present day summer breakfast – drool, drool! Left in the hands of Sicilian creativity, the rest is history. 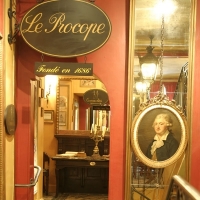 This was the advent of ice cream as we know it today. After a few more centuries of perfecting the recipe and inventing an ice cream machine, in 1686 Franceso Procopio dei Coltelli from Palermo, took his know-how to Paris and opened the first ice cream parlour, Café Procope, where he plied Robespierre, Danton, Marat, Voltaire, Balzac and Victor Hugo with his exquisite fruit sorbets. From then on there was no looking back.

As anyone who finds himself in front of that glass display cabinet with rows of soft, creamy, mouth-watering ice cream will know, it’s one of those hard decisions in life trying to decide what flavour to choose. Things get even more complicated when trying to figure out how many scoops of different flavours will fit into that cone. Perhaps two? No, let’s try for three. Again, this is where the Sicilian genius comes into its own. Why not slap some bumper scoops into a fresh brioche, perhaps with a dollop of cream on top (con panna or senza panna: with or without cream) making it into – in an anglo saxon fantasy – an ice cream ‘sandwich’? Brilliant idea! It’s a meal in itself. No slaving over a hot stove in the summer. This is something unique to Sicily. I’m pretty sure that ice cream sandwiches do not exist in other parts of Italy.

Now after one of those how can anyone go and buy some of that surrogate stuff that they sell in the supermarket? This is freshly made every day in summer. The flavours, apart from the all year round classics, are seasonal. At this time of the year you will find mulberry (gelso), apricot (albicocca). Later on there will be water melon (anguria) – my favourite! – and peach (pesca). In my opinion, it’s one of the few, or many, whichever way you see it, joys in life sitting down to one of these heavenly desserts either licking or spooning it (either way you still get quite a lot down your shirt front) not even thinking about how many calories you might be swallowing. It doesn’t matter what flavours you mix together, they all taste wonderful and I have it on good authority that eating just a fruit flavour one is definitely NOT as fattening as perhaps chocolate and panna cotta. But who cares!

And the granita? It depends on what area you are on the island as to which particular flavour you will find. If you are in the Messina area you will find the coffee granita with a huge dollop of cream on top. They also eat a lot of the strawberry one too. Over Siracusa way you will find the almond granita which is made from grounded almonds and almond milk. Absolutely delicious! Instead, around the foot of Mt. Etna, in Bronte and the surrounding towns you can taste the pistachio one. Naturally, it goes without saying, that they should all be eaten by dunking a fresh brioche into them. 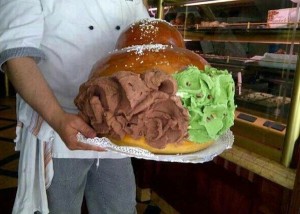 In September every year we have the International Sherbeth Ice Cream Festival which is held in Cefalù. For ice cream lovers you can taste until it is practically coming out your ears, at a very modest price. Various stands from all over the world produce some of the strangest flavours imaginable and you can even vote for your favourite at the end of the five day tasting marathon.

Why don’t you come and experience this mouth-watering delicacy.. this is just the “appetizer” 🙂 – Come to Sicily, explore and find out more