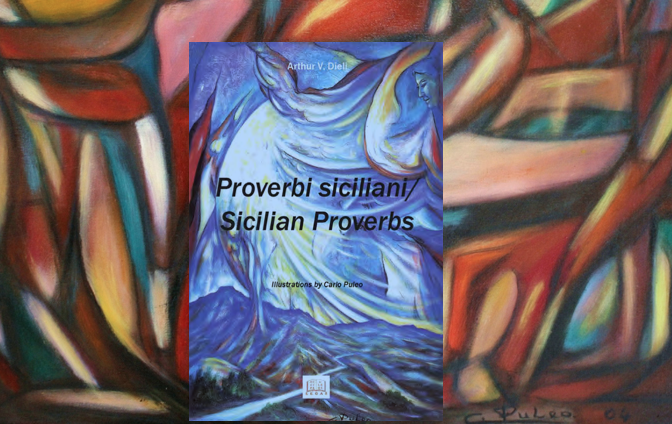 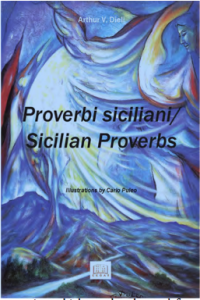 Professor Arthur Dieli’s Proverbi siciliani/Sicilian Proverbs is an interesting book for those who want to know some truths about Sicily and Sicilians, but for the hundreds of thousands of Sicilian-Americans, especially for members of Arba Sicula, the book is a “must have.” The vast majority of Sicilian immigrants such as my parents came from the impoverished lower class. Although they loved Sicily, they were forced to leave in order to provide themselves and their loved ones a better future. They did not mind working hard; they were used to doing it but in their country only for the gain of the landowners or other members of the higher classes. In the United States they would have a chance to go beyond poverty, if not for themselves, then at least for their children. The only words I ever heard from my parents about Sicily were about its beauty, never about the harshness of life there for the masses.

The proverb is the true voice of the common people. Writers and historians tell us much about Sicilians, but they do not include the words which come from the heart. In Dieli’s book our heritage can be observed, felt and commiserated with. When I read these proverbs, I felt as if I was listening to my ancestors telling me how life was back then.
Arthur Dieli, the translator and explicator of the over 1000 proverbs he presents might not fully agree with the proverbs he cites under pruverbiu: “The proverbs are all proven,” or “Ancient proverbs are a little Gospel.” However, he would agree that proverbs do give the listener or reader some insight into the culture of the era in which a particular proverb was created. The thoughts contained in proverbs tell us about life as it was mainly from the point of view of the lower class. The peasant farmer (Viddanu) and his family often lived on the edge of starvation which can be observed from the following proverbs: Cani (dog) – “Bread and water; a dog’s life.” Cuscenza (conscience) – “Hunger has no conscience.” Picca (little) – “Less is better than nothing.” Famigghia (family) – “With a large family, poverty is close by.”

The desperation to find any means to stay alive is seen in the many proverbs which focus on eating. Having just enough to stay alive leads the peasant to eat shamelessly when the opportunity arises (See the proverb under tostu  impudent).
There are many instances in the book in which Professor Dieli not only gives the literal translation of a proverb which may well be difficult for the reader to comprehend, but he then gives a meaningful, figurative version which clarifies the proverb. Here are just a few examples: Spadda (shoulder) “Li megliu parenti su li spaddi.” Lit. “The best relatives are the shoulders.”

This literal translation may be confusing and the reader may well interpret such a translation as only a criticism of counting on relatives for help. Dieli’s version of the meaning is, “Self-help is your best relative.” From a possible negative interpretation, the reader now understands the positive statement. In a sometimes brutally harsh world, the peasant farmer needed to be strong and independent to survive: Matinu (dawn, morning) “Cui nesci matinu, ascia un carrinu.” Lit. “One who goes out in the morning finds a coin.” The literal translation points to the advantage gained by being an early riser which leads to the same conclusion of the well known version, “The early bird catches the worm.”? The proverb is so often the voice of the commoner, represented repeatedly as the Sicilian peasant farmer who is inexorably tied to the land (viddanu – farmer “The earth is made for the farmer”). He stands before us proudly with his hoe in hand (“A lu viddanu la zappa`m manu.”), praises hard work: (caddusi – calloused “Calloused hands are glorious hands.”), and focuses on the reward (renniri – to yield “As you pay the price with the hoe, to that extent the olive grove will repay you for the pruning, fertilizing, and hoeing.”). The peasant’s frustration about his lot in life is evident from such proverbs as: (manu – hand “We have to kiss the hands that deserve to be cut off.”), and (puseri – thumb “The rich man’s pinky is worth more than the poor man’s thumb.”). The thumb enables man to work: the pinky is almost useless for anything. It is the poor man who does the work to provide for all while the rich landowner gets the reward.

The higher classes at all levels take advantage of the poor. Many proverbs indicate the abuses of a king, the court, and the police. Little or no respect was given to cops: Sbirru – cop “God protect us from the Sicilian cop, especially if he’s from Palermo.”).
Apparently, even in earlier centuries Palermo was considered “sin city,” and bribes of all sorts were common. The criticisms of the church and its clergy were usually especially biting, revealing negative feelings of the lower class toward clergy. They are seen as takers, not givers. Church services are done only on payment first. Clergy are depicted as well fed by peasants but as stingy and not to be depended upon: (spirari – hope, expect “Putting hope in a monk is like hoping to catch the wind with a net.”). For the Sicilian for whom silence is precious because of a dangerous environment, gossiping is seen as especially detested, and clergy are the worst offenders: (batia – abbey, monastery “Go to the abbeys and pharmacies to know everyone else’s business,” or “It’s known in the abbey before it’s known by the police.”).

Keeping silent about your plans was an especially valued virtue. There were too many desperate people in their surroundings who would squeal for self gain. Family plans, usually discussed at the kitchen table, were to be kept secret: (tavula – dining table “All that’s said at the dinner table should be left on the table- cloth.”). Many proverbs warn a person to be wary of others (ingannu – deception “There is rarely gain without deception.”). Certainly, people of a higher class are not to be trusted (riccu – rich “When a rich man caresses a poor man, it’s a sign he is going to cheat him.”).
Often, Sicilian proverbs show a particularly wonderful sense of humor. Old people, a person’s age, love, and matri- mony are common targets. For example, old people are called old pots in the fol- lowing proverb: Quadara – pot “La quadara è china di vozzi, pirtusa, e taccuna.”
Dieli provides the precise meaning of the metaphor (quadara vecchia – old pot) as old people who inevitably have ailments but then provides the reader with the literal meaning to gain the comic effect: “The old pot is full of nicks, holes, and dents.” There are, indeed, days when old people see themselves the same way.

Love, with its sweetness, its bitterness, and its foolishness, is a very popular theme in Sicilian proverbs as indicated by the following: (amuri – love “Love, everyone says it’s bitter, but everyone wants to see for himself if it’s true.” It is clearly true that “Love (amuri) doesn’t listen to advice.” And, for a final laugh: annu – age, “Age and peccadillos are usually more than stated.”
Anyone who knows Arthur Dieli personally is quickly made aware of his interest and love for Sicilian proverbs. He can quote a fitting proverb for just about any experience or any occasion. What Dieli presents in this book is only a small taste of the thousands of Sicilian proverbs he has stored in his mind. He usually even says good-bye in his e-mails with a proverb appropriate to the content of the e-mail.

Not only are we Sicilians separated from our old home country, but with the mobility of the American family we have spread out far and wide in our new land. By acquiring books such as Dieli’s Sicilian Proverbs and other books published by Arba Sicula, we can better relate to our roots and our family tree. Sicilian families can maintain closeness and keep something of our Sicilian traditions by sending family members, our children and our relatives some copies of books such as Dieli’s. We have a heritage to be proud of, and we need to keep it alive.