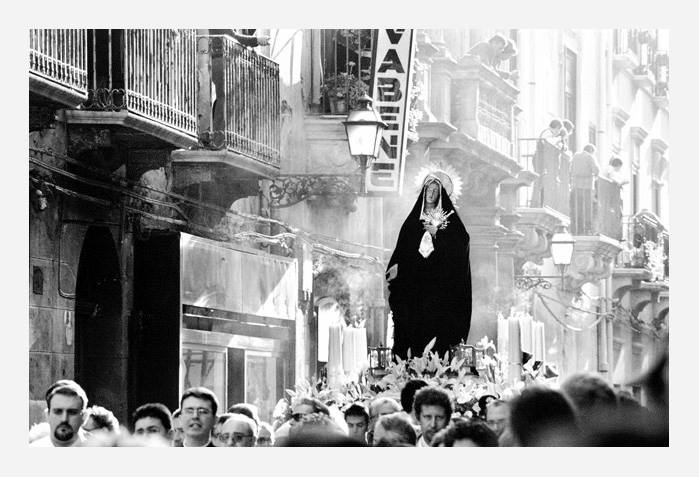 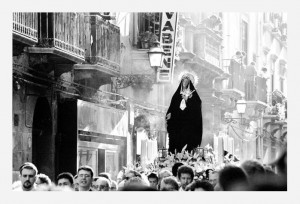 This Lent has been a pilgrimage from ashes to lilies, with snow and sleet in between. Frost and flurries have prevented spring from fully arriving, but in Sicily, crocuses and hyacinths have bloomed for weeks. Soon the faithful will process through the streets carrying statues of Mary. Even at Easter, the Madonna plays a central role in Sicilian worship.

Many Sicilians believe the resurrected Christ visited grieving mother. This belief partly reflects the island’s Punic and Greek past, when Sicilian women observed the difficult transition from winter to spring by mourning for Tammuz and Adonis. The word Easter, in fact, derives from the Semitic goddess Ishtar, who brings back her son and consort Tammuz from the Underworld. Later she was identified with the Greek goddess Aphrodite, the lover of Adonis.

However, the idea that the risen Jesus first appeared to his mother dates back to the dawn of Christianity, even though the Gospels never mention this story. Early tradition includes the Madonna among the woman disciples who visited Christ’s tomb on Easter morning. Over time, folk stories evolved about a separate private apparition. What devoted son would not want to visit and comfort his mother, particularly after she had witnessed the most important events of his life and ministry?

St. Ambrose, Bishop of Milan and Doctor of the Church, concurred. “Vidit ergo Maria resurretionem Domini,” he states in a fourth-century treatise on virginity: “et prima vidit, et credidit.” Mary, therefore, saw the resurrection of the Lord: she saw it first and believed. Sedulius, a 5th century Christian writer, dramatizes this event in his long Virgilian poem Carmen paschale. Prosper Guéranger, the 19th century French liturgist, cites numerous ancient prayers and hymns (especially from the East) that affirm the same.

Perhaps the most moving is the Regina Cæli, sung or recited in place of the Angelus during the Easter season, from Holy Saturday through the Saturday after Pentecost. Legend has it that Pope Gregory the Great heard angels chanting the first three lines one Easter morning in Rome, while following barefoot in a great religious procession of the icon of the Virgin painted by Luke the Evangelist:

Queen of Heaven, rejoice, alleluia.
The Son whom you merited to bear, alleluia,
Has risen, as He said, alleluia!

This antiphon plays an ironic role in Pietro Mascagni’s one-act opera Cavalleria Rusticana, based on Giovanni Verga’s short story. As a church choir sings Regina Cæli off stage, a more pagan rite plays out in the piazza. Turridu Macca, torn between his loving mother Lucia and his vindictive former mistress Santuzza, must pay in blood for cuckolding his neighbor Alfio. He is a scapegoat whom the village sacrifices to Sicily’s endless cycle of death and rebirth. Such tragedies still occur, even on Easter Sunday. As always, the Black Madonna witnesses, grieves, and endures.