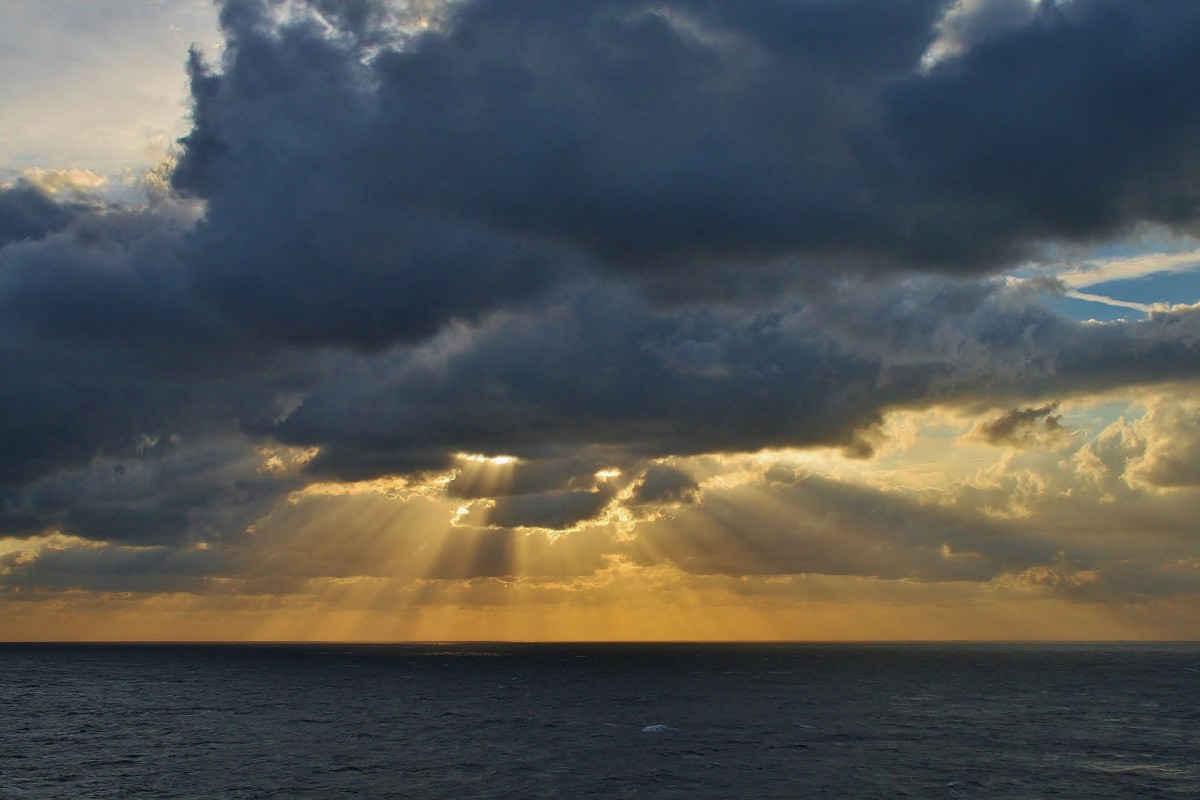 The dictionary defines a sirocco wind as ‘a hot dust-laden wind from the Libyan deserts that blows on the northern Mediterranean coast’.  It is known as the sorokos in Greek, xaloc in Catalan, jugo in Croatian, siroco in Spanish (whence comes the English), khamsin in Egyptian Arabic and scirocco in Italian.  In Sicily, one of the regions with which it is most associated, it becomes the sciroccu.  When the sirocco blows, the island’s climate takes a hit.  Like all extreme variations in weather, the sirocco will affect, not only the physical landscape, but also the mental landscape of the inhabitants. 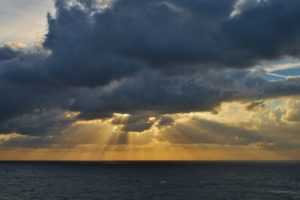 When the desert wind leaves the coast of North Africa, it leaves behind exceptionally dry, dusty conditions.  The gust then meets damper air circulating in the Mediterranean basin, which, as it progresses across the sea gradually turns into cooler air that generates rainfall as it moves up the southern European landmass.  Sicily’s geographical position is such that it feels the hot breath of the Sahara as well as the soggy revenge of Europe’s climatic defences.  The rain that falls from siroccan clouds pelts car roofs and white walls with gobbets of arid red sand, universally referred to as “blood rain”.

Whether spawning heat and dust or humidity and rain, the sirocco can plague Sicilians for several days at a stretch.  Islanders are used to the phenomenon and will tolerate its vagaries with the same resigned fortitude that Lampedusa’s Prince of Salina showed during the family carriage ride to Donnafugata.  The effect on foreigners is more marked, especially the associated problems of stifling heat.

Patrick Brydone, the Scottish Grand Tourist who penned one of the eighteenth century’s most renowned travelogues, A tour through Sicily and Malta, was shocked by the damp intensity of the blast and its over-heated flipside, both of which he described in typically colourful and lucid prose.  For example: ‘It has now blown for these seven days without intermission; and has indeed blown away all our gaiety and spirits; and if it continues much longer, I do not know what may be the consequence.  It gives a degree of lassitude, both to the body and mind that renders them absolutely incapable of performing their usual functions.’

If the constant leaden atmosphere induced a high degree of sluggishness, the heat that arrived with one sirocco, before it could turn to moisture laden cloud, was Brydone’s biggest climatic surprise: ‘I opened the door without having any suspicion of such a change; and indeed I never was more astonished in my life. – The first blast of it on my face felt like the burning stream from the mouth of an oven.’ 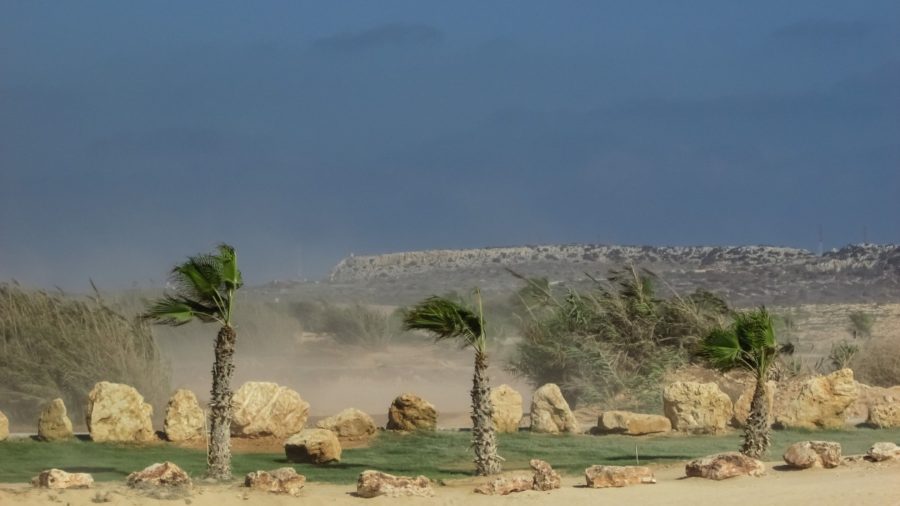 Brydone turned to his travelling companion and shouted that the atmosphere ‘was in a flame’.  You can almost hear him exclaim – ‘My God, Sir, the heat!!’  He attempted a walk, in the fashion of ‘mad dogs and Englishmen’, but had to admit defeat, returning to his upstairs apartment.  He found the air ‘heavy and thick’, the atmospheric equivalent of maccu, that concentrated Sicilian soup made from dried fava beans.  The release came when the wind direction shifted, leaving Brydone to remark that it was ‘difficult to conceive the different feeling of the air’.

Sicilians of his acquaintance wanted to know his opinion, assuring him at the same time that it had been a relatively short bout of heat and that they had known the wind to be much stronger and higher on the temperature scale.  The Britons were deemed ill-advised for having exposed themselves to the rigours of the blast by actually walking in the street. 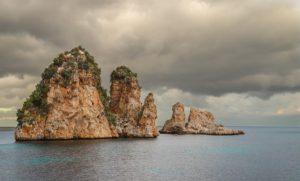 Another traveller, Louis Simond, left his thoughts on the sirocco when he published A Tour in Italy and Sicily in 1829: ‘The S. E. wind (Sirocco) blew all day, and the whole country looked of a dusty white.  There were in fact clouds of dust in the town, but on the surrounding mountains it must have been the appearance only.’  He approached the phenomenon with a certain sang froid, casually guaranteeing the reader that he ‘felt no inconvenience’.  He put this down to the fact that the sirocco blows more in autumn, winter and spring than it does in the summer, although he did condescend to admit that the wind had the effect of making the vegetation ‘roll up as if attacked by insects’ producing a yellowing result that withered the plants – ‘Fragrant groves of acacias and of orange-trees occupy the fore-ground: but all this to-day was enveloped in dust, and the trees and plants were drooping.’

Interestingly, the Edinburgh Medical and Surgical Journal of 1850 compared the sirocco with Madeira’s leste wind and came to the conclusion, after some debate, that in Sicily the effects where similar to those noted by Simond – with increased summer heat – namely that ‘it evinces all the effects of a hot dry shrivelling wind, drying up the leaves of plants, causing rents in furniture and timber generally’.  The journal concluded that ‘animal bodies’ were negatively affected by the excessive dryness.

Another learned tome, Sketches of the Medical Topography of the Mediterranean, contains a whole appendix on the subject entitled ‘Extract from a Communication of Dr. Benza’s on the Sirocco Wind, principally as it blows in Sicily’.  Dr Benza reports having felt the wind blow as hard and with as much heat in Palermo as in Agrigento, thereby contradicting Brydone who imagined the south of the island would be, by nature, more in the firing line.  We tend to agree with Benza, having experienced its fearsome blasts in both locations.  Above all, however, Benza notes its most deleterious influence on the ‘human frame’ to be felt in marshy areas around the likes of Siracusa – a logical assumption.

Benza’s 1830 diagnosis still holds some weight: ‘a general lassitude or torpor of the muscular system, attended by head-ache and heaviness and oppression of the nervous system, inducing an inaptitude to any exercise, either corporal or mental; everything that is touched is damp and clammy, particularly one’s clothes, which feel as if they had been wrung out of water; appetite impaired; thirst increased; perspiration profuse…’

Benza finished his account with an invocative image of the wind on the horizon: ‘If, during the sirocco, the horizon be clouded, the most vivid and beautiful coruscations, lasting for several seconds at a time, are to be seen.’  The leads inevitably to the gorgeous Baroque Italian verses of Lucio Piccolo, Lampedusa’s cousin, who immortalised the sirocco in these lines: ‘E sovra i monti, lontano sugli orizzonti / è lunga striscia color zafferano: / irrompe la torma moresca dei venti…’ which loosely translates as ‘And over the mountains, far on the horizons / is a long saffron-coloured strip: / the massing Moorish wind bursts through…’

We’ll give the last word to Lord Byron, as he would doubtless have appreciated.  In his poem, Don Juan, he paints one of literature’s most devastating evocations of the wind’s heartless, perpetual power with this simple line in ottava rima: ‘Death rides upon the sulphury siroc’.

They are also authors of Andalucia: A Literary Guide for Travellers, which was also reviewed by the Times Literary Supplement: ‘a thoughtful, thoroughly researched and remarkably well-balanced scholarly guide to the literary history of one of Spain’s most eulogized regions.’

Andrew is the translator of the recently released Borges in Sicily by Alejandro Luque, a travelogue in search of the photographic locations used by Ferdinando Scianna when he took images of the Argentinean writer, Jorge Luis Borges, during his island tour.