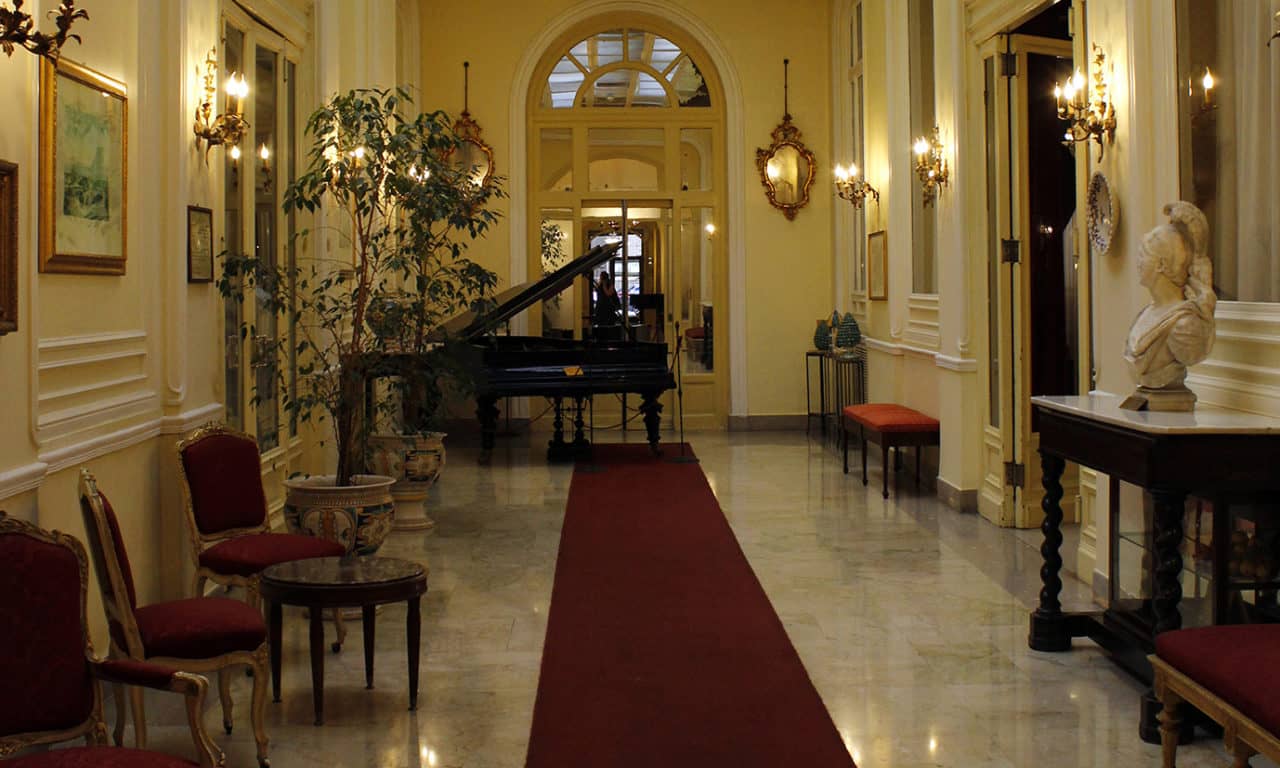 Our new book about Palermo’s Grand Hôtel et des Palmes, Ghosts of the Belle Époque, has just been released by Bloomsbury. The hotel is an icon of Palermo life. Its rooms and public spaces have witnessed the events that have shaped twentieth century Sicily, everything from the suicide of a poet to political intrigues and a clandestine mafia meeting.

The hotel has a long and venerable history. It started out as a private residence for the Ingham-Whitakers, the Anglo-Sicilian family of Marsala wine fame, before being sold to the hotelier Enrico Ragusa in 1874. Wagner was one of the most eminent early guests, looking for inspiration to finish his last opera, Parsifal. A few days after its completion, a nervous Renoir arrived to paint his portrait. Months later came Guy de Maupassant, who asked to see Wagner’s former suite so that he might detect ‘a little of his personality’. The novelist and poet, Raymond Roussel, arrived in the 1930s, but was destined to leave in a coffin.

Arthur Miller, Sophia Loren and Maria Callas were all guests and when Visconti was filming The Leopard in Sicily, the entire cast – notably Burt Lancaster, Claudia Cardinale and Alain Delon – visited the hotel. Lancaster even dined with a Baron who had made the hotel his home for reasons shrouded in mystery. Less illustrious guests have included the occultist Aleister Crowley, Lucky Luciano and other mafiosi. Even Giulio Andreotti, the former Italian Prime Minister, who stood trial for complicity in the murder of a journalist and mafia association in the ’90s opted for the hotel’s Belle Époque opulence.

The history of this historic hotel comes with a cast of characters ranging from the good to the bad and the decidedly ugly.  In many ways the book also details the changes seen by Palermo from the middle of the 19th century to the present day.  As a taster, we have put together a small video montage.

Video montage of scenes connected to the book.

Ghosts of the Belle Époque is available from bookstores or from the publisher and other retailers such as Amazon and Abe Books.  Here is the link to Bloomsbury:

Andrew and Suzanne are also the authors of Sicily: A Literary Guide for Travellers. The Times Literary Supplement had this to say about their book: ‘Sicily is full of such delicious anecdotes: it is not only a literary signpost for travellers in an ancient island, but a cultural guide for anyone who finds themselves in the infuriating thrall of its contradictory and compelling extremes… Sicily is bound to become battered and dog-eared, blotched with caponata and wine stains’.

In addition, they are the authors of His Master’s Reflection, a travel biography in the footsteps of Lord Byron’s doctor and Andalucia: A Literary Guide for Travellers, which was also reviewed by the Times Literary Supplement: ‘a thoughtful, thoroughly researched and remarkably well-balanced scholarly guide to the literary history of one of Spain’s most eulogized regions.’ Andrew is the translator of Borges in Sicily by Alejandro Luque, a travelogue in search of the photographic locations used by Ferdinando Scianna when he took images of the Argentinean writer, Jorge Luis Borges, during his island tour.