A Journey of a thousand miles begins with a single step… 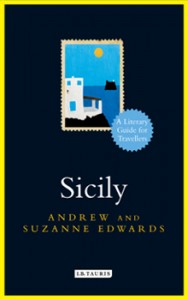 The castle sits atop a rocky spur, overlooking a valley floor covered by a reservoir serving Palermo.  The Norman barons would have seen a river wending its way through the steeply carved basin.  At the foot of the castle, the warren of medieval streets sprawls out across the hillside like an unfurled leaf, or as Carlo Levi pointed out, like a bird with its wing outstretched.  The first kernel of an idea was planted in this place, a place we now call home for part of the year.  Caccamo, like all Sicilian towns, wears its layers of history like a familiar jacket, something it is used to slipping on in order to face the rigours of daily life.  Drawn by an atmosphere that seeps through the very rock itself, we flirted with a short initial trip to the island, courting several properties; a house meant that we could finally spend part of the year discovering the many facets of Sicily.

That first year, armed with the recommended guidebooks, we learned of the geographical and historical sights of each region, dutifully trailing in the knowledgeable wake of those who, for the traveller’s benefit, had carefully drawn maps, studied the transport links, visited numerous hotels and recommended the best restaurants.  Without wishing to denigrate the multi-faceted skill of writing a practical guide, we found we needed something else, something that really captured the island’s soul.  Writing being our passion and literature our heart, we decided to let authors speak for themselves.  The following summer, other books were to join us, including Goethe’s Italian Journey, The Leopard, Salt in the Wound and those written by Andrea Camilleri, whose tales of Commissario Montalbano were becoming increasingly popular overseas; where better to read them than in the place where they had been conceived?

We then discovered a hidden gem, the Spanish book, Viaje a la Sicilia con un guía ciego (Journey to Sicily with a Blind Guide), written by the journalist from Cádiz, Alejandro Luque, a fellow Sicilianophile.  The blind guide in question is the Argentinian maestro Jorge Luis Borges, who toured Sicily in 1984 with the photographer Ferdinando Scianna.  The book interweaves anecdote from Alejandro’s own journey with his friends in search of Borges’ photographic locations, the literature of the island and meditations on the images themselves.  Like the butterfly in chaos theory, small wing beats have larger effects, leading Andy to be asked to translate the whole text, which is hopefully awaiting publication.  The first seeds of an idea began to germinate.

Authors inevitably led us to some key destinations and on our ‘must see’ list was the Valley of the Temples, a UNESCO World Heritage Site situated on a ridge to the south of Agrigento.  Having spent a hot but thoroughly enjoyable day walking around these giants of archaeological recreation, stopping from time to time to seek shade under the Saracen olives, we decided to take the inevitable road home through the town’s rather unlovely suburbs.  Heading downhill away from the temples, a small sign jutting into the road informed those passing of the birthplace of Nobel Laureate, Luigi Pirandello.  Happy to take a detour, we found that Pirandello’s birthplace was now a museum or ‘LiteraryPark’ – a wonderful idea designed to celebrate the work, lives and surroundings of prominent writers. Other Literary Parks have been dedicated to the likes of Salvatore Quasimodo, Elio Vittorini, Leonardo Sciascia and Giuseppe Tomasi di Lampedusa.  The unexpected interlude gave us a wonderful insight into the life of Pirandello, a complex man with a tortuous life, whose plays, novels and short stories portray the many faces we humans present to the world.

Books can fall like dominoes; when you close the cover on one, another falls open prompted by its neighbour and so it proved.  Our forays into the Sicilian countryside were beginning to resemble a mindmap of our reading habits.  The time had come to put some sort of order to our thoughts and to share our passion for the island, its authors and foreign observers.  Not wanting to simply recount the bare bones of a journey, our book follows the authors and their lives through Sicily’s layers of history and geography.  It could be considered a tour, a reference, a biography, a travelogue, all or none of the above; perhaps a tasting menu to suit all palates.

We were lucky enough to be commissioned by a publishing house, Tauris Parke, who were planning a series that fitted this structure perfectly and, subsequently, to have discovered the website, Times of Sicily, with its community of like-minded souls.  It is with trepidation and hope that we pass on our guide to a wider audience.  Sicily has so much to say, so much that needs to slice through the clamour of gossip, so much that needs to batter at the door of “la leggenda nera”.

Following in the path of literary greats, or for that matter the also-rans, takes you on a journey through Sicily’s ancient past; its eras of ever-changing rule; its complicated present.  It compels you to listen to its tales of struggle, of fading aristocracy, inspiration, decadence and romance, to its cri de coeur.

Sicily: A Literary Guide for Travellers

Tobias Jones, author of The Dark Heart of Italy, comments:
“It makes such a convincing case for Sicily – as much as London, Paris or New York – to be recognised as central to any history of western literature. I had no idea that the cast of characters who resided on, or were inspired by, the island was so huge, or so intriguing: everything from literary A-listers to washed up wanderers. It was a wonderful read, enlivened by so many anecdotes and snap-shots.”

The book is available from bookstores and online retailers like Amazon, Barnes and Noble and Waterstones.
Here’s a link a link to Amazon and to the publisher’s website, Tauris Parke
[geo_mashup_map]