A Breakaway Autumn Weekend in Palermo 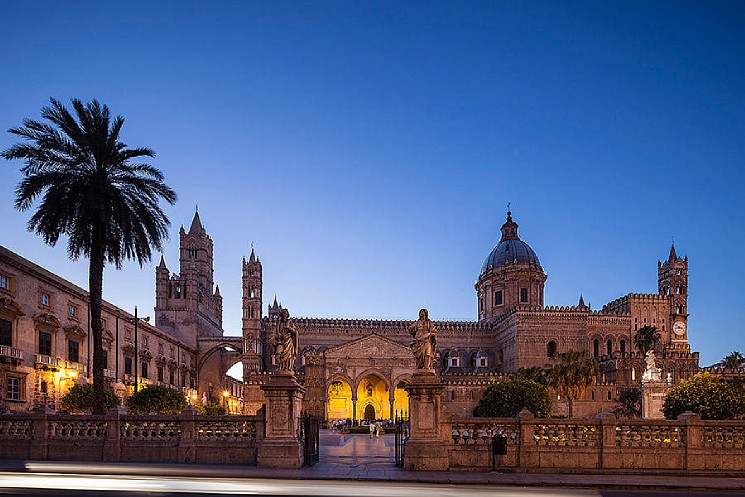 What can you do during a weekend in Palermo? That’s the question I’m often asked by friends or colleagues who decide to visit the capital city of Sicily.

Given that I’m not a tour guide or an art historian, I would like to give some guidelines for people, like me, who after a long week of office-life, usually want to go off for a “different” weekend and are willing to taste some genuinely authentic food, spend a relaxed evening or are ready for a cultural stroll and even feel up for a dip in the turquoise waters of the Mediterranean sea in November. Here you go my friends. 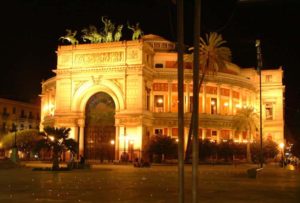 I imagine you would take accommodation near the Politeama Theater, in the city center, well connected to the airport and with the rest of the city in order to also take advantage of the Friday evening as well. Get a map of Palermo city center, and start your evening with a concert in the Politeama, the theater is the prestigious home of the Orchestra Sinfonica Siciliana. Well, if not, take a walk to the other theater, the Teatro Massimo.

While walking Via Ruggero Settimo, take a glance at the Via Principe di Belmont just in case the day after you want to taste a delicious cannolo, a typical Sicilian dessert, an ice cream or just have breakfast on one of the nice terraces outside. Keep on going towards the Massimo Theater, the other jewel of Palermo, the biggest opera house in Italy and the 3rd in Europe after the Opera National de Paris and the Hof-Opernhaus in Vienna. If you are not into “Cavalleria Rusticana”, the Opera of Pietro Mascagni with words written by the Sicilian realist (Verismo) Giovanni Verga; perhaps you prefer Hollywood culture – in which case you may want to know that the final scenes of The Godfather Part III were filmed at the Teatro Massimo.

The Teatro Massimo area is also known for going out, I am sure you fancy a local aperitivo accompaniment to raw oysters at the “Champagneria del Massimo” in Via Salvatore Spinuzza: it’s a good start to get you in the right mood, hearing the locals laugh, soaking up the start of the weekend. On the way back to your place, have some “Eggplant caponatina with pistacchio cous cous” or “Tiny panelle sticks (made of chick-pea) with tomato chutney” at “Il Mirto e la Rosa”, in Via Principe Granatelli. Remember that pane e panelle (the round ones) are one the most well-known street food in Sicily along with Arancini.

On the day after get ready for the marvelous beach of Mondello and its turquoise sea. If you are lucky, even in November you can experience a wonderful swim and feel the real holiday atmosphere. Take a stroll along the seafront promenade to the end of the bay and admire some of the small colored fishing boats floating on the transparent water. Together with Monte Pellegrino in the background, the place is a natural idyll, the right scene for some nice photos: Goethe described Monte Pellegrino as the most beautiful promontory in 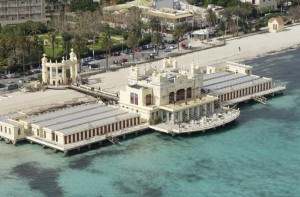 the world. I’m pretty sure you will then want to have lunch on the terrace of a stylish restaurant, its Art Nouveau “Alle Terrazze”, situated on a pier, in the center of the Bay.

Back in the city, try to walk along Via Roma, passing by Piazza San Domenico, and immerge yourself in the colorful Mercato Vucciria, the famous market that inspired one of the most famous Sicilian paintings, the Vucciria by the artist Renato Guttuso. Read a nice article written by one of our columnists, Maria Lina Bommarito – The Pulsing Heart of Palermo: The Historic Vucciria Market.

It might be time to rest in the hotel and get ready for the night life, or movida in Palermo. There are many trendy places to go, but the one area that represents Palermo more is in Piazza Rivoluzione. You’ll be surprised by the laughter of so many people chatting loudly outside the pubs where local bands perform as part of the vibrant musical scene here. Later on, from there you could stroll, following the stream of people into Via dei Chiavettieri or another area where you hear music and laughter. On the way back, the best thing is to get a taxi. It’s not easy to stop one, so it’s way better to call one in advance.

Sunday should be dedicated to art and culture. The sites named as Arab-Norman Palermo are on the tentative list for nomination to UNESCO World Heritage status (together with the cathedral churches of Cefalù and Monreale) http://whc.unesco.org/en/tentativelists/5565/

I would start from the Palazzo Reale or Palazzo dei Normanni, The Royal Palace, seat of the Kings of Sicily during the Norman domination (Palace of the Normans) now houses the Sicilian Regional Assembly, which represents the parliament of the autonomous Sicilian government. Also visit the elegant mosaics of the Capella Palatina and its unique mixture of styles: Norman architecture and decoration, Arab arches with roof ornamentation and finally the Byzantine style of the dome and mosaics. In Via Vittorio Emanuele, 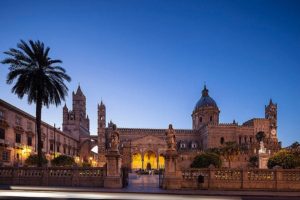 admire the Cathedral, an absolute architectural masterpiece. You can read about the Cathedral in many guides, but I would love to spare a few words for our beloved king, in fact the Cathedral is home to the remains of Emperor Henry VI and his son Frederick II.

Federico II of the House of Hohenstaufen, also known as the Swabian dynasty, was one of the most powerful Holy Roman Emperors and by far the most loved king in Sicily. “A man of extraordinary culture, energy, and ability – called by a contemporary chronicler stupor mundi (the wonder of the world), by Nietzsche the first European, and by many historians the first modern ruler..” (Detwiler, Donald S. (1999). Germany: A Short History. Southern Illinois University Press. p. 43). Frederick II also promoted literature through the Sicilian School of Poetry, which represented the first use in literary form of an Italo-Romance language, Sicilian, which also had a significant influence on the Italian language of Dante. It is worth reading the Times of Sicily posts by Nino Russo: The Poetic Sicilian School and Frederick II : The game changer in the Kingdom of Sicily.

Back to your journey, if you like contemporary art, Palazzo Risi is also in Via Vittorio Emanuele on the way to Quattro Canti. You will finally get to the Quattro Canti (4 corners), where 4 small fountains adorning 4 palaces represent the rivers that crossed the city once upon a time, the Papireto and Kemonia. Here you also have Piazza Pretoria, a must see in the historical center. Nearby are Palazzo Senatorio, the Church of Santa Caterina and the church of San Giuseppe dei Teatini but the real “protagonist” of Piazza Pretoria is the 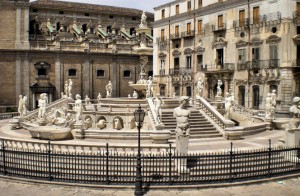 Fontana Pretoria, considered one of the most beautiful fountains in Italy, a scenographic masterpiece of High Renaissance Art in Palermo. It is known as the “fountain of shame”, because of the nude statues that stand around the base of each tier.

A few yards away, you’ll find the Chiesa Santa Maria dell’Ammiraglio-Martorana, and the Chiesa di San Cataldo, also part of the Arab-Norman UNESCO area. At this point I think you deserver a very nice lunch at the restaurant Osteria dei Vespri perhaps the very Sicilian dish, pasta mixed with sardines , pinenuts, anchovies, wild fennel, saffron and breadcrumbs and some Nero D’Avola wine or a sip of Cabernet Sauvignon of the Sicilian Tasca D’Almerita.

Now you are ready for the Galleria d’Arte Moderna, the modern art gallery in Via Sant’Anna. Just after this you must not miss the Chiesa of San Francesco and above all, the Oratorio of San Lorenzo. The Oratorio was built in 1569, and is an absolute masterpiece, created with a snow-white interior of stucco by 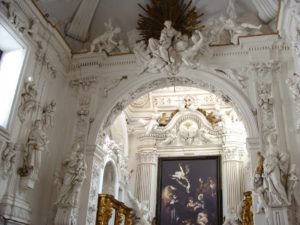 the famous Palermitan artist Giacomo Serpotta. Until 1969, the oratory was home to one of the most famous Caravaggio masterworks, “The Nativity with San Lorenzo and Francesco d’Assisi” one of the 4 canvas, the Maestro completed in Sicily before his death. The painting was stolen one night in October 1969, supposedly by the Mafia, and it’s considered the most valuable missing work of art in the world. As a result it’s listed in the top ten art crimes by the FBI: www.fbi.gov/about-us/investigate/vc_majorthefts/arttheft/caravaggio

Today in the Oratory a poor digital copy of the Nativity is on display!

In the area it is worth visiting the Palazzo Chiaramonte where among other things you can appreciate the “Vucciria” painting of Guttuso! The Palazzo Chiaramonte, also called the Steri was the Inquisition’ s base: “When referring to the Tribunal of the Holy Office in relation to Sicily, we firstly need to make a distinction between the Papal Inquisition and the Spanish Inquisition… you can still visit the dungeons daubed with the graffiti of the desperate inhabitants… the drawings and text are a poignant reminder of suffering”. Read the complete article by Andrew and Suzanne Edwards here.

In the nearby Palazzo Abatellis, you can admire the painting of the Virgin Annunciate, by that other famous Sicilian Antonello da Messina. 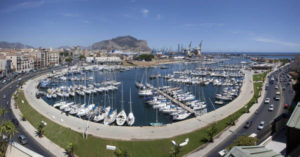 At this point I would take a walk to the Cala, hopefully enjoy some more sun and the boats in the modern marina and have some apertivo there! If you have time for something amusing and some space in your stomach, you can try the original Gagini Restaurant in Via Cassari, walking distance from the Cala. Here you can experience the “Tavolo Social”, a long table, placed among others, where guests can sit down and start talking / socializing with each other and exchanging experiences, hopefully you’ll be talking about how nice your journey in Palermo was and getting inspired to come back and see the rest of the city.