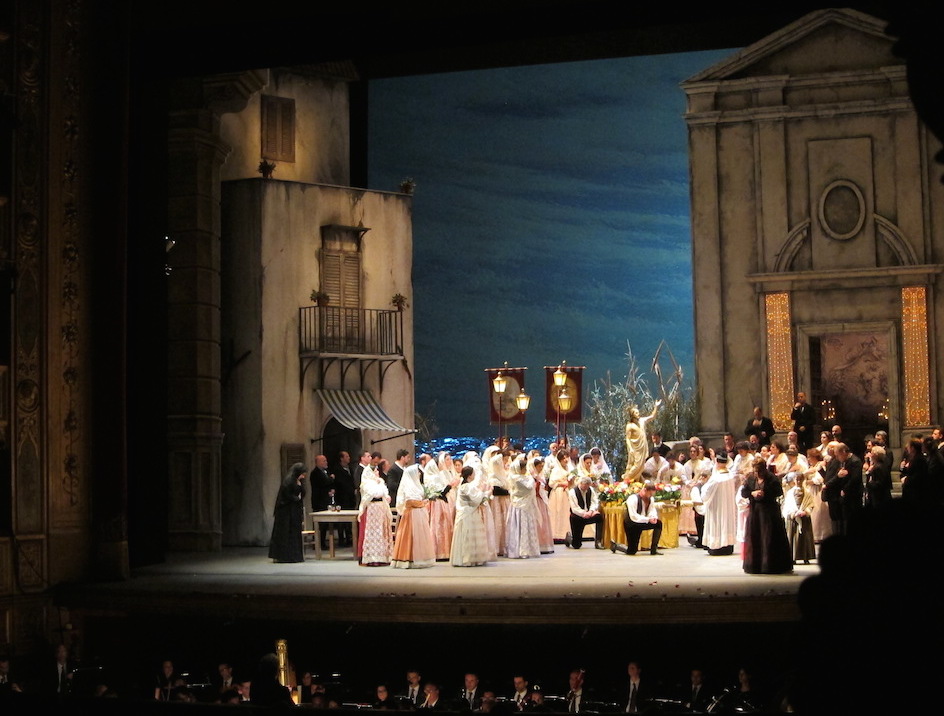 TVs were in black & white, 2 channels: RAI1 and RAI2. At times, they would show part of an the Opera on TV, La Traviata, La Tosca, il Barbiere di Siviglia to name a few, but what appeared more “homely” would be la Cavalleria Rusticana. I still remember Opera LP records featuring Maria Callas with their paper sleeves. The vinyl box set also contained the libretto booklet so that you could follow the story, if some of the family didn’t know the words or the plot.

Many years have gone by since I heard my grandfather or my father “humming” pieces of Opera whilst waiting for the evening so we could gather around the “small screen” and watch these unforgettable moments of entertainment for those times. The announcement on TV preceded a household announcement from the staircase to anyone interested. So off we would go, for a couple of hours of pure amusement and relaxation.

The tradition goes further back. A family story, which I’ve never understood if truth or a legend, goes like this: Great grandfather Annibale, living in the middle of Sicily, left the family home and went to La Scala in Milan to watch a premier of God-only-knows which Opera. It must have been the early 19th century. “Costi quel che costi, devo essere a Milano per vedere quell’opera” (Whatever it cost, I must be in Milano in order to see that Opera).

These days, partially living in Palermo, and never having actually visited the Teatro Massimo (no reason to envy to La Scala), I saw a playbill advertising “The Opera” and I couldn’t help myself! I said, costi quel che costi, I must see the Cavalleria Rusticana. So I “left” my family home (only a few 100 meters away to be honest), and sneaked out for a few hours to watch alone THE OPERA: La Cavalleria Rusticana, inspired by the story of the Sicilian verista (realist), Giovanni VERGA. A dream came true.

Ticket bought and off through the corridors of the magnificent theatre. I must admit I didn’t feel that comfortable but pretty proud! For a Sicilian, watching a Sicilian Opera in one of the most beautiful theatres in the world, that happens to be in Palermo, IS quite something.

I wish my father had accepted my invitation. It would have been nice, but he just said: “you need to be in the right mood and condition to watch this…”. He declined but also gave me a “heads up”, it’s a short Opera, normally coupled with another short one, most of the time “I Pagliacci”. Wow! He knows what he knows! That also sounds familiar to me. “I see” I replied! And I now remembered even more clearly the vinyl box at home containing both Operas. Unfortunately that evening the Opera was not coupled with “I Pagliacci” but with “Le Toreador” a French Opera in two acts, which I enjoyed very much, owing to the fact that I love French culture and I speak French too.

I must admit I was a bit more techno than my family members, armed with camera, smart-phone and Facebook ready to go. To the point that I felt embarrassed and actually ashamed, when a couple next to me in their 60s, who must have be foreigners, warned me about the strong light from my ‘tablet-phone” Samsung note 3. I felt my ancestors would have been spinning in their graves so I switched everything off (after I had taken a few pics for this article). 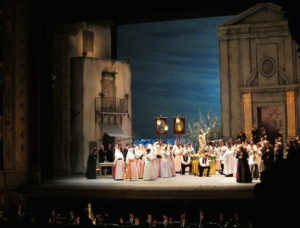 The story obviously focuses on that period, on a little Sicilian village. By the way, the scenography was amazing and made me step back in time to my father’s little town, Montedoro, near Caltanissetta. The young villager, Turiddu, returned from military service in his village, finds that Lola, his fiancée, whom he loves, has since married the carter Alfio. Ahh, these women!

In revenge, Turiddu gets engaged to Santuzza, but as we say, “first love never gets forgotten” and he becomes the lover of Lola, who in turn, is overcome by her jealousy of Santuzza. Offstage, Turiddu (in the Sicilian language) is heard singing The Siciliana – “O Lola, lovely as the spring’s bright blooms” (O Lola ch’hai di latti la cammisa, si Bianca e russa comu la cirasa…) -, Turiddu, accompanied only by the harp, sings this beautiful serenade for Lola; it is the first light of dawn.

The first goosebumps starts to cover my body. The atmosphere is a bit of a contrast, the deep joy of the mesmerising villagers, during a Sicilian Easter, which in Sicily has very strong traditions, set against the broken heart of Santuzza who finds out her fiancé was betraying her. Cheating discovered: Turiddu was not really out of the village buying wine (as he told her) but was seen, and heard, in the village. 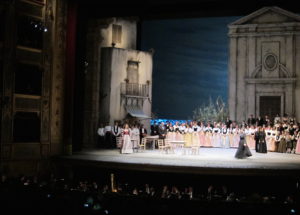 While the villagers were singing of the beautiful spring day (Gli aranci olezzano sui verdi margini – “The air is sweet with orange blossoms”) and a hymn to the Blessed Virgin Mary, Santuzza talks with Alfio and Lucia and reveals to them the betrayal.

It’s not for me to explain the complete opera in this article, which can be read on Wikipedia: the Opera goes on… and Alfio challenges Turiddu to a duel. What struck me, beyond the jealousy itself, the revenge, the great scenes etc was the resignation of Turiddu. The man perceives the duel as his “punishment” by the fates, as he already knows he’s going to die having betrayed Santuzza. To be noted is also his love for his “Mamma”: no matter how old you are, the Sicilian Mamma often reflects real love, especially when life turns out this way… He tells her that he’s going outside to get some air and asks that she be a kindly mother to Santuzza if he should not return: Un bacio, mamma! Un altro bacio!—Addio! – “One kiss, mother! One more kiss! – Farewell!”.

The Opera ends with the voices of the crowd, in the distance, and a woman cries… “They have murdered Turiddu!”. Santuzza faints and Lucia collapses in the arms of the women villagers. Too much emotion, that’s why the Opera is short?!?

Yes, being a Sicilian, brought up in a little village, it was a strong experience, which in a nutshell, perhaps can be expressed and condensed while listening to the Intermezzo (Interlude). While listening to these notes interpreted (in this videoclip) by il grande maestro Abbado or in the past by Maestro Hebert von Karajan – was as if, in a few minutes, I saw my entire youth, spent between Campofelice and Montedoro, my Papà’s town.

The prelude was requested twice by the crowd that evening, the clapping of hands was genuine and never-ending. The maestro thanked everyone, and wished that such music, such emotions could represent a new page for Palermo and all of Sicily!