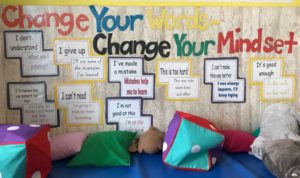 As an educator, I’d served as a blackboard cavalier for over three decades, teaching classes from first grade through senior year in high school. I also advised high school journalists. Retired from public schools, I lectured at the college level for a decade. At university, I trained nearly 500 apprentice teachers and fine tuned my evaluative skills. Recently, I enjoyed a Sicilian sojourn with my wife Adele, my youngest son Jon, his wife Adrienne, and two of my grandsons Petey 15, and Brock 12.

A colleague and friend invited me to visit the impressive International School of Palermo. On our drive to its famed campus we were lost and snared in a labyrinth of rough and rocky mountain roads. My costly navigation system experienced a mental breakdown. It directed us past the school. Speeding out of the city, we soon clattered over seasoned pavement stones. We’d plopped atop a narrow mountain road gaping down at Palermo.

To my left, numerous buildings embraced gentle hills, while slow motion sheep grazed. Color drained from my face and my hands became moist. After twisting and turning for miles on roads slightly wider than king-sized beds, I said, “We’re searching our Sicilian roots. We should be investigating Spanish origins. We’ve driven in circles so much, just call me Magellan.”

Fortunately, a courteous farmer walking beside a limping and bony dog looked inside my car’s window. He raised his ivory brows and asked in Sicilian dialect, “Are you lost?” He understood my Sicilian and pointed us in the correct direction. Despite his advice, minutes later, we managed to lose our way again. Spotting a pre-bearded motorcyclist roadside, I asked him for directions.

Ignoring the arrogant blare of horns blaring behind us, the motorcyclist patiently led us down the mountain toward the road to Palermo. I offered him twenty Euros for his help. He raised his right hand up resembling a police officer demanding a stop. Then, he politely declined my offer. ” A sign,” said my wife, “an angel sent to guide us.” I nodded in agreement.

After our return to Palermo, I clapped my hands excited to be immersed in the hustle and bustle of a boisterous city flaunting its pulse throughout traffic choked streets. I grabbed my phone and rang up a school supporter for directions. Unlike me, the brilliant computer maven I’d contacted magically managed to forward the appropriate route to the International School directly to my cell phone. 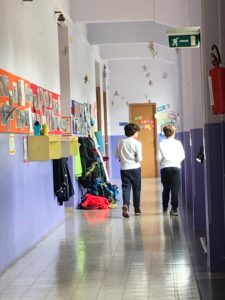 Eureka! Minutes later, I felt like I’d won a small lottery when the school’s wrought iron fence faced me. Stretching and lumbering out of my automobile, I met the gateman. He informed me that we’d arrived at the wrong gate. Despite my error, the gracious gentleman called a school official and confirmed our invitation. Then, he directed me to a parking space in his car park.

I have always been concerned about school security. In the open campuses of my youth, several students were involved in traffic accidents due to the ease in terms of leaving campus. I’d also witnessed unwelcome interlopers menacing school grounds. I recalled my last confrontation and my frenetic call for police assistance when an interloping and jilted boyfriend threatened to harm his former lady friend. A gated and secure campus similar to the International School’s model would have prevented that situation from occurring.

Walking toward a stately building, we were greeted by three vivacious, well-dressed women. Two students stood alongside an adult. Their spontaneous smiles and joie de vivre spilled out as they welcomed us. We shared a delightful moment. The welcoming committee consisted of Vicky Tarolla, PYP Coordinator, and students Fresia and Helena. Looking all around, the school seemed to swell with waves of enthusiasm. Our informative guides and energetic guides supplied bounce to my seasoned step. I heard one of my grandsons whispering, “Wow! These kids speak English as well as we do.” 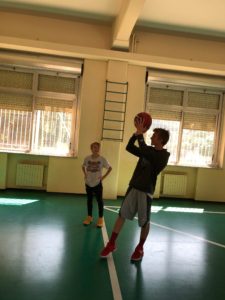 The well-kept International School Palermo appeared preened for another magnificent educational day. Coordinator Tarolla continued to guide us on a campus tour. As we walked, from classroom to classroom, I heard my grandsons, both high school basketball players, raving about the soccer fields, tennis court, and a basketball hoop on the grounds. We observed classes from pre-school thru high school levels. The lengthy stroll failed to affect my injured knee nor our visit. An elevator(lift) remained easily accessible and nearby. Obviously, the school accommodated the handicapped.

Throughout our visits to classes such as trigonometry, Italian, Spanish and literature we met passionate educators presenting imaginative lessons. Colorful and lively classes sporting state-of- the art bulletin boards abounded. Inquisitive students asked us perceptive questions about the USA, its schools, and sports. Surprisingly, in addition to Sicilian students, we noticed some from Switzerland, the United States, and other nations. International School Palermo proved impressively orderly, offered unique options that I’d love to have seen more of at home, such as small groups working independently.

After, Vicky opened the gym for my grandsons to play some basketball with their dad (my son Jon), a high school coach and physical education teacher. I chatted with my insightful, passionate, and knowledgeable coordinator in her busy office stocked with educational material. My mind rambled much like Montalbano’s Catarella and felt overwhelmed in the midst of a treasure chest overflowing with educational fervor. This experience brought me back to my educational roots. 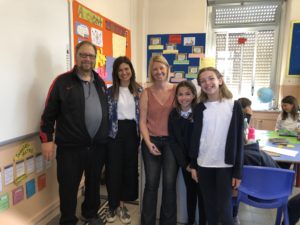 Vicky noted that that this school offered classes from preschool to tenth grade. An eleventh grade was planned for next year. Similar to American schools, students participated in clubs and competed against other schools in teams such as Mathletes. Unfortunately, they did not field sport teams yet.

As in many elite schools in the Unites States, applicants took entrance examinations. The difference, however, was that scoring poorly at this Palermo school did not automatically slam admission doors shut.  Those scoring below standards might request tutoring in the hopes of passing admission requirements in the future.

English was spoken fluently in every class I’d visited. The school provided a comprehensive curriculum. When needed, students accessed numerous personal tutors in their classrooms.  Many forms of extra help existed. Unlike many schools I observed in the past, students and teachers were not overwhelmed by stockpiles of required standardized tests. Teachers tested regularly. These instructors, however, initiated the examinations.

On our voyage home, while at the airport, I stretched and napped as I awaited my flight home. Suddenly, the rumble of rolling luggage all around awakened me. It sounded like a freight train thundering through the airport. With raised brows, I witnessed lines of sweat-stained passengers looking like frenetic sailors heading for their first shore leave. Despite this web of confusion surrounding me, I overheard my grandsons chatting behind me. Petey said, “Our two student guides really got along well. Interesting, one was Italian and the other German.” Later, I informed those boys that the school’s enrollment consisted of children from diverse homelands such as Italy, Germany, the United Kingdom, the United States, Australia and Bangladesh. Brock added, “They seemed so happy to be in school, friendly toward each other too. I mean that! I saw groups of happy kids working outside classrooms, probably sharing research.”

I realized that my grandsons’ observations reflected so many of the behaviors that I felt essential to quality education. The school’s diversity, enthusiastic teacher, and students were obvious. I valued these as the key factors of quality education. I’d stressed them in my years as a university Coordinator of Student Teachers.

Thousands of feet above the Atlantic, peering through cottony clouds, I reflected upon my experience at the school. Few things are more exciting for an educator than witnessing the marriage of learning and wonder captivate a child’s mind. That wonder oozed throughout Palermo’s classrooms. Thankfully, the words of William Butler Yeats distracted me during my bouncy ride home. He’d said, “Education is not filling a pail, but lighting a fire.”

I discovered a photograph in my phone. During the tour, I captured a pledge attached to a chalkboard. 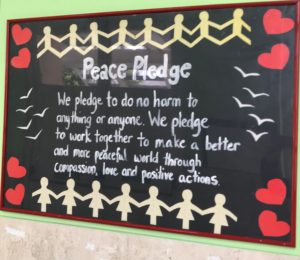 ” We pledge to do no harm to anything or anyone.  We pledge to work together to make a better and more peaceful world through compassion, love, and positive action.”

International School Palermo  certainly achieved these educational, lofty, and humane goals. I am thrilled to have witnessed outstanding educational outcomes there. Its educators certainly triggered the Yates-like fires of intellectual curiosity in the student body. My family and I felt blessed to have experienced a day in this exemplary school.