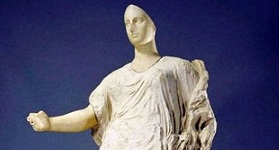 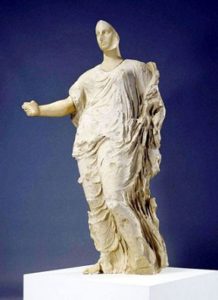 This famous Greek statue “the Venus of Morgantina” standing 2.2 mt tall, from the eponymous archaeological site in Sicily (sculpted between 425 and 400 BC) – returned to Sicily on March 18th 2011 after a long and forced exile in the United States.

The Statue was assigned to Morgantina Kamarina, after the agreement of Gela (424 BC) brought about by Hermocrates of Syracuse. The diplomatic meeting, focussing on: “Sicily for the Sicilian”, took place between a number of Sicilian cities calling for a temporary halt to several years of warfare. The creator of the statue was a direct disciple of Phidias, and as there was a thriving local cult of Demeter and Kore at Morgantina, and so she is most probably Demeter or Persephone (Kore).

According to the allegations of Enna magistrates, the precious statue was stolen from Morgantina in the second half of the twentieth century, and later sold to the Paul Getty Museum at an auction held in London. The Venus was originally sold in the early eighties for $ 400,000 to a London company, Robing Ltd Symes, who would later sell it to Paul Getty Museum, in 1986, for 10 million dollars. On 5th March 2001, the Court of Enna sentenced the Italian “fence” of the Venus, octogenarian Ticino, Renzo Canavesi, to 2 years’ imprisonment without the benefit of the law and to pay a penalty of 40 billion lire. This was the first case in Italy, where a court applied such a penalty for the illegal export of works of Italian art.

In 2006, Jason Felch and Ralph Frammolino, two journalists from the Los Angeles Times became finalists for the Pulitzer Prize in Investigative Reporting for exposing the role of the J. Paul Getty Museum and other American museums in the black market for looted antiquities. Their book is called -CHASING APHRODITE, The Hunt for Looted Antiquities at the World’s Richest Museum – After years of detective work, the two authors presented their first book about the case, bringing together all elements of the story, with unpublished pages of that particular criminal network and its illicit purchases. Felch and Frammolino’s book was a major contributor to the suit of criminal actions that led to the reacquisition of the illegitimate Venus.

From the Summary of the book:

“In recent years, several of America’s leading art museums have voluntarily given up their finest pieces of classical art to the governments of Italy and Greece. The monetary value is estimated at over half a billion dollars. Why would they be moved to such unheard-of generosity? The answer lies at the Getty, one of the world’s richest and most troubled museums, and scandalous revelations that it had been buying looted antiquities for decades. Drawing on a trove of confidential museum records and frank interviews, Felch and Frammolino give us a fly-on-the-wall account of the inner workings of a world-class museum and tell the story of the Getty’s dealings in the illegal antiquities trade. …” 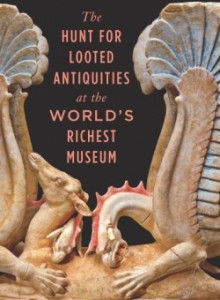