A Chat with Alejandro Luque about Sicilian Literature 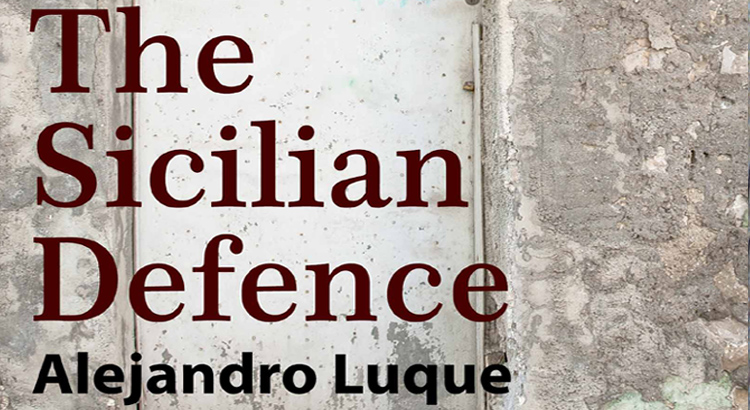 If you have clicked through the pages of this website before, you have probably come across the previous contributions from Alejandro Luque, the Spanish journalist and autor who has more than a passing penchant for the culture and literature of Sicily.  To celebrate his book, The Sicilian Defence, being released in English translation, we had a chat about his inspiration and love of the island.

It’s obvious that you have a real fondness for Sicily.  Where did you get the inspiration to write The Sicilian Defence?

It came from an obsession.  I made two trips to the island in very quick succession, and I was left absolutely fascinated, not only by its marvellous nooks and crannies, but also by the power of its literature. That such a small place has given us two Nobel Prize winners, in addition to some of the best exponents of Italian and European letters, makes it a very propitious space for inspiration.  I was then determined to read everything, to know everything possible about the place, including its food, its music, its history…  And before I knew it, everything I wrote had something to do with Sicily; even when I tried to speak about myself, or my surroundings.

In the book, there are occasions when you make reference to the masters of Sicilian literature, specifically with the character of Don Vitaliano or the name of the witch, Malavoglia. There are also echoes of Pirandello. What does the island’s literature mean to you?

An inexhaustible school. I think Pirandello was the one who best captured the spirit of Sicily, so charged with contradictions, and he was a direct influence for people who came after, like Leonardo Sciascia, another author you reread time and time again, and you always learn something new.  Gesualdo Bufalino is perhaps, along with Vincenzo Consolo, the great stylist of Sicilian literature, without abandoning his incorruptible ethical attitude in the slightest.  Even, in my opinion, some of the slightly lesser names, like Vittorini, Brancati or Verga, are very interesting from a literary and anthropological viewpoint.  If that weren’t enough, we have Lampedusa, who is an undeniably outstanding figure, and Camilleri, a very popular author but with an extraordinary intelligence… That’s only to quote the most well-known.  Now that I think about it, more than a school, the island’s literature is a fiesta, an unending feast.

Are there any actual locations that appear in your stories?

In the majority of cases they are hinted at, but in A and R, for example, it’s obvious that Palermo makes an appearance. And then there are references to Agrigento, to Etna…  But I don’t want to make things too dependent on the geography of the stories.  On the contrary, what I intended was that the reader would project on to them his or her own idea of Sicily.  In other words, to work on the island as a literary and metaphysical land.  This runs the risk of exposing ourselves to the most harmful topics, but in exchange it opens an enormous field of liberty and fantasy.

Which is your favourite story of the eight in the compilation?

That’s such a difficult question to answer, like making a father say which is the favourite of his children…  I think the most rounded is Memories of Enzo G, I have always imagined it as a short film – and am always dreaming of a version bettered by the director.  The one that gives the book its title, perhaps more imperfect, I like for its ambition and for its depth charge directed towards the cultural environment in which we move. On a personal note, stories like A and R or A Spin of the Bottle touch me closely, but the reader doesn’t have to know why in order to understand certain key points…  All in all, I think that I’m the least suitable to talk about these children!

Authors such as Bufalino and Sciascia expressed themselves by means of the short story, what advantages or disadvantages does this medium have?

Well, first of all I must say that the strength of the genre in Sicily is impressive.  In Spain we are still fighting to defend the dignity of the short story against the all-powerful novel, inspite of having had Borges, Rulfo and Cortázar in our language.  In Sicily, however, all the greats cultivated the short story, and they did it not just as a simple exercise in readiness for tackling the longer distances.  In addition to those you have mentioned, think about Lampedusa, known for The Leopard, but the author of an absolute master work of the short story, Lighea.  Or the very same Pirandello, famous for his Six Characters in Search of an Author, but who was capable of confronting a colossal challenge like Novelle per un anno.  Such a book deals with a land very influenced by legends and fireside stories, which by necessity are short.  That said, the disadvantages of the genre are really only to do with the prejudices that surround it.  And perhaps also with its high technical requirements.  I’m not referring to the supposed obligation for everything to be pure fiber and about nothing: I like stories with a “little meat on the bones”, those which, as Gracián roughly said, don’t fall into the “cant of brevity”.  The requirements of the short story come from that mix of intensity and containment whose right proportions are perhaps only within reach of the truly great.

You have written another book about the island; can you describe it for us?

It’s a bit daring. The notebook of a journey, real up to 99%, in which I travel around the island following a series of portraits of Borges taken by the Sicilian photographer Ferdinando Scianna, from the Magnum Agency.  With the pretext of finding each one of the exact locations where Borges sat his illustrious bottom, I describe the island with a certain uninhibited ease, as I didn’t want to write a book full of erudition or anything like that.  Definitely today, after numerous further trips, I would have written something different.  However, I still like – without completely shelving my sense of self-criticism – the mix of naivety and passion given off by the text.

As a journalist with El Correo and M’Sur, you have a great opportunity to interview figures from the Sicilian and Italian artistic and literary worlds, for example, Consolo, Tedesco, Scianna, Agnello Hornby, Manfredi.  Can you tell us some anecdotes from these interviews?

Scianna is a professional worthy of admiration and I caught up with him during his visit to Madrid.  I think he found it funny that some madman would have travelled around the island using his photographs as a guide, and from that arose the connection that made him generously give me his images for the Spanish edition of Journey to Sicily with a Blind Guide.  Then the editor mistreated the material and I think he was a bit disappointed, which upset me.  But it hasn’t stopped us wishing each other a happy birthday (me on the 3rd of July and him on the 4th) and at Christmas: he always sends a wonderful message.  Simonetta Agnello is a very nice lady who, after a long interview, told me with the microphones off, about her failed engagement to a Spaniard…  I interviewed Consolo in Seville, certain of being in front of a maestro of the Italian language.  I remember that Natale Tedesco, a great professor, was a bit jealous with my interest in the author of The Smile of the Unknown Mariner, and he asked again, “and me, aren’t you interested in interviewing me?”.  Regarding my Italian interviews, I particularly remember with affection the one I did with Tonino Guerra, the poet and a wonderful screenwriter, in his house in Pennabilli, a few months before he died.  He was chiefly worried about where I was going to eat and sleep, and he didn’t agree to the interview until he was sure I had eaten.  And a short while ago I visited a very intriguing writer at home in Erto, Mauro Corona.  I have more than five hours on tape, although I haven’t had the opportunity to transcribe it… Soon on M’Sur!

How often do you get the opportunity to visit Sicily?

I try to do it once a year, but I also realise that each trip leaves me suffering from after effects.  If I’m allowed a comparison, for me visting the island is akin to taking part in an orgy: you leave with a surfeit of pleasures, but also at times exhausted, and even with your heart at risk… Having just reached 40, I have learnt that obsessive loves are rather pernicious, so I have imposed a gentler regime of visits, where I even allow myself some discreet infidelities with the North of Italy.  But Sicily and I know that they are nothing more than distracting manoeuvres: although she’s far off, although I’m not writing about her, my heart belongs there.

The Sicilian Defence on UK Amazon

The Sicilian Defence on US Amazon

For those who would like to take a look at the original: La defensa siciliana