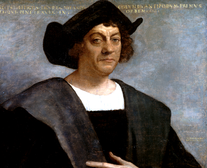 Columbus Day hardly gets much notice lately. There are furniture store sales, some government offices and banks are closed, a parade in New York City that is no longer nationally televised, and he’s no longer held up like a hero to school children. 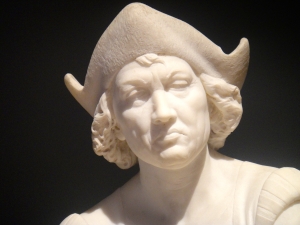 I feel sorriest for kids everywhere who, it seems, are only entitled to heroes out of Marvel comic books and not from real life. It’s fashionable to hunt down every mistake our forefathers made, to talk of their wrongs against society, to hold them accountable for the barbaric practices that were commonplace in their time period.

To tear them down until there is no shred of heroism left.

Granted, Columbus was far from perfect. Just like the other great men of history who entered the slave trade, unwittingly spread disease, conquered lands that were not their own, and took treasure they were not entitled to, so, too, did he. Some say he might not be the first European to find America. But whether you believe that or not, he was the first to colonize and make these lands known to all of Europe. In essence, he was the first non-native American.

I think of the dangerous voyage my own grandparents made to come to this country. They didn’t speak English, didn’t have a place to stay, no job waiting, yet they crossed an ocean in a ship much like he did, taking a chance that there was someplace better in this world for them to be. Like the settlers that came after him, Columbus crossed the mighty Atlantic in a fleet of three surprisingly small wooden ships, losing one on the way. That took daring, and intelligence, and perseverance that is rare today.

How many people could do that?

I personally have trouble going out of state without GPS, how did this man do this with only the stars to guide him? No maps, no computer, no one who gave him oral directions. Out alone on a rough sea. hoping to see land, commanding a crew who believed they might fall off the edge of the world and might mutiny any moment. He did this a total of four times in the late 1400’s a remarkable 522 years ago. It was equivalent of being the first man on the moon. 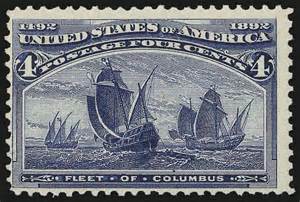 Columbus means a lot to me as an American of Italian descent. My culture is riddled with forced stereotypes: Mafia bosses, New Jersey Housewives, loud arrogant members of the Jersey Shore. We’re thought of as pizza chefs and mobsters. Less widely remembered are the incredible contributions people of Italian descent have made — with our hands building the infrastructure of the U.S. — tunnels, roads, and bridges — with our genius sculpting and painting the decorative parts of buildings in every major American city, and with our minds as scientists and leaders.

The magnificence of the Capitol dome, scientific inventions like the telephone (only in the U.S. do people not know the true inventor of the telephone is Meucci) are ours. We are doctors, lawyers, and teachers. We carry the culture and refinement of the Romans, Tuscans, and Sicilians in our blood. Places non-Italians love to travel and somehow snobbishly distinguish from the Italians who live in the U.S. We are Supreme Court justices and the guy who carries your mail.

We deserve a hero.

Perhaps that is why I am a thriller writer and love the suspense and romantic suspense genres so much. These stories are at their core about heroes, some unlikely, some highly trained, all imperfect individuals who must summon an extreme level of heroism and courage few, like Columbus, possess.

Seven percent of the U.S. identifies itself as being of Italian descent. There are probably more, but so many of us have been taught to be ashamed and try to hide the fact of our ancestry. Among us there is no unified voice that asks for a month devoted to our history. We deserve that, too.

This month is Hispanic History Month. I have been aghast at how little I know of Hispanic history — of which Columbus is a key figure.  It is right and apt that this Italian American’s birthdate falls in the midst of this particular month. Without the support of Spain, Columbus would not have discovered the Carribean and Latin America. He would not have been Governor of Hispaniola. He is as much a hero for those of Spanish descent as he is for those of Italian.

But let’s not squabble. To me, he is a hero for us all.

Diana Belchasehttp://topsecretwashington.com
The granddaughter of two Italian knights, Diana Belchase grew up dreaming of castles, damsels in distress, and the gallant princes who rescued them -- except sometimes it was the damsels who did the rescuing. :-) She is a multi-award winning author who splits her time between Washington, D.C. and Sicily. Diana writes spy novels, short stories, and mainstream fiction, as well as nonfiction and speeches. She often uses her beloved Sicily as a backdrop for her stories. In her spare time, Diana writes about her life in Washington, D.C. on TopSecretWashington.com and interviews authors and artists on her TV show, Book Smart, which can also be seen on her YouTube Channel. Her first book, The Spy in the Mirror, a Golden Heart winner and Daphne du Maurier finalist, is expected to debut next year.