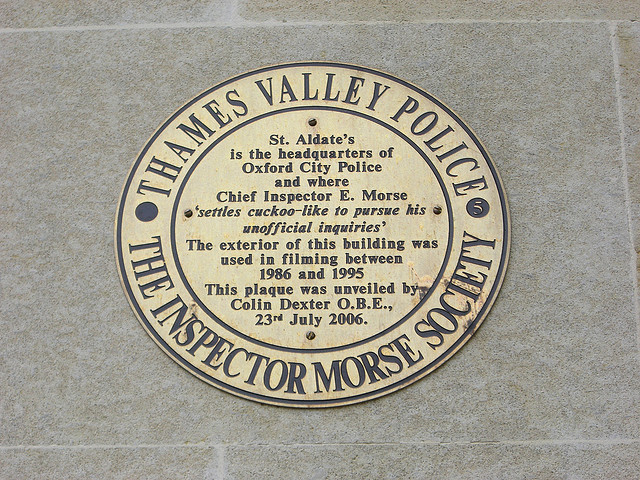 It seems that every nation has its favourite fictional copper and, if they’re successful enough, they stretch beyond the borders of their own country: Denmark has Sarah Lund, Sweden has Kurt Wallander, Spain has Pepe Carvalho and France has Laure Berthaud. Some are literary, some are televisual and some are both – the best being born of literature and transferred to screen. Two supreme examples come from the writings of Colin Dexter and Andrea Camilleri, namely Inspector Morse and Commissario Montalbano.

How do the two shape up in a head-to-head investigation? Although the actor who played Inspector Morse, John Thaw, is sadly no longer alive, the series is constantly re-run around the world. Both Dexter and Camilleri were closely involved in the screen adaptations, with Morse’s author even having a Hitchcockian cameo in each episode.

Are these two policemen the distilled essences of the best of national characteristics or are they stereotypes? Let’s look at the evidence. Firstly, these middle-aged men embody the independent copper, ploughing a lone investigative furrow in the face of intransigent beaurocracy. Morse’s boss, Chief Superintendent Strange, has a favourite phrase, “You’re off the case”, which echoes around his spacious office when he can no longer deal with the Inspector’s maverick attitudes. He shares with Camilleri’s Bonetti Alderighi, a concern for governmental dictats and the damning verdicts of the press. From the tabloid madness of the English newspapers to the localised reporting of Sicilian regional television, each is indicative of its own environment.

Morse’s milieu is the dreaming spires of honey-coloured Oxford University colleges and the drab monotony of the city’s housing estates. Montalbano oversees the Mediterranean heartland of southern Sicily. The fictional Vigata is identified with the author’s hometown of Porto Empedocle, and via the television, with Ragusa Ibla and the Baroque valleys of south eastern Sicily. Part of the appeal of these programmes has been the spectacular settings. Many would think that the Sicilian cases would centre solely on organised crime but Camilleri likes to focus on individual dramas born of personal conflict. Morse, you could argue, is rather more narrowly focused – how many academic Dons can be murdered in the pursuit of the university fellowship? As the comedian, Bill Bailey so astutely joked, Morse’s cases seem to revolve around murders ‘with sharpened pitta bread’ – an allusion to the middle class nature of much English crime fiction.

To fire their deductive brain cells, Montalbano likes to eat the best of Sicilian rustic cuisine and take a contemplative stroll along the quay to his favourite rock. Alternatively, he sits under a Saracen olive tree, deep in thought; whereas Morse takes pride in solving a cryptic crossword whilst indulging in that most English of pastimes, drinking real ale in a country pub. Both of these inspectors are not without help, least of all from their respective right-hand men. Lewis and Fazio are of the same ilk – honest and very thorough with an unspoken bond to their bosses. Although Fazio’s record office complex, his passion for detail, drives Montalbano to distraction. Similarly, Morse’s impatience is shown through his intolerance of Lewis’ lack of cultural awareness and his propensity to do things by the book.

The books and television series have the inspectors immersed in cultural pastimes. Morse is a former Oxford scholar whose love of the Classics and the music of Wagner pervades each episode. Camilleri’s novels are full of allusions to the greats of Sicilian and world literature from Leonardo Sciascia and Ludovico Ariosto to Maigret and Shakespeare. The inspectors are made all the more endearing through being essentially flawed. Morse is a cantankerous batchelor who does not suffer fools gladly but is constantly on the look out for love. He always falls for the wrong woman – usually the chief suspect in the case! – but his romantic nature softens the hard edges. Montalbano also lives alone but has a long-distance and fiery relationship with his girlfriend, Livia. He is not the southern lothario we would imagine, but constantly fights against the temptation provided by the stereotypical femme fatale, occasionally losing.

One of the charms to be found in watching Camilleri’s detective is the gentle comedy provided by the romantic interludes and his interaction with the infuriating yet loveable desk sergeant, Catarella. Almost certainy a nepotistic appointment, Caterella would not have been tolerated by Inspector Morse who frequently takes his frustations out on the local bobby, which English tradition characterises as Police Constable Plod – the leaden-footed, slow-witted local policeman. Caterella constanly mangles the Italian language and is famous for his mis-pronunciation of names, with comical results. The buffoon turns out to have a great talent for computer technology, something which both Montalbano and Morse despise. The slapstick character has his metaphorical revenge.

If Montalbano largely stays faithful to his girlfriend, his side-kick, Mimi Augello, more than makes up for his boss’ lack of Don Juan tendencies. Inspector Morse has no equivalent character, as Detective Sergeant Lewis is a happily married family man. Other characters on the periphery, but no less important, are the much abused pathologists. Wanting to know the details immediately, the detectives are short-tempered with their respective forensic departments. Doctor Pasquano and Montalbano play a game of insults and drip-fed information, but with, we suspect, an underlying respect. Morse is shocked to find his new pathologist is a woman and unintentionally insults her by considering that such a task be too delicate for feminine sensibilities.

As Montalbano sips a whisky on his balcony and Morse downs a pint in the local country pub, have they fulfilled their stereotypical role or are they more than that? It is undeniably true that aspects of their characters are cliched but equally that they represent a microcosm of their societies. This lens on both worlds has led many beyond their own borders to enquire further, which is a rare feat for much mainstream fiction.