Conversation in Seville: Vincenzo Consolo talks about his work 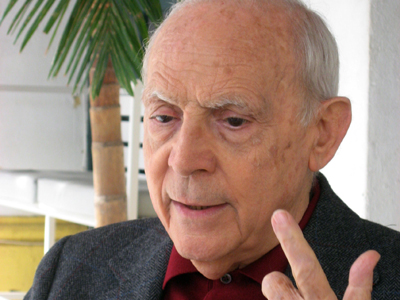 And just when you thought you were up to speed with the latest releases, when you believed you had read all the books (and, indeed, had perhaps discovered that the flesh is sad), all of a sudden this rarity falls into your hands, this delightful anomaly from the publishing industry. It’s so rare that, as I write these lines and you read them, we might not even know where to go to buy a copy, given it currently lacks a distributor. A worthy volume in itself, simply as an object, with the format that characterises the little gems from the publisher, La Carbonería: the generous paper, the friendly type and the portrait of the author taken by Tony Soto on the cover.

Yet, what’s more, we’re talking about Consolo. In other words, we’re looking at a very special book, almost clandestine, from an author who’s almost unobtainable in Italy today, let alone Spain (translator’s note: or for that matter, the UK or US). Having said that, his first novel, La ferita dell’aprile, was recently rescued in Spain. Nevertheless the fact that his other titles linger in the shadows of the discount bookstores, or not even there, reminds us how mad and how lost the values system continues to be in the little world of publishing. 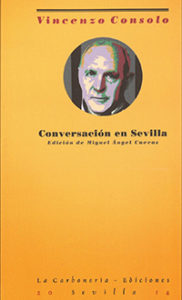 What is it, what’s it all about – you might ask – this Conversación en Sevilla? Well, as its title suggests, it’s a long chat (in reality, more than one) with Vincenzo Consolo (Sant’Agata di Militello, 1933 – Milan, 2012), conducted, recorded and transcribed by his chief defender in Spain, Professor Miguel Ángel Cuevas. The Sicilian writer visited the capital of Andalucía several times, even being the object of a conference at the University on the occasion of his 70th birthday (although, delayed for a year due to budget constraints, it had to be titled 70 + 1). The thing being, whether unconsciously or knowingly, in these encounters Consolo gifted us the keys to his work.

This makes Conversación en Sevilla, with its nod towards the Conversations in Sicily of Vittorini, an exceptional guide that brings one close not only to his books, but also to his moral position and his thought, assuming the two are distinct. However, I think you can read it without the necessary bibliographic references, with the naturalness of someone who arrives at a table of friends and starts to listen, because the person speaking is lucid, interesting, with a very refined sense of erudition.

Consolo starts off by remembering the Greek world on his native island, and the impact that he felt on coming to the conclusion that it only remained as a set design, the ruins of Arcadia. He makes a defence of memory as essential for literature, reformulating the Pasolinian idea of progress and development, then jumps to reflect on the silence of the writer with regard to his/her inalienable freedom.

Something else for the initiated, ma non troppo, are his ideas about the Italian language, which are fundamental in understanding that Consolo’s work goes further than the content, that its richness is also found in a certain linguistic archeology, in the search for a poetic rhythm, for a music, things which can pass unperceived by the distracted reader – or can be lost in translation – but which, without doubt, are very entertaining to whoever dares to look below the surface.

Within these pages we find an erudite Consolo capable of quoting Homer in Greek, but also a man somewhat troubled: “They take me for a writer, an intellectual, a pessimist: I don’t believe myself to be such a person, I think I’m a realist…”. The author comments on his work book by book, with the exception of his last, Lo spasimo di Palermo, – what a shame – and his rich book of essays, Di qua dal faro, essential for anyone who wants to get past the postcard image of Sicily.

When dealing with my favourite novel of his, Nottetempo, casa per casa, the story of the arrival of the occultist, Aleister Crowley, in Cefalù (yes, metalheads, the very same who had the song, Mr Crowley, dedicated to him by Ozzy Osbourne), Consolo focuses on a detail that passed me by back in the day. It’s an episode that simply seemed a very capable piece of descriptive prose, but whose explanation shook me: “In the work there is a description of the construction of a large earthenware jar, the fruit of science and culture, of a peasant culture; the fascist doesn’t know what it means to construct such a jar, he only knows how to destroy it and spill its oil, the fruit of the olive, the tree of the goddess of reason, Athena”.

Finally, we have the brief portraits of his friends, Leonardo Sciascia and Lucio Piccolo, the cousin poet of Lampedusa. I remember the three together in a photo by Ferdinando Scianna: three men from another time, almost another galaxy, without doubt unrepeatable.

The main anecdote centres on the following: Consolo grew tired of passing greetings from one to the other without them getting to know each other personally – so he finally managed to put together a meeting. Piccolo then said, “Sciascia, I invite you to talk about those villages of yours, so full of such fascinating medieval history”, to which Sciascia responded: “That’s down to Consolo”. Piccolo replied, saying that he was still a lad. The boy grew up to write Lunaria, Retablo, Il sorriso dell’ignoto marinaio (translator’s note – his one novel translated into English as The Smile of the Unknown Mariner)…

The cherry on top of this volume is a story hitherto unpublished in Spanish (or English) with the irresistible title: ‘The Grand Oriental-Occidental Holiday’. Perhaps all of Consolo is found there, perhaps the soul of Sicily, like someone lifting the whole island, to borrow a phrase from Virgilio Piñera.

A final recommendation: lazy readers abstain. Vincenzo Consolo isn’t an obscure writer for the sake of it. He isn’t, as somebody once said, one of those who gift his literature leaving the price exposed in order to display how expensive it is. Yet neither is he a simple entertainment. Banality has no place in his pages, nor frivolity, but intelligence, wordplay, heart and hope do. Give this book as a present to someone you love, if you can manage to find it. Treat yourself too, and flee to some solitary beach to read it under some Homeric sun. Surely you deserve it.

Final translator’s note: I heartily encourage readers to give this title a go – even if you have rusty Spanish or have to read with the aid of a dictionary. It really is worth the effort. The book is being presented at Seville University on 29th April, after which it will hopefully gain a wider distribution. Alternatively, get a copy of any Consolo in Italian or, failing that, track down The Smile of the Unknown Mariner. (Andy Edwards)

The reviewer, Alejandro Luque, is the author of a compilation of short stories set in Sicily, The Sicilian Defence. Diane Donovan in The Midwest Book Review called it ‘a magnificently crafted series of vignettes exposing the underbelly of choice and its consequences’. Click here to view on Amazon.