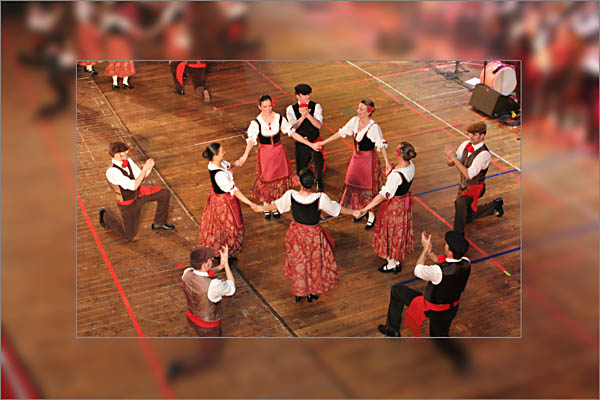 The ballroom scene in Luchino Visconti’s 1963 film version of Giuseppe Tomasi di Lampedusa’s novel Il Gattopardo (The Leopard) is a very grand piece of cinema. It is extravagantly costumed in yards and yards of silk and satin and velvet with a sparkling splash of jewels. Nino Rota’s waltzes whirl around the ballroom showing off spectacular ball gowns. The pillars of Sicily’s aristocracy are caught up in dancing that tells us about their social customs and manners and about the conventions that control the relationships of men and women. It is very much a dance of courtship and a dance that represents the end of an era for the aristocracy.

Folk dance, unlike waltzes in ballrooms, reflects the lives and inherited traditions of Sicilians who are not of the land-owning class. They harvest crops and produce olive oil and bread and shoes—they are Sicily’s workers. The most well-known Sicilian folk dance is the tarantella, which can be either a courtship tarantella that is stately and elegant or the so-called curative tarantella. Some historians believe the tarantella originated in Greece.

The Sicilian curative tarantella, however, comes from Taranto in Puglia. The bite of the tarantula, a poisonous wolf spider, can cause a person to fall into a trance. This person is usually a woman, who is called a tarantata. The trance can be cured only by dancing the frenzied tarantella for several hours or several days during which the victim becomes increasingly delirious and contorted in order to sweat out the poisons of the spider bite.

The courtship tarantella, which is danced by a group of male and female partners, is teasing and flirtatious. It is accompanied by tambourines decorated with many colored ribbons and is very often danced at Sicilian weddings.

The Akragas Folk Dance Group of Agrigento was founded by Gaetano Agozzino and Nino Lauretta. Their goal is to present and keep alive Sicilian folk traditions.  Nino Lauretta is manager and art director of the company, and Fabio Gueli and Enzo Lauretta are the dancing trainers. Peppe Sciortino is the solo singer for the company. The Akragas troupe has been successful in presenting Sicilian folk dance and folk song to the world with participation in folk festivals all over the world.

Sicily’s economy has always been a mostly agrarian economy. To honor Sicilians who work the land the Akragas Folk Dance Group performs the Canto del Mietitori, the Song of the Harvest. It is a large song and dance work that alternates between singing and dancing. Some of the hand and arm gestures of the dancers mimic the movements of workers bending in the fields. It is a colorful celebration of the island’s bounty and the Sicilians who harvest that bounty, complete with flashing tambourines, the music of the wooden flute—called the friscalettu in Sicilian—and the soaring songs of Peppe Sciortino.

On the west coast at Mazara del Vallo there is a young bronze satyr caught in an ecstatic jump, his head thrown back and his tangled, flowing hair leading the way. He is missing both arms, one leg and his tail. This Dancing Satyr, now in the Museo della Satira Danzante in Mazara del Vallo, was rescued from 1,600 feet (500 meters) of sea water on March 4, 1998 by Captain Francesco Adranga and his crew at their fishing grounds. One of their nets reached the surface with a 6-foot, 6-inch (200 centimeter) Dancing Satyr. Several months earlier the same captain and crew had netted a bronze leg that miraculously was the leg of the Dancing Satyr.

The Satyr’s leg and his torso and head were taken to the Istituto Centrale per il Restauro in Rome for restoration. After five years of cleaning scientists uncovered much of his beauty and used chemical treatments of the bronze to prevent damage from exposure to the air. Finally he was exhibited at the Palazzo Montecitorio in Rome. A metal support was designed so that he could be displayed upright. It was time for this Dancing Satyr to go on tour. Off he went to the National Museum in Tokyo, the Louvre in Paris and the Royal Academy of Arts in London. His piercing white alabaster eyes, filled with a crazy kind of passion, and his beautiful energetic torso earned him lots of applause wherever he went. (Only the Charioteer of Mozia has a larger fan club.) When he returned to Mazara del Vallo the museum built a base for the statue that would protect it against earthquake tremors.

Sicilians dance. It’s part of their character. It’s something they do very well. Something they picked up from the Greeks and maybe the Spanish. They are still dancing. Sicily has trained some of Europe’s most stellar dancers.

Prima ballerina Eleonora Abbagnato was born in Palermo and as a child studied with Marisa Benassai. At age 13 she toured Europe as the young Aurore in Roland Petit’s The Sleeping Beauty. Later she went to Paris where she studied with Claude Golovine-Bessy and in 1996 joined the Corps de Ballet at the Paris Opera. By 2001 she had become a prima ballerina with the company. Later she became a teacher for the Paris Opera ballet but in 2015 was named director of the Corps de Ballet at the Teatro dell’Opera di Roma.

In addition to working on stage, Eleonora Abbagnato appeared in a television production of George Balanchine’s Jewels. Her performances are lyrical and make it clear that she is indeed a prima ballerina. She is also a very fine actress who clearly understands the roles she is dancing.

Nunzio Impellizzeri, a shining star in the constellation of modern dance choreographers, was born in 1980 in Acireale.

He studied visual arts at the Istituto Statale D’Arte in Giarre-Riposto and fashion and costume design at Studio Ferrera in Catania. From his work in painting and drawing and costume design he developed an attraction to the energies and lines and shapes of dance and began to study classical ballet and modern dance at MoDem in Catania. The MoDem (movimento demcratico) concept was developed by Sicilian choreographer Roberto Zappala and is designed to promote the company’s dance language.

Impellizzeri began dancing with the Campagnia Zappala Danza, Roberto Zappala’s Catania company. He moved quickly into choreography. One of his earliest pieces was Le mille una notte for the Gruppo Iarba company in Catania in 2003. The dance world was quick to see Impellizzeri’s talents. Soon he was choreographing work for German and Swiss dance companies. Between 2006 and 2015 he was very busy conducting workshops and classes in Munich, Basel, Catania and Zurich. In both 2012 and 2013 he won the Ballet-ex Roma choreographic competition. In 2014 he founded the Nunzio Impellizzeri Dance Company, which is located in Zurich.

What is Impellizzeri’s view of dance? What does he think dance should do? He says that for him dance is about personal observations of human behavior and the ways that behavior can fit into the social construct. He wants to push his audiences, to surprise them and make them question their social behaviors. He is not afraid of intense body language or naked bodies. He uses space in some very innovative ways and speaks in a language of surprising dynamics.

Some of his recent works include Way Out, Lost and Found, Quieta. . . Inquietudine, and Underskin. Way Out deals with ways of overcoming losses, a topic that is very Sicilian. Over the centuries Sicilians have learned about losses of all kinds and have developed many ways to live with loss.

In 2016 Impellizzeri created a new work called In.Quieta Rooms, which premiered in February 2017 at the Theater am Gleis in Winterthur, Switzerland. Quieta and her husband live in two rooms, their innermost desires hidden and never expressed. Their marriage deteriorates into a boring daily routine and leads to a dead end, a dead end that is a sad and painful reflection of present-day life.

Roberto Zappala is a major figure in the Sicilian world of dance, especially in Catania. In 1989 he founded the Compagnia Zappala Danza of which he is the artistic director and principal choreographer. e company is in residence at Scenario Pubblico, an international choreography center in Catania. Zappala is the artistic director of Scenario Pubblico.

Zappala’s choreography—more than 30 works—is well known in Europe but also in Central and South America, the Middle East and South Africa. One of his latest pieces, La Nona, received the Danza & Danza award for Best Italian Production in 2015.

Like Impellizzeri, Zappala wants to take audiences to places they have not been to before. He often works with dramaturge Nello Calabro to bring together dance and some aspects of the theater. In 2011 Zappala choreographed a new work called Sud-Virus for the Goteborg Ballet in Goteborg, Sweden. In recent years he has also expanded into the world of musical theater, directing productions of Jesus Christ Superstar and Evita, musicals by English composer Andrew Lloyd Webber. He has also directed and choreographed productions for the Scuola di Ballo of the Teatro Scala in Milan and the Balletto di Toscana in Florence. At the University of Catania Zappala often conducts classes in body language and the language of dance.

Dance, like painting, sculpture and literature, can explore the cultures that have controlled Sicily and aspects of those cultures that have shaped the lives of today’s Sicilians. Choreographers like Catania’s Roberto Zappala and Acireale’s Nunzio Impellizzeri can bring centuries of life on the streets and fields and hills of Sicily to the stage where they can help us develop a better sense of what it is like to be Sicilian.

Choreographers have a magic toolbox from which they can build pictures that fascinate, intrigue and entertain. They can create mirrors that force an audience to take a better look at their lives and at a society and its mechanisms. Sicily, with its centuries of control by outside cultures, is an extravagant catalyst for dance. One day Nunzio Impellizzeri will search Sicily’s Greek heritage and will discover his inner satyr. Then he will choreograph a bawdy, inebriated festa furiosa about Sicily’s ancient satyrs.