Easter Celebrations in Sicily and in Palermo (“La Santa Pasqua”) 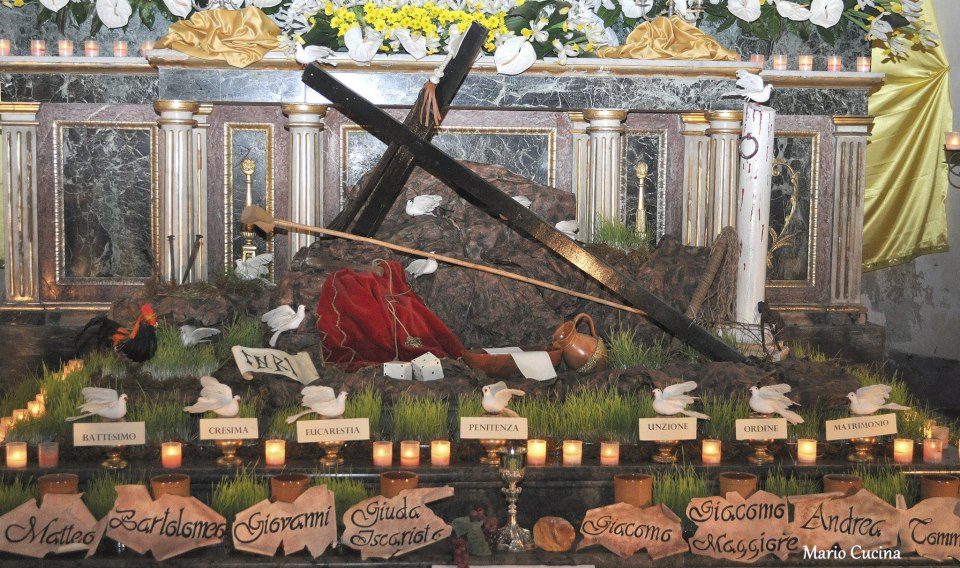 Since early times, eons before the Jewish-Christian religion expanded in the known world, the period between the months of March and April after the Spring Equinox (from the Latin: aequus meaning equal and nox meaning night) that occurs around March 20th, was celebrated with rituals, traditions and magic; the deities were worshiped to gain their blessings and their support.

Spring Equinox marked the end of winter and the time to prepare for the new season, to care for the land and to do all the necessary planning for that time of year. This event was celebrated with the sacrifice of lambs to the gods to gain their blessings for the land and for the seeds planted in the ground; eggs were offered to the goddess of fertility asking her favor for any new life to come into their families.

These traditions were observed from the Vikings in the north of Europe to as far south as Africa and from the Pillars of Hercules to as far east as the known Asian continent. Babylonians, Persians, Armenians, Jews, Germans, Vikings, Greeks and Romans honored their own gods with rituals, offerings and traditions not so different from the present rituals of Easter; in fact with the advent of the Christian religion the pagan holidays and practices were transformed to accommodate, synthesize and merge these traditions.

Easter, or as it is called in Italian Pasqua, is an adopted version of the celebration of the Jewish Pesach, ”the Passage” or Passover, which commemorates the freedom and exodus of the Israelites (Jewish slaves) from Egypt during the reign of the Pharaoh Ramses II and is celebrated with a “Seder”, a family ritual meal, similar to the Last Supper, which effectively was a Seder celebrated by Jesus, a Jew and his disciples.

Pasqua or Easter is one of the most solemn celebrations in the Christian Liturgy, commemorating the death and the resurrection of Jesus Christ and the passage – Pesach or Pasqua – from paganism to a new religion which was to expand all over the world. Easter comes after Palm Sunday and the Holy Week: Thursday, Friday and Saturday are the most significant and important days.

Holy Thursday commemorates the Last Supper and the institution of the Eucharist; a solemn Mass is celebrated with the benediction of the three Holy Oils, oil for the sick, an oil for baptism and one for confirmations, consecrations, ordination and for other functions. It follows the ritual of washing the feet and the fastening of the bells, which will be silent until Easter. The service is followed by a procession to deposit the Holy Eucharist at the Altar of Repose, a chapel decorated by the faithful, less properly called the Sepulchre.

The crucifixion and death of Jesus of Nazareth is observed on Good Friday with profuse and folkloric functions. On Holy Saturday, a Vigil is performed at which time the Easter Candle is lit to signify the radiance of Jesus Resurrected in order to illuminate and win power over the darkness of evil and death. Easter Sunday is the holiest day in the Catholic faith. On this day the churches are full of the faithful greeting each other with blessings and wishes of peace; indulgences and prayers expressing gratitude are offered to God for sending his Son Jesus, who with His sacrifice offered to humanity the possibility of redemption and eternal Life.

Easter in Palermo – The Sepulchers

When I was living in Palermo, it was customary to go and pray at the Sepulchres on Giovedi ’ Santo, Holy Thursday, and visit and pray in at least three churches. The Sepulchres are furnished and decorated by the local parishioners with plants, flowers, vases with wheat buds and offerings of bread and wine. As I remember, every year it was a competition between parishioners and churches contending for the best looking and best decorated Sepulchre.
The most spectacular day was and still is Good Friday celebrated by every church with processions and various rituals. These processions are sponsored by the faithful usually belonging to a trade, a profession or skill.

In the procession the statue of the Madonna Addolorata, Our Lady of Sorrows, and of Jesus Christ, dead after the crucifixion, are place in floats and carried by the faithful through the streets of Palermo following an intricate pattern in order to avoid any overlap with other processions from other churches.

I can remember, I went with my mother to the first procession at the Chiesa dei Cocchieri, the Coachmen’s Church at the end of Via Alloro. Two floats leave the Church of Our Lady of Itria, in the late afternoon; each float is carried by 32 people, guarded by knights in armor and escorted by the cocchieri – the coachmen – dressed in red livery, with white hair colored with flour and with the faithful following through the streets of the district.

In a district called Albergheria in the church of Saint Isidoro, the Panettieri Procession, sponsored by the bakers, is one of the most spectacular. The rituals start on Friday afternoon, in the square outside the church, with a theatrical trial, scourge and crucifixion of Jesus; then He is carried in a sheet into the church and at this point the float with Jesus’s dead body, followed by Our Lady of Sorrows, are both carried though the district in different directions and in an intricate pattern with provision for the two processions meeting with ceremonials, prayers and moving rituals.

The processions start with the drummers in folkloric costumes and the drums covered with black material. Around the “vare”, the floats there have men dressed as Roman soldiers; other men follow wearing robes and masks, and then follow young girls carrying wicker baskets with crowns of long, sharp thorns, nails and hammers used for the crucifixion and a money bag with thirty silver pieces representing what was used to bribe Judas Iscariot. On Good Friday, processions are celebrated in every church in Palermo and all over Sicily, each with their own particularities and characteristics.

Holy Saturday and Easter of Resurrection

On the Saturday before Easter, at noon, the Resurrection of Jesus Christ occurred and the gray curtains were removed from the altars, Holy Communion was dispensed with happy hymns and alleluias for the Resurrection that redeemed humanity of original sin and prayers were offered to thank God in order to bless the coming season for the revival of nature, for new life and for a fertile harvest.

In 1998 with the reform of the Liturgy, the Resurrection of Jesus Christ was changed to Sunday morning as in the original ritual and Holy Saturday is now observed with silence, meditation and penitence: during the Vigil, in the churches the fire is blessed, candles, lamps and the Paschal Candle are lit and other rituals taken place.

When I was living in Italy, the Easter of Resurrection was celebrated on Saturday between 11 and 12 noon; the same rituals are now follow on Sunday morning between 10 and 12 noon.
At the “Chiesa della Gancia”, in Via Alloro, near where I was living, there was the most impressive “calata ra tila”, literally the descending of the curtains. At La Gancia, big and heavy curtains not only covered the altar but also the full arch of the church from the high ceiling to the floor and lengthways; you could not believe that this enormous drapery would fall down and when it came down it was one of the most magnificent parts of the ceremony.

On Holy Saturday, the church was always jam-packed with silent parishioners and the many visitors and exactly at noon, the Resurrection with the “calata ra tila” would take place.
The glowing statue of Christ Risen would appear, the bells would ring again, the huge organ would play in full power, the choir and the faithful would sing Sacred Hymns, doves, the symbol of peace would fly in the air which was full of the sweet scent of incense. These memories are very vivid in my mind and it is a joy to recollect such events.

In Palermo, in Sicily and all over Italy, Easter is not only a religious celebration, it is also an event that reunites families and friends and a gastronomic experience that is celebrated with special food for the occasion. The food echoes pagan, Jewish-Christian myths, observances and traditions going back to Teutonic mythology and pre-Babylonian times. The lamb that was sacrificed at spring time now becomes the main dish on every Italian Easter’s menu’, as it was for the Jewish people for Passover; and in fact it recollects the time when before the exodus from Egypt, Moses ordered every family to sacrifice a lamb, to paint the doors of their homes with its blood and to roast and eat the lamb with unleavened bread.

In Sicily, miniature lambs, made of marzipan or chocolate are prepared for this holiday along with chocolate rabbits representing fecundity. The eggs (a pagan symbol of fertility) are now offered to the children on Holy Saturday imbedded into bread, called “pupu cu l’ova” a puppet with eggs; the eggs are also made with chocolate, with a surprise gift inside it.

Another preparation is the Colomba Pasquale, the Easter Dove, made with cake dough, similar to the Panettone, in the shape of a dove and covered with almonds and nib sugar

On every Sicilian table, the typical main dish for the Easter dinner is lamb served with potatoes and vegetables, preceded by a pasta dish and finished off with the cassata siciliana, coffee, Moscato di Pantelleria and rosolio. The cassata is the characteristic and most famous Sicilian dessert. It is a colorful torte originally made in pre-Roman times with ricotta and covered with honey and fruits, it was offered to the earth goddess to secure fertility and blessings for the spring sowing. Today the cassata is made with a sponge cake stuffed with ricotta cream, covered with candied fruits, fragrant with cinnamon, citrus fruits and it is the classic Sicilian Easter dessert.

In my family the Easter menu’ never changes and as we gather for the occasion we cherish each other’s company and look forward to the dishes that remind us of past times, and of the family and friends with whom we celebrated this important holiday.

Most of these recipes are available on our site or write to us to request the recipes.

We wish to all our readers and friends a Healthy and Happy Easter.

Vincent Ciaramitarohttp://www.siciliancookingplus.com
Formally the operator of Joe’s of Avenue U, the Focacceria Palermitana in Brooklyn’ our family business. I retired in 2003 and a few years ago, encouraged by my wife Terry and my nephews and nieces, I assembled a collection of Sicilian recipes mostly practiced in my almost fifty years working and running the focacceria.