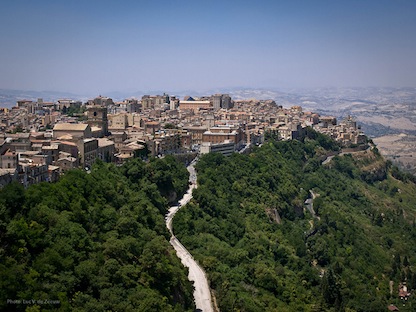 On a clear day, the elevated city of Enna is visible from much of central Sicily.  However, winter mists often shroud its ancient secrets.  Described as the island’s navel, Enna lies at its geographical heart and at the core of one of its most enduring myths: the story of Demeter and Persephone. The fabled origins of Sicily’s fruitful abundance is wrapped up in this tale which has inspired poets and writers for centuries, and within the story’s many twists and turns there is a dark metaphor for our modern age.

Demeter, otherwise known as Ceres, was the sister of Zeus.  She had a daughter, Persephone, or Proserpine to the Romans, who was the maiden of Spring.  The fertility of the primavera siciliana owed its spectacular profusion to their kindly attentions; but an unseen threat lay in wait in the guise of Pluto, god of the underworld.

Pluto lusted after Persephone, the very embodiment of lightness and floral beauty.  His brooding obsession compelled him to drag her down to the stygian gloom of his realm.  Demeter searched in vain for her lost daughter, eventually abandoning herself to disillusion and pain.  Her reproach to the cruel world was to withhold the bounties of the harvest.   Directed by the Syracusan, Arethusa, from her underground stream, Demeter discovered the whereabouts of her daughter and pleaded with Zeus for her safe return.  Persephone’s release was on the condition that she had refrained from eating.  Sadly, she had already consumed the pulp of a pomegranate seed.  This led to a good old-fashioned compromise: she would spend half the year in the sunlit uplands and half in the kingdom of Hades, during which time the still peeved Demeter would continue to withhold the fruits of the soil.  So runs the legend… but what traces remain in the earth of modern Sicily, and what impact did it have for the art and literature of future generations?

Today, approaching Enna from the Catania – Palermo autostrada, it’s easy to see how it commands a striking view of the surrounding countryside.  The motorway slip road directs you to a weaving mountainside helter-skelter which ascends the outcrop in short bursts.  Enna’s maze of twisting streets will eventually lead you to the impressive Castello Lombardia at the pinnacle, where the nearby Rocca di Cerere surveys its fertile dominion.  Adherents worshipped Demeter (Ceres) for centuries on this very spot.  Little of the classical architecture is left, but that is perhaps fitting for a goddess of nature: the view to Etna and beyond represents her heritage.  But it is a fragile Eden as the myth itself suggests.

The light imprint of Persephone’s footsteps can also be found in the neighbouring town of Pergusa.  Lake Pergusa is Sicily’s only remaining natural lake and was the location for her disappearance.   Part of the area is a protected nature reserve and part given over to the more earthly pursuits of motor racing.  The archaeological zone, Cozzo Matrice, has a collection of ruins dating from the period including a temple dedicated to Demeter.  Diodorus Siculus, the classical Greco-Sicilian historian, even mentions it as the site where Pluto’s chariot emerged from the underworld.

The myth has haunted the imagination of many, Sicilians and foreigners alike.  Italians even drink a Ceres beer!   The story had an inevitable attraction for the Romantic poets of 18th and 19th century England.  The Italianophile, Percy Bysshe Shelley, was drawn to it like a moth to a flame.  His lines ‘Sacred Goddess, Mother Earth / Thou from whose immortal bosom / Gods, and men, and beasts have birth…’ amply reflects its elemental quality.  Coleridge, who spent time in Messina and Syracuse, was more taken with the Arethusan aspect of the legend.  In one of the most famous poems in the English language, seemingly set in far off Cathay, he can’t resist a reference to her underground waters.  ‘In Xanadu did Kubla Khan / A stately pleasure-dome decree / Where Alph, the sacred river, ran / Through caverns measureless to man…’

Virgil, Ovid, Thomas Moore, John Milton… the list of devotees is endless.  One of the more interesting modern references was made by the Sicilian-American writer, Gioia Timpanelli.  In her book, Sometimes the Soul, one of her characters, Costanza, conjures up images of Enna’s flower-covered fields.  Artists have been no less reticent in their depictions.  From Bernini to the Anglo-Italian, Dante Gabriel Rossetti, Demeter and her daughter have continued to inspire.

All over the world, we are so reliant on the good intentions of Demeter, that the potential of her permanent withdrawal still causes us anxiety.  In part, we seem intent on causing this to happen.  Maybe we are the pestilential Pluto, blindly dragging our fragile Persephone to the depths with little thought for the consequences.  Yet we also have the capacity to be Zeus, capricious but capable of arbitration, leaving Demeter to spread the universal joys of the primavera siciliana.