Farmers for Passion (Contadini per Passione) 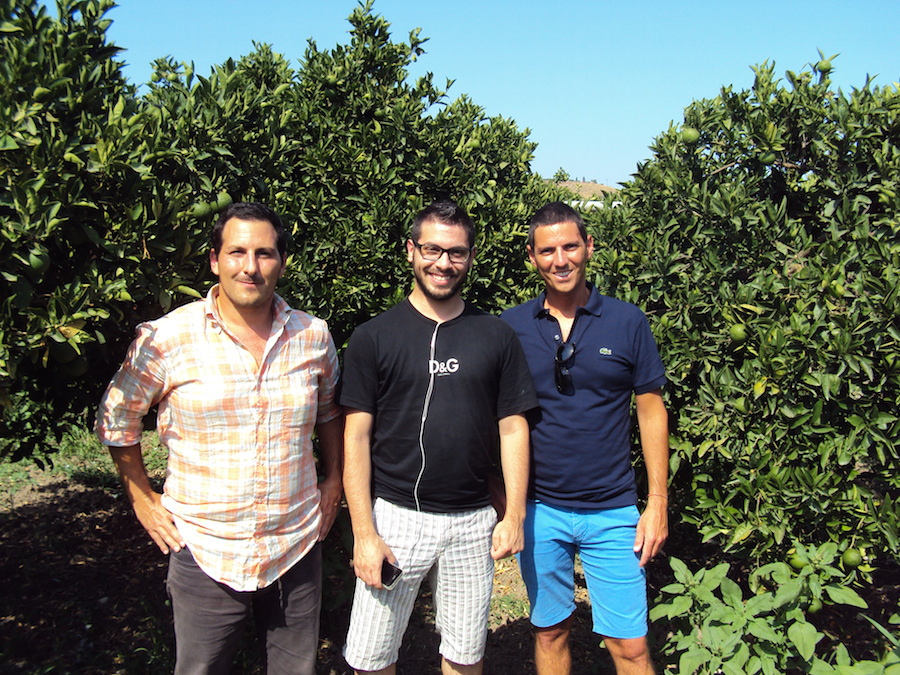 Last summer, when I first arrived in Cianciana, I became friends with an old man, nearly 80 years old, named Giuseppe. He took me for many drives in the surrounding countryside and each time he did so he became very sad and emotional about what was happening to the land where he was born and raised. Sometimes Giuseppe would sing an old sad song as he drove along the roads he knew so well.

‘Look what they have done,’ he said, gesturing with his arm through the open window of the car. ‘When I was young, all this was planted with grape vines, olive trees, oranges, everything. Now, the children don’t want to know anything about the land. They don’t care. It’s a disastra.’ (he always pronounced that word wrong).

I tell you this little anecdote because when I see Giuseppe this summer, I will have some good news for him! I can tell him all about Contadini per Passione and about the grandchildren who decided against the 9 to 5 rat-race in the big city in favour of loving their land and farming with passion!

I found out about these passionate farmers when I was contacted by Paolo Barbera, the founder of Contadini per Passione, who, together with his brother Marco, and their cousin Francesco Corsentino (Kiko), have devoted their time and attention to the cultivation of an extensive orange grove in the district of Cannagrande, an orange-producing oasis set in the Verdura Valley on the outskirts of Ribera and one of the oldest orangeries in Sicily. 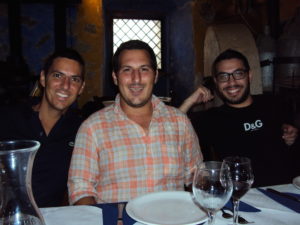 In 2003, the two brothers, Paolo and Marko, inherited the land from their grandmother, Anna Birritteri, whose husband, Luigi, was a farmer. However, their son, Sebastian didn’t want to care for the land and became a construction engineer instead. I would imagine that the grandparents’ influence on the two grandchildren had great effect since both of them have returned to the land. They tell me they are the fourth generation to do so.

Each of the three members of this young and dynamic company has a specific role to play in the success of their collaboration. Paolo, who I like to describe as the ‘alchemist,’ has great love and devotion to the earth along with an innate understanding of agriculture. He started out studying Economics at the University of Palermo but soon decided that wasn’t for him. Deep down he wanted to be a farmer, it was in his genes, ‘an artist of the land’ as he describes it.

He explained that there are many stages to becoming a farmer, so in order to learn he then entered the best school of all, the school of hands-on experience with the help of other farmers whose advice he sought. The orangery had been abandoned and he managed to bring it back to life. Bravo, Paolo, a great achievement!

Meanwhile, his brother Marco was busy studying law and can now, happily, call himself a lawyer. But, the land was calling him too and in 2009 he walked away from law and decided to join his brother. When I asked him why he did this, he replied: ‘I didn’t want to be a lawyer. Because… I never wanted to be a lawyer!’ I am quite sure that both Anna and Luigi look down on these boys with great pride and satisfaction nowadays, not to mention with a huge big grin on their faces!

Still, it’s always an asset to have a lawyer on your team, so I’m sure his degree won’t be wasted. Meanwhile, Marco’s role is well suited to being the ‘contact man,’ the one who gathers the crowd, the one who can reach out and spread the word, the gregarious one. An important role in any endeavour.

At about the same time their cousin, Kiko, decided to come on board in the capacity of ‘web master.’ Kiko studied computer science in Pisa, so given his techno background, his role is highly important in getting exposure on the internet and he is responsible for the company’s website at: www.contadiniperpassione.it where you can find out much more about all the lovely produce available and great recipes using oranges. 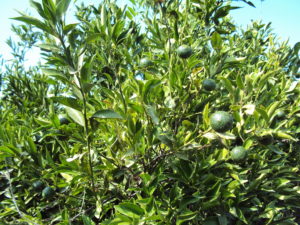 Through the internet, it’s main line of communication, Contadini per Passione is reaching out to the general public and below is a snippet of information from their site on the importance of biodiversity:

‘These days we speak too often about the word “biodiversity” probably abusing the term. The meaning of the term is very simple and basic. It indicates the variety of all living organisms on Earth and of all the environmental systems in which they live. … biodiversity is a kind of superstructure that guarantees, through a perfect balance of all ecosystems, a perfect relationship between all living beings.

…the “Report on the condition of land consumption in Italy” presented on 24 July in Rome by the Minister for Agriculture, where it states that in our country every day 100 acres of natural land is replaced with cement, an irreversible phenomenon that involves the best land, the most fertile, and paradoxically, that which could generate income and produce work.

As pointed out by Carlo Petrini, founder of Slow Food: … to be in danger is not only the land and the landscape, but our food security.’

I was invited to meet the crew behind this venture recently and since their English is about as lacking as my Italian, I brought along my friend Saverio Carubia to act as translator and historian. We were taken to Caltabellota for an excellent lunch at Ristorante Mates (recommended), followed by a visit to the orangery. While the heat of the afternoon bore down on us as we walked among the trees, I could sense the pride in these boys, the fulfilment in what they were doing and it was good to see. 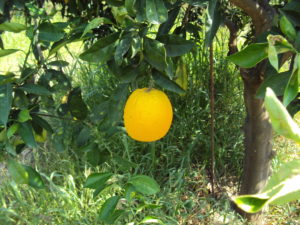 Since it’s only August now, the oranges were green, growing and looking healthy. Along the way, Saverio insisted that I photograph one particular, rather large orange from last year, still on the tree all by itself. This, I was told, is called a ‘burduni’ a type of orange bigger than usual and apparently the only part you can eat in the white of the very thick peel itself, the rest of the orange being sour and dry. I’m also told that this word burduni can be used to describe someone who is very old-fashioned!

Besides great oranges, there is one item on the list of products they sell to which I zoomed in – pompelmi – grapefruit. It’s a long time since I’ve had a nice grapefruit, so I’ll be ordering some of those when the time comes. The other thing I’m looking for is good fresh orange juice, preferably delivered to my door… or, the local shop will do. I don’t think Sicilians realise that if we could, we would drink fresh orange juice at breakfast time (or any time), and not be willing to substitute it for some sweetened, gooey, bottle of pop. We also like a bit of grapefruit as a starter before dinner now and again… hint, hint.

Paolo’s idea to rescue the land and protect it from the clutches of destruction was a good one and this kind of thinking needs to be recognised more. As Giuseppe once told me:

‘I asked my 12-year old grandson at the time if I should sell the land. I was only joking, really. But he said, no. I asked why not? Because money flies out the window, he said, but the land doesn’t, it stays here.’

Orders for Christmas can be placed up to the middle of December.