The “Festino” of Santa Rosalia in Palermo 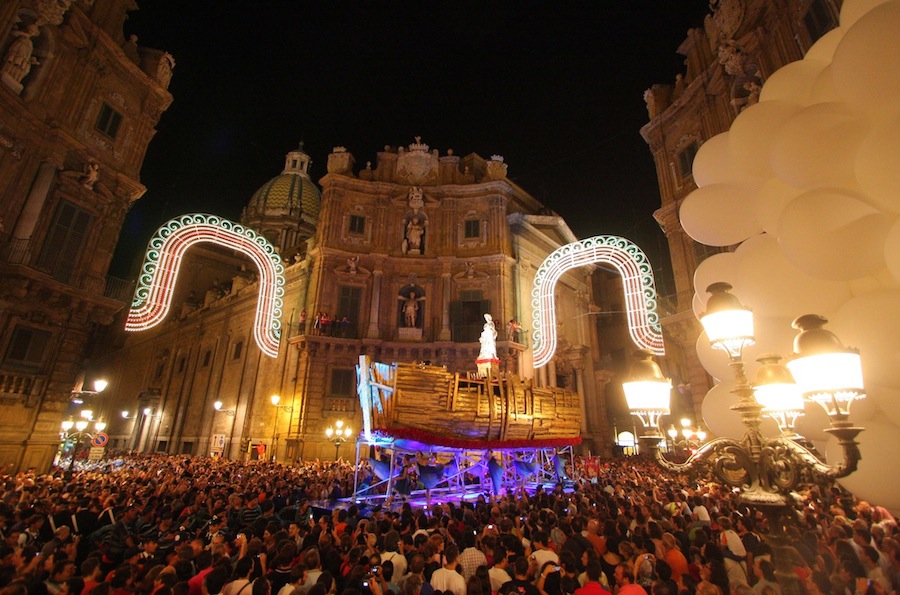 Every year on the 14th and 15th of July, Palermo celebrates the triumph of their patron saint, Santa Rosalia. The Fistinu also called a granni festa (the great festival) is the most important celebration of the year and represents the city’s highest expression of tradition and folkore.

The tradition of the festival dates back to the year 1624 when Palermo was tormented by a terrible plague. 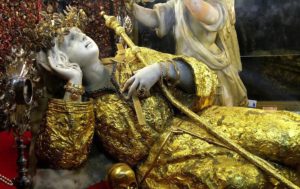 Santa Rosalia or Rosalia Sinibaldi (1130-1166) was born of a noble family and lived in the court of King Ruggero. Devoutedly religious she refused to marry count Baldovino to whom she was promised. Rosalia took refuge in a cave on Mount Pellegrino where she retired to the life of a hermit until she died.

During the plague of 1624 Santa Rosalia appeared to a hunter indicating the cave in which her remains were to be found. The relics were brought to Palermo and carried in procession three times around the city and the plague was defeated. Since then the people of Palermo honor Santa Rosalia as their patron saint for the blessing received.

The symbol of the festival is the Carro Trionfale (triumphal float) on which the statue of Santa Rosalia stands on a red-rose flower bed. The vessel-shaped float represents the strong will of the people of Palermo to overcome their sufferings with the help of the Santuzza. 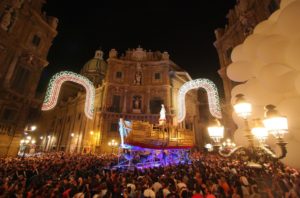 The highlight of the festival is the parade of the Carro Trionfale hauled by oxen along the streets of the Cassaro, the most ancient quarter of the city. Departing from the Cathedral, the Carro begins the procession along Corso Vittorio, Piazza Bologni, the Quattro Canti and through the Porta Felice reaching the Foro Italico. Along the way musicians play traditional festive tunes creating a great atmosphere full of folklore.

This mix of folklore and religious fervour culminates when spectacular fireworks light up the Foro Italico and the Cala (little port).

As with all folkoristic festivals, the Fistino di Santa Rosalia has its gastonomic traditions. In Palermitan families, the delicious pasta con le sarde (pasta with sardines) is a must during these days. Other specialities are found along the way on the traditional street food stands. Delicious sfinciuni (Sicilian pizza) will assail your nose with its appetizing oregano and onion tomato sauce aroma. 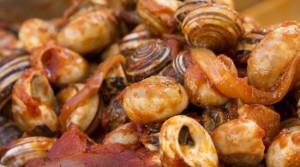 It is possible to taste beddu purpu (boiled octopus) with the taste of the sea and a squeeze of fresh lemon juice. Another Fistino tradition of which Sicilians are fond are the babbaluci (small boiled snails) sauteed with olive oil, garlic and parsley. A delicious slice of watermelon is the perfect finish which you can find at the milunaru (watermelon vendor) stand.