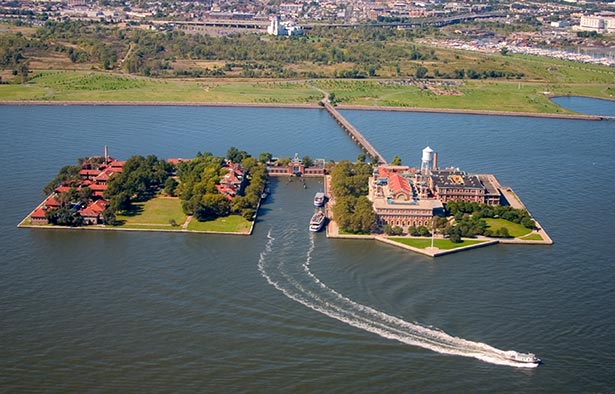 There are several common misconceptions about the immigrant experience at Ellis Island. One is that the handwritten names on early ships’ passenger manifests were actually the signatures of the immigrants themselves. That’s not true. The forms were filled out by a ticket agent or ship’s officer at the point of departure and reflect the handwriting of that particular official. Besides, a great many immigrants were illiterate and could not write their own names.

Another mistaken belief is that “names were changed at Ellis Island”. For the same reason given above, this is not true. The names were written at the embarkation port. They may have been misspelled, but they were not changed to “American versions” there. If names were changed, it was generally done after the immigrant was in the U. S. It was done either by himself, to “fit in”, or by an American employer, teacher or official who could not or would not pronounce or spell the name correctly. Similarly, if a line was drawn through a manifest entry, crossing out a potential émigré’s name and other information, that was also done before sailing. This does not mean that “the person was rejected at Ellis Island”, but rateher that the individual had either cancelled the trip or had not shown up in time for departure.

But as I have previously mentioned, not every immigrant came to America through Ellis Island. In addition to links to Ellis Island arrivals, the Steven Morse site at http://stevemorse.org/ellis2/ellisgold.html has links to sites that access passenger information for Castle Garden, Baltimore, Boston, Galveston, New Orleans, Philadelphia, and San Francisco, as well as records of outbound passengers from Hamburg, Germany, Canadian border crossings, and Canadian passenger lists. Not surprisingly, in the late 1800s and early 1900s, many Sicilians settled in or near the communities that had ports accepting immigrants: Boston, New York and Philadelphia funneled contadini and sulfur miners to the farm fields and the coal and salt mines of the Northeast; New Orleans brought them to the cotton fields and the sulfur fields of Louisiana, and so on.

Castle Garden was located near “the Battery” on New York City’s Manhattan Island. It was also known as Castle Clinton. Starting out as a War of 1812 fort, in 1855 it became America’s first immigrant receiving center, welcoming more than 8 million immigrants before it was closed in 1890. Castle Garden was succeeded by Ellis Island in 1892. The records of immigrants arriving at Castle Garden are not available on-line in original form, but have been transcribed onto standard forms. These can be accessed from the Steven Morse site, or also for free by using the “Search” button at the site http://www.castlegarden.org Enter as many of the following that are known: ship; departure port; first name; last name; occupation; country, province and place of last residence; and date. The site will return a list of possible persons. Selecting one from the list will give details about that individual, and may include a name of a relative left behind, a destination, and other information. Remember, this is transcribed information. Any of the personal or place names may have been misspelled by the indexer, and you must be flexible in your search.

For manifests covering the other ports listed in the Steven Morse site, that site transfers you to the particular website that accesses information for those ports, primarily www.Ancestry.com. Note that Ancestry.com is a subscription site, so when you’re transferred there, you must log in if you’re a paid subscriber, or agree to the trial terms, or sign up for a monthly or yearly subscription.

Because they conformed to American immigration policies, the manifests for the U.S. cities listed above generally have the same format and details as I described for Ellis Island manifests. Even when you know your ancestors arrived at a specific port, if you can search at more than one venue (say, at both ellisisland.org and Ancestry.com), you should do so. A name that may be indexed incorrectly on one may be listed properly (and therefore be easier to find) on another.

Above all, if an image of the original handwritten or typed manifest is available, you should download or order a copy of that image, so that you can read and interpret all of the details for yourself, rather than depending on an indexer’s interpretation.