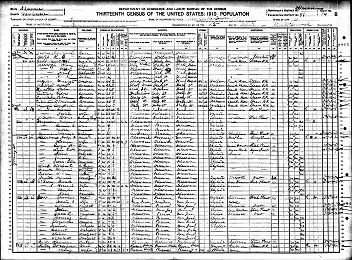 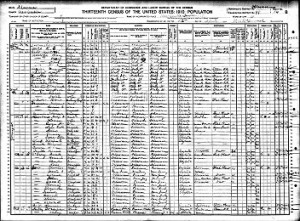 While perusing individual census listings, note the township, county and state where the census was taken. You can contact churches, courthouses or public offices in those localities for other records: naturalization, birth, death or marriage records, etc.

US Census questions varied over the years. Here are some that were asked in 1920.

Address: Be sure to distinguish between house number (address) and the sequence number indicating the order in which the census was taken. Street names and house numbers allow location of the actual property where your ancestor lived, and can help to find nearby churches, cemeteries, local funeral homes, schools, etc., where other records about your ancestors may exist.

Name: Remember that to search on-line or digitized census records by name, you may have to use innovative or imaginative spellings of the name. Usually the head of household’s given name and surname are listed, with only given names for the rest of the family.

Relationship to head of family: Study the family members’ names and relationship to the head. A woman with a different surname than the head may be listed as “mother-in-law”, thus giving you the “maiden” surname of the wife of the head of household. When a surname listed for a “daughter” is different from that of the head, it’s probably the married surname of the daughter.

Sex: Errors here are not uncommon. Young children with “foreign-sounding” names may have been attributed the wrong gender. So your grandfather Andrea may have been incorrectly listed as a girl, or your aunt Carmen as a boy! Use census information as a guide, not as gospel.

Age: The person’s age at last birthday. Infants’ ages may be given as years and fractions: 27/12 means the child was two years and seven months old at the time. The date when the census was taken is at the top of the page, and by subtraction, a year of birth can be calculated. Don’t be surprised if ages on the census are different than what was recorded elsewhere.

Marital status, including that of children, helps confirm previously found information. Year of immigration and country of birth help in locating passenger manifests, which may list town of birth. Notes reading al, pa, and Na stand for ‘alien’, ‘papers applied for’, and ‘Naturalized’.

Occupation is noted on the 1920 census, and also on many passenger manifests. Matching a person’s name, year of birth, occupation and year of immigration, as given on a census, with the information on a manifest can corroborate that the records are for the same person.

Make note of the other names on the census, neighbors of your ancestor. They may be his relatives or friends, and research on their backgrounds may unveil otherwise unknown information about your ancestor, or ways to find it.

The censuses prior to 1920 and those subsequent provided essentially the same information, with some variation. The 1900 census, rather than giving a person’s age, lists the month and year of birth, while the 1910 and 1930 censuses list “Number of Years Married” or “Age at First Marriage”, from which you may determine whether the couple was married in the US, or before they came here, aiding in the search for a marriage record.

Censuses, especially those of the late 1800’s and early 1900’s, carry meaningful data about our immigrant ancestors, and are a valuable source of information for researchers.