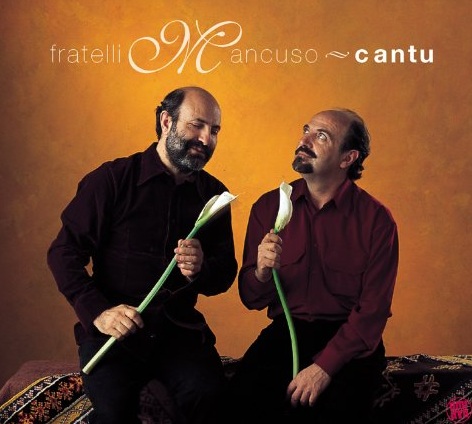 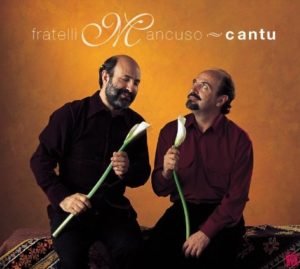 Translator’s Note – The Sicilian brothers Enzo and Lorenzo Mancuso, musicians and musicologists, put on a concert in the November of 2009 to open Seville University’s conference dedicated to Leonardo Sciascia on the 20th anniversary of his death.  Alejandro Luque went to interview them:-

Those of us who once thought that Sicily was an island without music get an emphatic rebuttal from the Fratelli Mancuso, Enzo and Lorenzo, two brothers originating from Sutera in the central province of Caltanisetta.  They have spent 25 years not only studying and recovering their musical heritage, but also giving it continuity through their new compositions.

“In Sicily, music accompanies every aspect of life.  It has always given a rhythm to the daily routine, to that of the peasant or the miner…”, explains Lorenzo.

Referring to the laments of the liturgical repertoire linked to Easter, as a singer and musician he also notes, “that they represent the layering of the entire Sicilian musical inheritance, with Arab, Byzantine and Christian elements.  Everything came from abroad.  Each colonization left a trace, and together it has finished with the development of a very particular style”.

However, these songs have continued to demonstrate a marked secular character, even to the point of being always sung in the street, never in church.  “The clergy have often been opposed to these songs, among the reasons is the fact that what really lies beneath the suffering of Christ (the same with the symbol of Maria) is a reflection of human pain and toil”, he adds.

This element of suffering is a constant in the entire Sicilian musical tradition, “In the peasant song there are many lasting Arab melismas (the move between notes whilst singing one syllable of text).  It isn’t a light song style; it always has a strong dramatic element.  As Sicilians we are also sons of the Greeks, and their sense of the tragic.  Just look at the Sicilian dialect, a future tense doesn’t exist, you have to use a circumlocution to form the future”, comments Lorenzo Mancuso, although he admits that some happy melodies do exist, albeit pegged to social celebrations.

Another question relates to music associated with the mafia, which Lorenzo considers a relatively recent phenomenon.  “Today, this issue is spoken about a lot, but before it was a big taboo.  That never stopped poets like Ignazio Buttitta, in the Palermo of the fifties, who would write a great deal about the mafia.  But it was still the rural mafia, not that of Berlusconi”.

Enzo and Lorenzo’s training is autodidactic.  “We started playing the guitar with the local barber.  The barber’s shop was our music academy – when they finished cutting your hair, the barbers would play the violin, the guitar, and turn their business into a music salon.  We started by looking at their hands, then we dared to try the violin, the lute, and we tried to modulate our voices like the old men in the village, precisely opposite to bel canto.  A troublesome voice, deliberately discordant, that makes those listening feel somewhat less relaxed”, he asserts.

Later, in the seventies, they emigrated to London as foundry workers, and their music went with them.  “We needed to express our reality, ours was the trampled dignity of the emigrant.  So, we found salvation in these songs”, he remembers.

With seven disks on the market, three recorded in Spain, the Fratelli Mancuso lead a seminar at the University of Messina which investigates the voice.  They study the use of the shout in the Sicilian tradition, as a musical element that references, for example, the tragedy of the 1908 earthquake that devastated the city.

On the other hand, they defend the idea that educated music must always lend a very attentive ear to popular expression.  “In just such a way Bellini composed his works, he created Cavalleria rusticana like this.  And so, no doubt, did Bartok, Beethoven, Mozart…”, he adds.

However, the Fratelli Mancuso believe they have reason to worry about the future of this rich legacy of song.  “There is a certain fondness, but young groups try to add a certain spirit of entertainment to this music, lots of colours, danceable rhythms, a lighter version of the tradition”, he comments.

“The real issue is that there isn’t a trace of protection or institutional support.  The current government is trying to cut as much money as possible from cultural funding.  We have had some luck with the work of ethnomusicologists, like the American Alan Lomax, with very serious efforts to gather recordings of women, children and bells…  We have learnt a lot listening to his compilations, but all that is in danger now”, concludes Mancuso.

This interview by Alejandro Luque first appeared on the website, Mediterraneo Sur, (www.msur.es) in November 2009 – translation Andrew Edwards.  In addition to Alejandro’s literary activities he is also a percussionist, playing on the album Olla de grillos by Juan Luis Pineda.