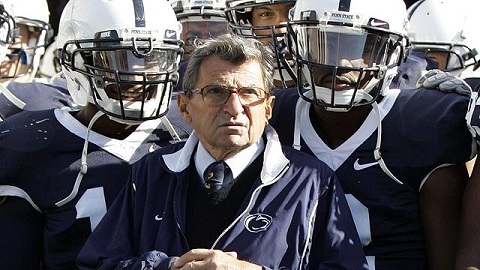 Mr. Louis Freeh’s press conference concerning the Sandusky sex scandal at Penn State on July 12, 2012 had the trappings of a full-blown independent FBI investigation. He was introduced by a British-sounding speaker who praised his accomplishments after which Mr. Freeh spoke at length underscoring the independence of this investigation.

Mr. Freeh’s resume, as the head of the FBI, includes investigating Waco, Robert Hansson, Vince Foster, Ruby Ridge, TWA Flight 800, Centennial Olympic Park bombing (with his department leaking Richard Jewel’s name) has raised many eyebrows and concern over the politicization of his conclusions.

During the presentation of his “independent investigation” of the Sandusky case he was asked by a reporter, ”Outside of the four senior managers cited in this report were any board members involved?” Mr. Freeh answered with an unequivocal and abrupt, “No.” This is not true. His much-awaited report was not an unbiased and comprehensive investigation of all possible participants in this incident.

The Board of Trustees, especially board member Pennsylvania Governor, Thomas Corbett, has an obvious and serious conflict of interest in this affair. There was no mention of Governor Corbett’s, then State Attorney Corbett, two-year investigation into Sandusky’s sexual abuse allegations that faded with no charges filed. There was no mention of Governor Corbett receiving $650,000 from the current and past board members of Sandusky’s Second Mile Foundation, his conflict with President Spanier over university funding, his being displeased with Joe Paterno for not endorsing him for governor and his direct and personal involvement with firing Mr. Paterno. These pertinent facts should have been examined and included in the report.

Furthermore the following were not addressed in the report.

1. Although Mr. Sandusky’s Second Mile Foundation staff and board were sensitive to child abuse issues they were not interviewed or mentioned in the report.

2. During this same time period of 2001-02, President Spanier chose not to investigate a non-athletic professor, Jack Neisworth’s alleged sexual assault on Paul McLaughlin.

3. No interviews with sports commentators and board members about 16 years of numerous rumors concerning Sandusky’s perverted behavior.

4. No discussion of the lack of legal prosecution of the 1998-99 investigation by District Attorney Ray Gricar, who mysteriously disappeared in 2005 and has since been declared dead.

5. No direct interview and due process was given to Joe Paterno in this procedure.

The inappropriate and pompous judge and jury approach by Freeh came up with “a reasonable conclusion” by the evidence presented. Paterno was one of the four people involved in the cover up although he was “only somewhat involved in the discussion of how to handle the situation.”

The main so called “evidence” was an email sent from Tim Curley, the athletic director, to Vice President Schulz and President Spanier that is widely misrepresented in the media as Paterno actually being in the meeting with these three administrators. The email states,” He (Curley) has changed his mind about this plan. After giving it more thought and talking it over with Joe (Paterno) yesterday.”

This is supposed to be the “smoking gun” linking Paterno to the three university managers who supposedly impeded the investigation of Sandusky. It appears to be grasping at straws not a definitive or even a most likely conclusion from this email and offered no other reasonable scenarios.

This dubious investigation into the reasons for Sandusky being able to roam at will on the Penn State campus had an agenda. It protected the hides of powerful and famous board members who made hasty, stupid decisions to shield themselves from any accountability in the prolonged charade by scapegoating a legend. The Freeh stamp of approval connecting Joe Paterno to the Sandusky cover–up was a proactive means of attempting to block looking into any board involvement in this scandal.

Mr. Paterno received no due process in this investigation. He asked to speak to the board on six separate occasions the board cancelled his planned public address and never afforded Mr. Paterno the courtesy to express his side of the story before his brutal dismissal.

This was a disgraceful verbal public lynching of an American hero. Mr. Paterno’s statue was removed from PSU and his record of most wins for a major collegiate football team was unjustly stripped from the record books. The hideous piling on by the NCAA was a devastating punishment without a single violation of their stated rules.

Our media culture has been killing our heroes one by one. Joe Paterno built his reputation by his years of service to his players, the PSU students, his university and professional deportment in all venues. Mr. Paterno’s major accomplishments were having scandal free football programs for over half a century and consistently graduating more football playing student athletes than any other major college program in the nation.

If we are going to obliterate Joe Paterno’s legacy and reputation for not singlehandedly stopping the perverted monster, Sandusky, then we should punish everyone who has heard rumors of Sandusky’s sick behavior. There are many important and powerful figures at PSU, in politics, at the Second Mile Foundation and the sports community who had a high level of awareness of Sandusky’s perversion. Many of these are the people who want the light to shine on Joe Paterno so they can get away in the darkness.

Joe Paterno’s spirit will grow stronger in the hearts and minds of those who know the truth of this incident. You cannot erase an authentic lifetime of good works by creating a flimflam narrative of an honorable deceased man who cannot defend himself.