The Geometry of Space … and People 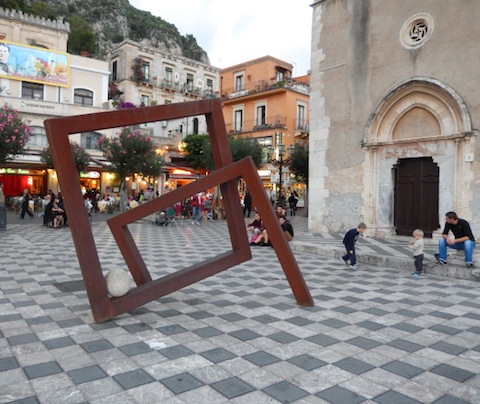 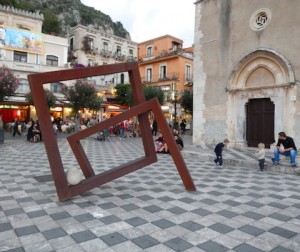 Vincent Pirruccio has worked for most of his life as an artist. His sculptures are magnificent and important. Books have been written about him, though I’d never seen any of his pieces up close. I was lucky to be in Taormina where his exhibition, The Geometry of Space, took place last fall.

Pirruccio’s work juxtaposes the massive weight and size of his pieces, against a feeling of lightness and air. He marks his space, in an overpowering masculine way, while framing it and inviting people in. He dominates in what looks like solid iron, 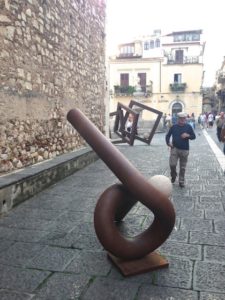 but creates transparent intimacy. The heavy metal structures seem totally immovable, requiring cranes to set them in place. Yet the small ball in each of the works wreaks havoc, sending each piece off balance, skittering into uncertainty.

In Italy, I became acquainted, not only with his work, but with the sculptor himself. He’s warm and loving, and shares his insecurities and vision in such an honest, vulnerable way, you can’t help falling in love with him (and his lovely wife) instantly.

I suppose those insecurities strike a chord with me as both a writer and as a person. He thrusts at all of us the feeling we’re never good enough, the constant thread of insecurity that keeps our entire existence off balance. 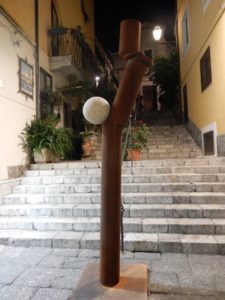 We’re taught stability, like symmetry, are akin to serenity. Vincent Pirruccio finds beauty in the chaos — beauty in the reality of our lives. Here in Taormina, a town literally in the shadow of Europe’s most active volcano, where modern art meets ancient city, that contrast is all the more powerful.

The photos here are mine. Not professional or up to standards by any means. I was supposed to receive professional photos from someone who has done a book on Pirruccio, but they never arrived. Still, there is one thing my own photos show, that hers do not — how Pirruccio’s exhibit, The Geometry of Space, interacts not only with the medieval environs of Taormina, but with the people who inhabit that space. 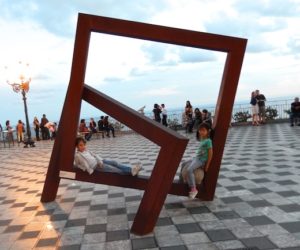 Vincent Pirruccio’s work is infectious. It draws you in. A compulsion arises — you must interact with it. Children are especially vulnerable, playing on the structures as if they were some gorgeous jungle gym, but adults are subconsciously affected, as well. Whether they lean or group around, you can see from the photos below that Pirruccio’s sculptures are rarely alone, even in the vast piazza they inhabit.

Often, there is emptiness outside of the zone, but within the immediate radius of the objects, humans congregate and cluster. It brings a sense of warmth, and rapport, to what might otherwise be cold, rusted metal. It is modern art that inspires a sense of community. 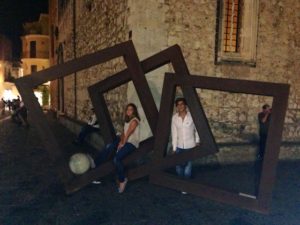 Of course, the feeling about art not being touched is different in Italy. No one batted an eye when kids climbed the structures or one angry man decided to punch the side of piece as he strode by. Perhaps, the emotions Pirruccio’s art elicits were too much for him. As appalled as I was, I was gladder still that these pieces were not cordoned off behind red ropes. 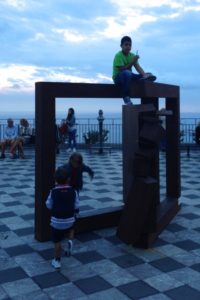 In his interview below, Pirruccio, who is rarely on camera, talks about his difficulty talking and communicating with people. I say, anyone who can engage people in his art so completely has no difficulty communicating at all. His voice may be hard to hear with my ears, but my heart hears him every time I view one of his works.

Pirruccio paid me the greatest compliment as an interviewer by revealing something he has never shared before. He said that the ball in each of his sculptures represents himself. I hope you’ll take the time to listen to the interview above. 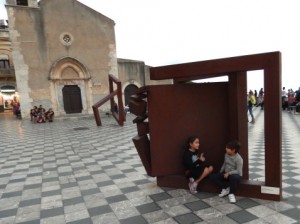 The desire to create, to destroy, to have power is universal. Vincent Pirruccio brings those feelings to life. He celebrates our fragility and our strength — the magnificent imperfection and chaos in us all.

(If you have trouble playing the video interview, please update your Adobe – If you are watching on a cell phone or tablet the subtitles may not be available. Please view the video on a computer to see the subtitles. I apologize for this glitch. Thanks for understanding.)
[geo_mashup_map]

Diana Belchasehttp://topsecretwashington.com
The granddaughter of two Italian knights, Diana Belchase grew up dreaming of castles, damsels in distress, and the gallant princes who rescued them -- except sometimes it was the damsels who did the rescuing. :-) She is a multi-award winning author who splits her time between Washington, D.C. and Sicily. Diana writes spy novels, short stories, and mainstream fiction, as well as nonfiction and speeches. She often uses her beloved Sicily as a backdrop for her stories. In her spare time, Diana writes about her life in Washington, D.C. on TopSecretWashington.com and interviews authors and artists on her TV show, Book Smart, which can also be seen on her YouTube Channel. Her first book, The Spy in the Mirror, a Golden Heart winner and Daphne du Maurier finalist, is expected to debut next year.