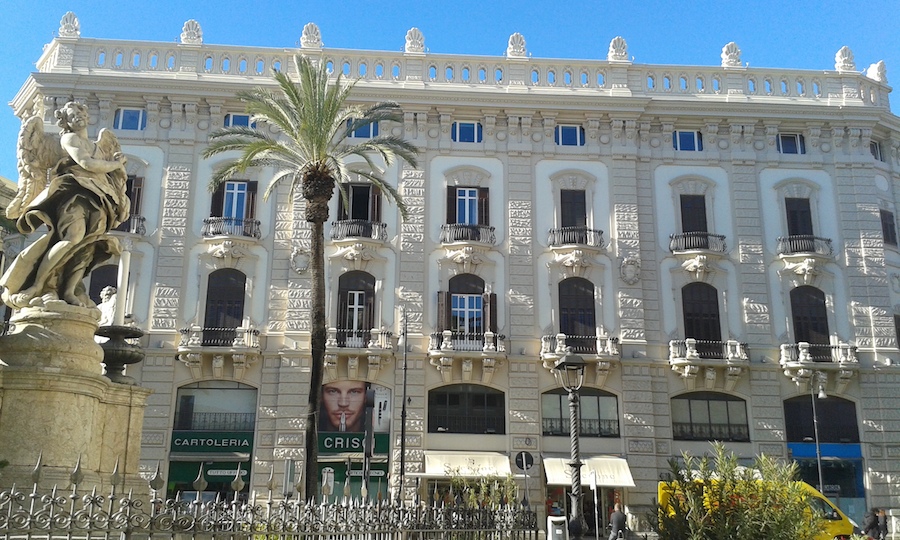 This part of Palermo is  redolent of the foundation of  the city in 734 BC and all the  invadors who were tempted by  Palermitan beauty and its strategic position in the  Mediterranean; it has seen  travellers, artists and hosted  cultures that have given it a  unique shape and character.

When you stroll along its streets and happen to see a scruffy coffee shop,  don’t tur 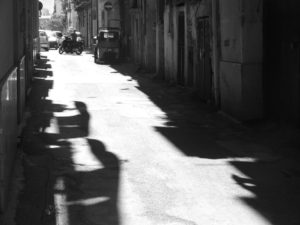 n away, don’t feel  repulsed, do enter. You should  know in advance that the black  beverage will probably not  meet your expectations about  Italian coffee, but in exchange  you may learn something  interesting. The barista I meet  is not usually very busy and  likes chatting with his clients. He recalled, for instance, what the district was like during the time of the wall. It’s ok, we haven’t moved to Berlin, we’re still in Palermo! Well, the man told me that the wall had been built up in Alloro Street and its role was to scare off intruders. He claims that there had been so much poverty that those who couldn’t resist the temptation and infringe on the locals’ privacy, left deprived of what they had with them, and even what they had on, shoes included.

The barista said that everyone calls him il picconatore, a person who works with a pickaxe, because he’d been the one who started tearing down the wall with an axe.

Up until about fifteen years ago there 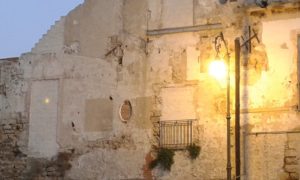 were still plenty of abandoned buildings around the centro storico. Empty. Neglected.They were deprived of their original colour, low reliefs and frescoes. Without windows, without their roofs. Balconies without platforms. Lush weeds and plants growing freely out of façades. Entire streets and squares looked creepy, as if they’d been bombed.

At some point, the local authorities regained their lost awareness, and haunted-looking gems of architecture started to shake the dust off their walls and to wake up from a nasty dream. 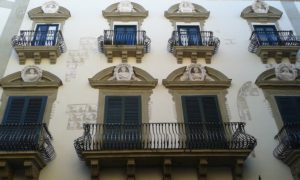 Those who first came to live in the centro storico must have seemed like mavericks (or clairvoyants). However, nowadays it’s trendy to live here, but for some it’s even unaffordable. It’s become multicultural, it attracts people searching for an alternative way of life. The reason being that here you don’t have to grapple with many of the gnawing problems such as traffic. Although you are in the center of the capital of the region, you have the impression that you’re in a small village, and if you’re one of the lucky ones that enjoy a big private garden, you may even feel as if you live in the countryside.

It’s peculiar how two very different realities meet here and coexist rather well: doctors, judges, architects, film makers and artists live next to the old residents of the area who collect scrap metal, run illegal street food stands or who sit (who knows if comfortably) on their chairs in the middle of the street and, depending on the season, enjoy or curse the sun.

This part of Palermo has opened its doors to artisans who work and sell their products right here. There are also numerous ateliers, restaurants, pubs, art galleries and a place that has been squated and thanks to local activists turned into a library. You’ll find museums, monuments, parks, meadows, a big open space for jogging, cycling or playing with your children (be aware! – there are no playgrounds, playing here is demanding and requires initiative and imagination).

It looks as if many want a piece of this delicious cake; some people even say that large numbers of ghosts who used to live in the above mentioned abandoned houses don’t feel like giving away their piece. If they’ve seen the hereafter and decided to remain, there must be a reason. However, the centro storico is not perfect, there’s still a lot to do and please note that there’s space for newcomers. And don’t worry, the local ghosts are harmless.

Agnieszka Kwiatek
Agnieszka Kwiatek is a hispanist, a freelance translator and a Spanish and English teacher. She comes from Gdansk (Poland) which is Palermo’s – where she’s living now – twin town. This is probably not her final destination as she’d like to taste the everyday life of other European cities. What she enjoys most about Sicily is the landscape, the people’s spontaneity, cuisine and, obviously, the climate. Agnieszka loves foreign languages, literature, photography, theater and translating dramas.