After chasing the disparate threads of numerous authors around Andalucia and the venerable byways of millennial Trinacria, we wanted to narrow our focus for the next book and concentrate on just one life story and its attendant literary output. Always fascinated by Lord Byron, but not wishing to approach the aristocrat’s adventures from his own perspective – a story so often told – we cast around for another viewpoint, which would enable us to look at events afresh. When we came across the diary of John William Polidori, the young Anglo-Italian doctor who accompanied Byron on his flight into exile, via the Low Countries, the Rhine, Switzerland and eventually Italy, we knew we had found our muse. For those of you expecting a Sicilian twist to this tale, we must firstly apologise, as there is but passing reference to the island, although Polidori’s adventures do contain much Italian content. 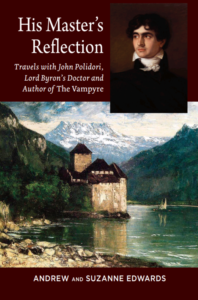 The plan was to follow in Polidori’s footsteps from Ostend in present-day Belgium through Ghent, Antwerp and Brussels to the fields of Waterloo. From there, we intended to trace the diary along the romantic Rhine to Switzerland, where the doctor summered with Byron at the Villa Diodati near Geneva, a summer that would give birth to Mary Shelley’s Frankenstein and Polidori’s Vampyre. Our next plan was to cross the Alps with John and follow him through his father’s homeland to Milan, Parma, Bologna, Florence, Pisa, Livorno, Arezzo and Venice. In 2016, we achieved our goal, in the very year that celebrated the 200th anniversary of events at the Villa Diodati. The upshot of the journey is our new book – His Master’s Reflection (Travels with John Polidori, Lord Byron’s Doctor and Author of The Vampyre). The text is essentially a biography of Polidori interspersed with observations from our journey in his wake.

John’s father, Gaetano Polidori, had been the secretary of Count Alfieri, the famous Italian playwright and libertine. He left Alfieri’s service to set himself up as a translator and author in London. Aware of the perils of being employed by a celebrity literary figure, he warned his son against taking a job with Byron. Polidori was both star struck and stuck for employment. He had qualified as a doctor from Edinburgh University at the tender age of 19, only to find that his native city did not allow doctors to practise as a GP until they had reached the more mature age of 26 and had sat for a London-based exam. Polidori, always a dreamer, had never dreamt of a career in medicine; his heart lay with literature. Therefore, when Byron offered him the opportunity to become his travelling physician, the handsome John jumped at the chance.

Byron thought that looking at John was equivalent to gazing at his younger self in a mirror, although, if truth be told, Polidori was rounder of face and fuller of hair. Initially, the overly enthusiastic medic did little to upset the aristocrat’s mercurial temperament, although Byron’s friends, notably John Cam Hobhouse, were rather cold towards Polidori. The context of his first meeting with Byron involved the poet’s hasty preparations to leave England – a forced departure given the rumours swirling around London of incest with his half-sister and bisexuality. Byron, already famous for the poem Childe Harold, had been notoriously dubbed ‘mad, bad and dangerous to know’ by his spurned ex-lover, Lady Caroline Lamb.

Despite the mechanical failures of Byron’s over-priced carriage – which, in fact, he never paid for – the progress from Ostend to Cologne was relatively smooth with regard to the relationship between doctor and patron. Things began to take a turn for the worse when the pair started to follow the Rhine. John now had the feeling that he was a ‘purse to the tassel of merit’, in other words, a mere adjunct to the main man, a roadie to Byron’s rock star. The poet knew of Polidori’s literary aspirations, having sat through readings of John’s early attempts at play writing. In many ways, this gave the aristocrat fuel for his acid tongue, which could be even more biting because of John’s thin skin and quick temper.

Whilst crossing the Rhine near Bingen, Polidori is reputed to have asked the poet, somewhat arrogantly, what he could do that the doctor couldn’t, prompting Byron to cut him back down to size with the cutting riposte that he could sell 14,000 copies of a poem in one day – an answer calculated to hurt John’s most vulnerable feelings, those related to his literary ambition. It would have been easy for Polidori to parry with a jibe about his ability to conduct surgical operations, but this would have meant little to a man who had already decided that John’s medical abilities were somewhat suspect.

The pair’s arrival in Geneva was welcomed by Mary Godwin (eventually to become Mary Shelley), her lover Percy Bysshe Shelley, as well as Mary’s step-sister who was also Byron’s lover, Claire Clairmont. If John was hoping to be an equal in a gathering of like-minded poets, he was to be sorely disappointed. John’s sisters had grown up calling him by the affectionate nickname, Poli, a name that Byron subverted into the mocking Polly-Dolly. Polidori knew he was in the process of being shunned by the two more famous men, if not their accomplished female companions. He longed to be part of a literary excursion around Lake Geneva in the footsteps of Rousseau, but the poets were happy to side-line him with the excuse that he should rest his sprained ankle. Furthermore, in her introduction to Frankenstein, Mary Shelley recalls overhearing conversations on the nature of life, death and science which she attributes to Byron and Shelley, although some modern critics have postulated that such conversations were much more likely to have taken place between the scientifically interested Shelley and the medically trained Polidori.

When Byron issued his challenge, that they should all write a ghost story, inspired by the terrible summer weather and gothic readings around the fireplace, only Mary and John fulfilled the promise. Polidori’s contribution, The Vampyre (published many months after), was originally attributed to Byron himself who had started a fragmentary story. John took up the reins and turned his vampire into a veiled portrait of his travelling companion. He even named the blood-sucker, Lord Ruthven, a nod towards Caroline Lamb’s Glenarvon, her revenge novel. Polidori’s Ruthven has a power of attraction, but coldly dismisses and uses people. The novella is not graphic, in the horror sense, but maintains a latent threat which comes to deadly fruition when Ruthven returns from the dead to attach himself to the lead character’s sister. John never received the recognition or money he deserved when the book became a runaway success. Goethe mistakenly thought it was the best thing Byron had ever written.

At the end of the summer of 1816, Byron, buoyed by his friends’ opinions, decided to let the doctor go, dismissing him without notice, although he did offer some severance pay. The highlights of July and August for John had been his trips across the lake to attend soirees and festivities without the poets. He found he could relax and be himself without the need to try and impress or be pretentious. He was welcomed wherever he went, particularly making a hit with the aristocratic ladies, Countess Breuss and Madame Brelaz. He wept as he left Geneva, heading towards Interlaken. He was directionless, poor and depressed.

He passed the likes of the Château de Chillon, which he includes in his novel Ernestus Berchtold, on his way into German-speaking Switzerland. This only exacerbated his melancholia, as it meant he had to leave behind the cantons where he could speak his fluent French. Polidori eventually decided to head for Italy and visit his uncle in Arezzo. However, his money had run out and he was forced to walk the exalted heights of the Semplon Pass down into Domodossola. He nearly kissed the first person he encountered who could speak Italian.

John was captivated by Milan and made friends with a group of sophisticated Italian patriots intent on breaking the Austrian domination of their city. Into this milieu, once again, strode Byron and his friend Hobhouse. One evening, at the opera, Polidori objected to an Austrian soldier wearing a hat and blocking the view. Unfortunately, the soldier in question was on watch and the insults exchanged caused a terrible furore, which Byron and Polidori’s Milanese friends tried to calm. An irate and short-tempered Poldori subsequently found out that he was to be expelled from Milan. Wandering through Tuscany and down to Arezzo in order to visit the family, a desperate Polidori could not find a role or any degree of happiness. Attempts at establishing himself as a doctor in Pisa failed.

On returning to England, he looked to friends in Norwich, where he wanted to set up as a general practitioner. Riding a horse and gig through the grounds of Costessey Hall, he crashed into a tree and was very badly injured. Although near death, he eventually recovered only to find that his speech patterns and thought processes became increasing clipped and aphasic. This must have contributed to a series of bad life choices, including the loss of too much money when gambling in Brighton. On the 24th August, 1821, John William Polidori was found dying by the family maid at the Polidori household in Great Pulteney Street, Soho, London. His death at the age of 25 was a tragedy. The coroner gave a verdict of ‘Death by the visitation of God’, although the family, including his nieces and nephews, the Rossettis, always thought he had killed himself with prussic acid.

Polidori’s parents never quite recovered; his mother was an invalid for most of her life and his father, although long-lived, refused to talk about him. He left two brothers and three sisters, one of whom, Frances, married Gabriele Rossetti, the Neapolitan poet. Their children included the painter, Dante Gabriel Rossetti and the poet, Christina Rossetti. As an aside, Frances’ sister, Eliza, was the only Polidori to make it to Sicily when she stopped at Messina en route to the Crimea, where she acted as one of Florence Nightingale’s nurses. A champion of female achievement, John would have been proud of her.

The book is now available from Waterstones, Amazon, local bookshops or the publisher.  Click the image below: