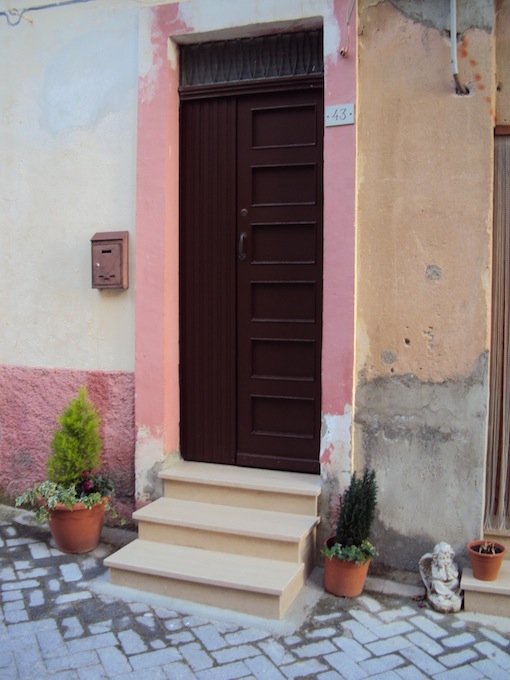 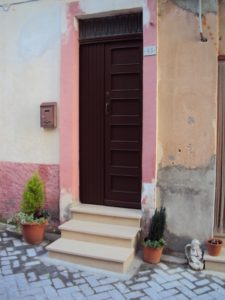 The month of April involved very heavy expenditure from all sides, so now I have to pull back and carefully monitor all decisions. There are always teething problems when one moves and expenses beyond belief. Besides getting the television (which I do not regret at all, and which has kept me company of a cold night), April involved a lot of other cost as well.

One of these costs was a gift I decided to give my next-door neighbour, Maria, to thank her for all the help she has given me over the past several years in my comings and goings from the house. Initially, it was her electricity and water that the workmen used in order to work on the place. Later, it was her saving my life from disaster with the workmen. And, eventually, it was her who gave me the little heaters and a shower when I had no hot water in the place. I definitely owed her one.

She wouldn’t take money nor sweets. So, I decided what to do. She had two steps outside her front door, one a little too high for her at the age of 74. She had told me that she wanted to change them, but couldn’t afford it. I decided that giving her new steps would certainly be a payback for all she had done for me. I wanted it to be a surprise, but I also knew that her ‘minders’ across the road (Santo’s parents), would never let me touch her place without her permission, so I had to tell her about my plan before she went off to England for a month for Easter.

She was thrilled about the idea and only said one thing: ‘Could I ask for three steps, instead of two. It’s just too steep.’ Of course, I said, and meanwhile got a quote from Antonio, which nearly killed me. At first I balked, but realised I was in a corner and had to go ahead. I said okay, do it. He did it, a wonderful job as usual, because he is very good. I paid him and was happy that it was done before her return, a small miracle around here.

She arrived home on Friday last and was delighted with her new steps, which match mine, but I only basically have two! The minders (who can’t mind their own business), must have told her how I balked at the price, because during a two-hour coffee with her yesterday, she said: ‘I want to pay you for the third step.’ I said, no way. Forget it. But, by the time we left each other, and having talked about everything on earth, she came up with a great idea… We were speaking about televisions and internet and things. She then decided to let me in on her internet connection, which, if you think about it, and as she said, my house could easily be an added room to her house, which is how close we are. She gave me the password to her brilliant internet connection and dummy here figured it out, and hey-presto, I’m now connected to her permanent internet connection, freeing me up from a monthly credit on the ‘stick’ I was using. Bless her heart. I told her to let me know if it costs any more money. But God Almighty, what a gift in return. As my mother used to say, ‘One hand washes the other.’ True, true. Life is indeed a funny business.

Cianciana is gearing up for the summer, but summer does not want to seem to arrive this year. The weather is dreadful. Not settled at all. Windy, cloudy, rainy, cool, if not bloody cold. Today is 27 April, and I had to turn on the heat this afternoon… can you imagine? Dreadful. Everyone is in a state of shock! ‘Tempo brutto’, they say.

There was a bit of sun this morning, Sunday, my day off, so went for a little country walk with the dog (who had to have a treatment for ticks and fleas, since ‘tis the season to be inflicted’). That cost a bloody fortune as well. However, touch wood, it seems to be working, since I’ve had her out a few times and she seems free of those awful disgusting creatures. It’s tough at the top!

My new American female friend, Diane, who bought the ten-room mansion next to the Clock Tower, returns on Friday next. I’m so glad. She and I got on very well and we make good friends. It will be nice to have her back. She’s 62. but looks much younger! She’s full of beans on the one hand and so tranquil on the other. She and I are like chalk and cheese, but isn’t that always a case to meet? There’s a lot of teaching and learning going on around here, believe it or not. It’s a good place to be.

I have no long-lost-felt sorrow for Ireland, as such. Ireland gave me nothing. It gave me what my parents gave me, but it never really gave me anything special. It never gave me the ability to survive, without my parents. It never gave me the ability to have a life there, or was that just me? Maybe. I fell between the cracks of the rise and fall in the economy and I actually fell. I never could get up from there. It was too late. I had invested, I had tried, I nearly lost everything. Then, I fought, tooth and nail. I fought to keep the house I bought with somebody else. I kicked him out and fought again to keep the house. I wept and fought again to hang on to that house. I fought yet again, not to let the bank win. I fought yet, again, to keep the house in my name, the only thing I have to show for all my years in my own country. Poor show, poor country. But, I did win a little, or should that be a great success. Meanwhile, I remain homeless in my own country. I do not consider this a success.

I have pulled off a coup in another country, which, at the end of the day, means, I don’t know what to me. I feel fulfilled on the one hand and empty on the other. I have achieved my aim. That’s good. It’s always good to achieve one’s aim. That is fulfilment. It’s okay. A semi-satisfaction, since I do realise that real satisfaction is not ever meant to be attained on this particular Earth. There is a particular limit of every emotion we are allowed to have down here.

There’s no way that the climate or the geography can change anything. There is actually no option left but to ‘love thy neighbour.’ The hardest thing on earth, it would seem. But, the only thing left to do, and the only thing worthy of another day’s life.