An Interview with Roberto Andò: Palermo – Retracing his steps through the Dead City

For lovers of cinema, Roberto Andò is the director of films like Il manoscritto del principe (2000) and Strange Crime (2004). For the wise reader, he is instead the author of Diario senza date, a curious book whose title also matches his big screen debut in 1995. Through a complex game of words and images, fictions and assembled memories, like a system of Chinese boxes, he presents us with a very personal view of Palermo, Sicily’s capital. In Spain, the title was published by Edicions Alfons el Magnànim, but is now out of print, almost a hidden work. (Trans. Note – it has sadly never been translated into English)

Invited by his fellow Sicilian, Ferdinando Scianna, to take part in PhotoEspaña’s latest conference, Andò agreed to recall, for M’Sur, some aspects of his book, more than a decade after it was published. “I wrote the work over a period of years, and at a particular moment I started to combine the texts and images without knowing why”, he remembers. “I only understood afterwards: the written word went so far, and then the images began. Yet, everything we do with the word or image is in answer to death.”

At times, the virtual absence of writers from Palermo came to mind, those who have written about it, the long silence. (Piccolo and Lampedusa are two exceptions). This lack of a voice could have its origin in the dusty light, through which, in order to write, you need an initial act of clarity, a glimpse beyond the dust or the sand, a greater sense of direction amongst the disorder of lost and spent things. To write is to get one’s bearings, to outline a decipherable symbol on an interrupted map, to trace my journey through the tortuous streets of this city where voices get lost.

The author also cites Valéry and his Inspirazioni mediterranee in order to invoke the power of the word as an elemental articulator of this world, as a political tool and an instrument of justice. But, what happens when the word is changed – asks Andò – when it has an undisciplined verbosity, when it loses its prestige? Isn’t the oblivion of language a way of easing death’s task?

Perhaps one ought to return to the core of Diario senza date to answer such questions. The project arose from a breakdown between the creator and his birthplace. 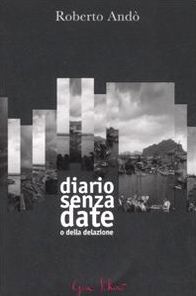 Like so many other Sicilians, Andò initially moved away, “I fled the emeritus city of evil, the capital of evil, the scene of the catastrophe, which, according to Baudrillard, we ought to be able to overcome”, he remembers. He then went back to visit his mother, but the reunion with scenes from his childhood became unbearable. He had a conflict to resolve. “The narrator, through the medium of cinema, must create a balance with his own roots, must settle accounts. The problem was, however, that when I came to do it, I found that Palermo had disappeared, it was a spectral city. Like Atlantis, like Troy. My only mission was as an archaeologist.”

It’s an almost palpable manifestation of our metal state which makes us say: this is no longer my home, I’m leaving. And the horror is unbearable. So much complicity is required to let such horror happen. I don’t see any difference in the exact amount of involvement in an act intending to provoke horror.

It was the Italy of the early 90s, when Andreotti was invested as a senator for life while the mafia undertook one of their most bloody campaigns and the rule of law seemed a risible pipe dream, especially after the assassinations of Falcone and Borsellino. “Life had been supplanted by fiction. Palermo had become a symbolic place, but the inhabitants didn’t realise that the symbol was changing their reality. In a short space of time, it had been converted into a dead city because its goal was its own extinction and the construction of a fanciful image of death.”

The incubation of pain, the slow preparation to mourn for things that were dying, or on the point of death, became a way of distilling the humours surrounding the ruinous events, the ever larger map of spaces given over to wretchedness, devastation and abandon. Mine is a city of laments.

Amongst the island’s traditions, this cult of death was nothing new, but neither was it possible to imagine the heights to which organised crime would raise it, or that it would end up drifting into a grotesque complacency. “Palermo is a place that delights in picturing itself as special. On the other hand, it has left an apocalyptic impression, like a type of variation on the Final Judgement”, explains Andò. “Revelations is an interesting text owing to its conflict between word and image. It’s a book that vomits images. In fact, I think the entire southern part of this world adopts just such an apocalyptic condition.   In Sicily, in particular, an event like the assassination of Falcone or Borsellino illustrates very well the endless death in our recent history. How to escape from all of this? By the word and by the exercise of doubt and reason”.

He continues by saying in a perfectly literary, perfectly authentic tone: “I’m here because this is still a place where it’s possible to think of evil in absolute terms.”

Roberto Andò, who started in the cinema under the wing of the great Francesco Rossi and who ended up collaborating with Fellini, Cimino and Coppola, knew then that his reconciliation with Palermo would become a film that would explore all these questions. Classical mythology gave him the final push: “There is an image that I like very much, the first image from a photographic lens: Perseus, who, distrusting Medusa, polished his shield in order to create a mirror that would intercept the Medusa’s gaze. The end result – she was immobilised upon seeing her reflection. It’s the metaphor through which a lens can disarm death”.

It may be that such a spell hasn’t transformed reality as much as could be desired, but it has certainly served to reconcile Roberto Andò with his home town. Today, the filmmaker and theatre director prefers to call Palermo a perplexed city, a moniker coined by Lucio Piccolo, the poet and cousin of Lampedusa who makes more than a passing appearance in Andò’s book. “Palermo is resistant to reflection; it doesn’t have the capacity to stop itself and think, or to be responsible. And at times all this is also transformed into guilt and blame”.

A city that has perhaps never existed, except as the stone of an inscription relating to a somewhat loathsome if not absolute evil: nameable, known, circumscribed or well cultivated with the thousand delights of a metaphysical, low-key, decline in living.

What can Palermo, or the whole of Sicily, do in order to cast aside such a fate? Roberto Andò reflects for a few seconds and smiles: “To start with, to reject everything that takes place under the carpet. And to forget scepticism, the scepticism of Sciascia when he spoke of Aldo Moro as the emblem of southern pessimism, believing that everything heads towards death and that nothing can be done to avoid it”, he comments.

“Then there’s furbizia (cunning), believing yourself to be more intelligent than anyone else, something often mentioned by Lampedusa. Such a conviction has destroyed the Sicilian, who’s incapable of understanding that this is a blind alley intelligence-wise. Finally, there is an acrobatic-like dimension to the Sicilian identity itself, our Pirandellian soul, which can end in a pernicious game, something very self-destructive. I think that identity is always an invention, but such an invention must have a form. For an artist this can end up being a fascinating phenomenon, for a society, not so much”, he adds.

However, there are powerful forces working against these good intentions. “Italy is currently demonstrating a form of stupidity capable of promoting particular ideas, some very primitive, like the offensive North-South distinction. I think the South has a sincere desire to meet the other, to build bridges. Gramsci’s famous southern question is no longer discussed”, he asserts. “Also the mafia is spoken about as if it has ended. These days the law is used to obtain impunity”.

The writer and Italian filmmaker Roberto Andò took part in a debate organised by PhotoEspaña 09, directed by the Sicilian photographer Ferdinando Scianna.

A translation of Alejandro Luque’s work, The Sicilian Defence, has been published by Kadalu. It consists of 8 stories with Sicilian themes – a window on contemporary Sicilian life seen through the lens of the island’s literary history. It is available worldwide, here is a link to his work on Amazon US. Click the cover: 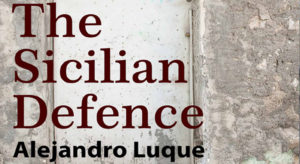