Interview with Francesca V. Mignosa – ‘My Sicily: Life in the Cusp of the Mediterranean Sea’ 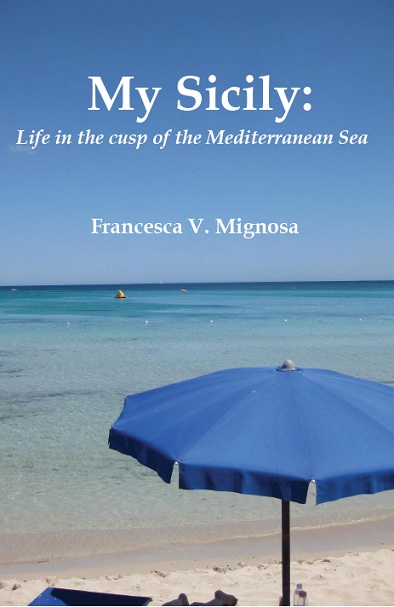 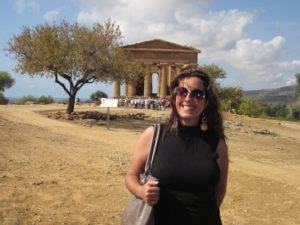 The prestigious Italian Literary Award ‘Sicilia Mondo 2013’ was recently presented to the Sicilian – American Francesca V. Mignosa for her writing and also for her important role as Ambassador of Sicily in the world. This is actually the second time that Francesca has been honoured by the organisation, the first being in 2007, and is a great accolade to her constant promotion of Sicily in the USA and across the world.

Francesca has recently published her first book ‘‘My Sicily: Life in the Cusp of the Mediterranean Sea’ and has shared some of her thoughts and her favourite aspects of the island for the readers of ‘Times of Sicily’ –

Good Morning Francesca. Please can you start by telling us about your book ‘My Sicily’ and what inspired you to write it?

‘Though we left the island, the island never left us’….. I write in my book. “My Sicily” is a collection of personal memories, stories, emotions and favourite destinations as I associate them with each individual place in my native island. It is a personal and educational story (240 pages long) through the island of a thousand scents and colours. I cannot really explain how this project came about – I can just tell you that over the past sixteen years, I have always represented Sicily in the USA (whether I wanted to, or was asked to). This was never my primary intention, neither did it immediately relate to my academic studies, but the more I spoke about my native island, presented events, researched and wrote about it, the more I discovered fascinating aspects of my culture that I didn’t know existed and was so drawn to attempt to describe them in depth and from a different perspective. Sicily is not “mine,” it belongs to all Sicilians and, very affectionately, all Sicilians abroad. The title is such because it describes “my” favourite people, places and aspects of our culture.

You recently won the 2012 Italian Literary Award ‘Sicilia Mondo’ for your writing and your role as Ambassador of Sicily in the world. How did it feel to be so honoured by your home country?

Debra, I was absolutely stunned to receive this news! Also because I had already won the award in 2007 and so winning a second time around was almost unthinkable for me. Through the years, I have always remained close with President Avv. Azzia and Marco Belluardo – they have always followed my professional progress and completely surprised me this year again. I’m so humbled, honoured and delighted to have received such a prominent recognition. I hope to never let Sicilians abroad, and back home, down. I am and can’t be anything else but myself: a Sicilian-American with the best and highest intentions always at heart.

Do you feel that the media has had a negative influence on the perceptions of Sicily across the world?

Perhaps in the past but having now lived abroad for the past sixteen years, I can honestly say that there is a greater fascination towards our island and a more educated approach to the portrayal of Sicily and all aspects of our culture.

How do you think that your book will influence your readers’ understanding of the island and its culture?

My book is a very personal story, but I also conducted a year and half of research and writing. I divided the island into geographical areas: Eastern Sicily, South Eastern Sicily, Southern Sicily, The Heart of Sicily, Western Sicily, Northern Sicily, and the Sicilian Islands. For each individual place, I not only share personal stories, memories and emotions but also the highlights of history, art, cuisine, language, spirituality, the essence of Sicilians from various corners of the island and the values and flavours that make each destination so vibrant and unique. The book is written in a very simple, almost colloquial way, so that anyone, with any background could relate and understand the heart of Sicily and perhaps enjoy the journey so much that they would want to travel to our island! Mine was simply a labour of love – to have 12,000 followers on my blog is almost a miraculous happening for me. All I wanted to do was share a deep passion and love for the beautiful island where I was lucky enough to be born and share the beauty and sweetness of its people.

How easy was it for you to settle into the US after being born and raised in Sicily?

My mom is Sicilian-American so we were raised in a bicultural, multilingual home (speaking Italian, Sicilian, English and French at all times). We lived most of our lives between Sicily and the USA so geographically it wasn’t a difficult transition because we were accustomed to travelling between the two cultures. Obviously, emotionally it was so hard for two teenagers to leave best friends behind but I believe that our destinies are already written and clearly marked. I know it was meant for us to move to the USA, otherwise I might never have written my book if I still lived in Sicily. I believe that everything happens for a reason. I’m so thankful to my parents for having raised my sister and I to embrace the best of both cultures simultaneously at all times.

What similarities did you see between the Sicilian culture and that of second and third-generation Sicilian families living in America?

The values, the food, the spirituality, family, and the hard work ethics.

You have spent a lot of time touring recently to promote your book. Which aspects of Sicily do you miss the most while travelling?

You know, Debra, I feel I am in Sicily every time I talk about my island. I’ve been so touched by the love and support of my readers – they are so sweet and share personal stories of immigration, identity, belonging, cuisine, family anecdotes with me. They make me feel so special. Every time I talk about Sicily, I am in Sicily. As I meet the Sicilian communities of America, I am in Sicily – their warmth and affection is almost overwhelming, but we – Sicilians – know nothing but that abundant love. Even Americans are embracing the book profusely as they wish to learn more about the island from the perspective of a young/recent immigrant with an international background. I’m so touched by their love for Sicily – it is truly contagious. 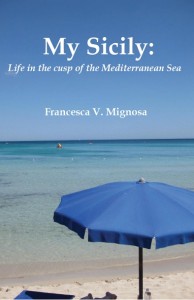 Which destinations on the island would you recommend to our followers looking to travel to Sicily for a short stay and why?

Taormina – It was built by the Greeks merely for its strategic location and beauty. The two remain constants today. It is truly a Sicilian gem.

The Aeolian Islands – My favourite destination in Sicily. Raw, essential, authentic Sicilian. They have indescribable natural beauty and a general sense of wellness.

Which Sicilian traditions or events are closest to your heart?

Do you plan to write any more books?

I’m working on my second book ……….and already started research for my third!

Thank you Francesca and good luck with your work in both Sicily and the USA!

You can follow Francesca’s reflections on Sicily, her book tour, photos and also purchase ‘My Sicily’ on her blog at https://francescamignosa.wordpress.com

Francesca V. Mignosa, M.A., was born and raised in Augusta, Sicily from a Sicilian father and a Sicilian-American mother. Her family moved to the USA in 1997. From 1998-2004 she pursued higher education at Ohio University completing a BA in French, a BA in International Affairs, a Masters in International Affairs and a Masters in Screenwriting, along with a TEFL/TESL Certificate to Teach English as a Second Language. From 2004-2006 she worked as a Screenwriter in New York City. From 2007-2009 she was Editor in Chief of La Gazzetta Italiana, the only Italian American Newspaper in the State of Ohio. Through the years, she has covered the roles of Editor, Journalist, Screenwriter, Interpreter, Translator, and Linguist along with the teaching of Creative Writing, Communication and Public Speaking courses. Francesca has been recognized for her published articles, short stories and screenplays in the USA and in Italy. In 2007 and in 2013, she was the winner – first classified in the world- of the Italian literary award “Sicilia Mondo” for her writing and role of Ambassador of Sicily in the world. Francesca is fluent in Italian, Sicilian, English, French, Spanish and Portuguese. She divides her time between Sicily and the USA. “My Sicily: Life in the Cusp of the Mediterranean Sea” is her first book, published in the USA this past September (2012).