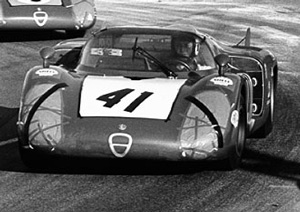 Nino Vaccarella won the Targa Florio three times, and for this alone he remains a Sicilian hero and, his name has become virtually synonymous with that great road race, where large painted letters appearing on the roads and walls on the eve of the event proclaimed W Nino (Viva Nino) year after year in the 1960s and 1970s.

The Palermo-born 70 year old – his birthday was March 4- is a relatively rare visitor to race events. But, not only did he show up at the Goodwood Festival of Speed, he was back behind the wheel of an Alfa Tipo 33, and spent the weekend in the company of those other colourful Italian racers of the period, Arturo Merzario, Sandro Munari and Marco Cajani. Phil Hill made a special point of meeting up with his old Ferrari teammate, and they disappeared into Italian for some while! I had the chance to interview him then, and in November, 2001, spent 5 glorious days in Sicily in the company of Nino, Art, Sandro and Vic Elford. What an experience!

Vaccarella was known primarily for some superb sports car drives, though he had a number of non-championship F1 races, and four Grand Prix races. He drove for Scuderia Serenissima in 1961, and made his Grand Prix debut at Monza that year in a DeTomaso-Alfa. He didn’t qualify for the Monaco race in 1962 in a Lotus, finished 15th in the German GP in a Porsche, and retired at Monza in a Lotus-Climax, before getting a one-off Ferrari Grand Prix drive at Monza in 1965, where he was 12th. His sports car career, however, was much different, with a famous victory at Le Mans in 1964, sharing a works Ferrari 275P with Frenchman Jean Guichet. He won at Sebring in 1970 in a 512S, co-driving with Ignazio Giunti and Mario Andretti in that narrow victory over Steve McQueen’s Porsche 908. Vaccarella amassed a very high rate of finishes in long distance races.

ED: When and how did your racing career start?

NV: I started in December, 1956, in a Fiat which was my father’s car. and in 1957 I bought a Lancia Aurelia 2.5 B20 and used this for two years, and it was very important in giving me racing experience, and it was a difficult car. I also had a Maserati 2-liter 4 cylinder in the early days in which I won a number of races, all in Italy.

These included the big hill climbs like Bolsano and Torino. Then Scuderia Centro Sud and Mr. Mimmo Dei, the boss, gave me a Cooper-Maserati, which was then the new car from England with the engine in the rear and with disc brakes, which I thought was very good in comparison with the front engine Maserati A6GCS I had been racing. I have to say, at the beginning, my father didn’t even know I was driving his car, never mind racing it, so my first driving experiences were not good! I did not have instructions, so I had some trouble, and my father said “you will never drive my car”!

ED: When was your first race outside of Italy?
NV: In 1961, I signed a contract with Scuderia Serenissima, with Count Volpi, a nice team owner, and this was for all cars: Ferrari, Porsche, and Formula One. The first race outside of Europe was in Florida at Sebring in 1962 in the Maserati Tipo 64 which did not last very long. I had done a lot of races in Europe by then, but the first important one was in the Targa Florio in 1958 with my Lancia.

Then, in 1959, I was 10th in the Targa with Giuseppi Allotta in the Maserati. The following year, at the Targa, I was with Maglioli in the Camoradi Birdcage, which was fast but broke. Then in 1961, I had my best result so far at the Targa in the Tipo 63 with Maurice Trintignant. This was a Serenissima car and we came fourth behind the Ferrari and Porsches. I drove the same car a few weeks later with Trintignant and Scarfiotti at the Nurburgring, and then Le Mans for the first time, so I was beginning to have some good races. Then, I went on to do eight races in F1 for Scuderia Serenissima. These were in the DeTomaso-Conrero Alfa, Cooper-Maserati, and the Lotus-Climax 18 which had been Jim Clark’s car the previous year, and then, I did one race for Ferrari. When I won the Targa Florio for the first time in 1965, Ferrari gave me the eight cylinder GP car for Monza.

ED: So where was your first F1 race?
NV: That was at Monza in 1961, the year that von Trips was killed. I saw the Trips/Clark accident which was a terrible thing. That was when I was driving the DeTomaso. I remember Ricardo Rodriguez was making his first race in a Formula 1 car, as well. I had seen him at a few races and thought he drove too hard, too fast, but his brother Pedro was quieter and more steady. I drove with Pedro at Reims and at Le Mans, and he was an exceptional driver, very fast and very good. He was a sympathetic and responsive boy.

I felt because he was Mexican he was much like a Sicilian, like me, and we got on well together. He was a very good co-driver. At Le Mans in 1965, we were very close in our times. I think I was a little quicker. We had the 4.4 liter 365P2 entered by NART. It was fast but not reliable, and that year we lost three hours and 40 minutes to change the gearbox, the clutch and the brakes. Without these stops, we would have won because we came 7th , only 28 laps behind the winners, and we were stopped for that amount of time.

ED: What were the important Ferrari races for you?

NV: The most important Ferrari race was the Targa Florio in 1965 because my victory was a victory for Sicily. All along the roads were my countrymen, Sicilians, shouting “Nino, Nino Nino” it was fantastic. My co-driver was my friend Lorenzo Bandini, and he was a fantastic driver. We had good rapport, and the Sicilians loved us and, of course, that was the year we beat all the Porsches. In England, in France, in Germany it is not possible to see this fabulous Sicilian atmosphere. But, as far as races are concerned, Le Mans is more important, and I preferred the faster circuits. Even though many people think of me only in relation to the Targa Florio, I myself prefer Spa and Le Mans. I knew the Targa Florio circuit very well and everyone shouted for me, but it didn’t have the speed of the other tracks.

ED: There seem to be different stories about your work.. that you were a lawyer, a professor, a teacher: what is the real story?

NV: I have a “Dottore Juris Prudensa” which means I studied law at the University, but I never practiced or taught law. I bought a private school which I used to run with my sister, and I was known as the “presidente volante” the flying director!

ED: What are some of your memories from the F1 races?

NV: Well, the people, of course. I raced against people who became good friends, especially Graham Hill and Jim Clark, and in England I met some people who I knew for a very long time, like Innes Ireland, Bruce McLaren and Jackie Stewart. I remember having some good races with these people. At the Pau Grand Prix in 1962, Siffert and I were left on the line, and I didn’t have first gear. This was the car Stirling Moss drove in 1961, and I had a hard time on this tight circuit in Pau, but I got up to 6th place behind Bandini who was already driving for Ferrari. Then, I had a good race at the International Trophy meeting at Silverstone, which was won by Graham Hill who beat Clark and Surtees, and I had a valve break the Lotus-Climax. This was a good car with a good history, but I sometimes wasn’t very lucky with it. I had hit a pole at the Brussels GP earlier in the year and it had to be rebuilt. One race where I was disappointed was the Monaco GP in1962 where I couldn’t qualify the Lotus, although this was the car that had won the year before and I thought I could do well on a street circuit. Porsche lent me a car for the German Grand Prix at the Nurburgring, but it was an older car, and although I enjoyed driving it, it wasn’t very fast, especially as Gurney’s Porsche was very quick and I knew they could make a good F1 car. At Monza, I had another of the ex-Moss Lotus 18s and was 14th on the grid, ahead of the Ferraris, or most of them. I had a very big battle with Bandini for a lot of the race and we were coming through the slower cars. It was one of the most enjoyable Grand Prix races I had because it was so fast there. Near the end, I think I was 6th or 7th, but my engine blew up just before the line and I finished 9th, but the car just stopped. It wasn’t a bad race because the Lotus was about 3 seconds slower than the BRMs. 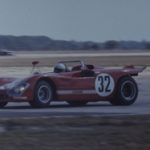 I won the F1 race at Vallelunga and had a battle with Baghetti, the “Lion of Reims” (after his debut GP win there in “61), and I kept him behind me which was a good feeling. I remember this was the time that I realised I was not afraid of any other driver. It was a time of some good Italian drivers. Baghetti was good, but I think Scarfiotti was better, and Bandini even better than both. We had some good races together.

ED: Which car do you remember as the one you liked the most?
NV: That is easy, it was the Ferrari 512M. I was driving for Ferrari in 1970, but in the 512S, and after I didn’t finish at Daytona with Giunti, he and I and Andretti won the 12 Hours at Sebring, even though in all of these races the Porsche 917 was faster. I was with Giunti again at Monza, chasing after the Porsches. I then set second fastest time at Le Mans after Giunti and I were third in the Targa. At Le Mans, the engine went and we retired. Ferrari didn’t make me an offer in 1971, and Alfa Romeo said I could drive for them so I did, but I would really have liked to race the 512M .

ED: The 1971 season turned out to be pretty good, didn’t it?
NV: Oh yes, I had some good results and then I won the Targa Florio again, this time for Alfa Romeo with Toine Hezemans, and that made the Italians very happy, and it was especially good for Sicily to have this victory, and it made me very popular in Sicily. You can yourself even here at this historic Targa how enthusiastic the Sicilians are: they even like you!

Ed McDonough
Ed McDonough, a UK-based American writer has fourteen motorsport history books to his credit. He is probably best known for track testing some of the world's best historic race cars. His books include "Marquis De Portago - The Legend", and a history of the Alfa Romeo Tipo 33. He participated in the World Sports Car Championship in 1973, drove in the UK Alfa Romeo series for eight years, as well as driving in many long distance races including Le Mans, the Nurburgring, Targa Florio and Giro di Sicilia.