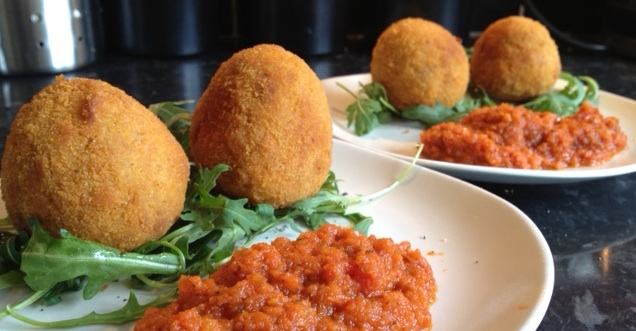 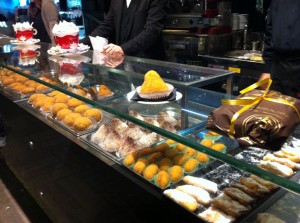 There is a debate going on here as to whether it’s called an arancina or an arancino.

Sicilians over the northern side of the island prefer the female form, finishing with the ‘a’ but there are still the die-hards who insist that their favourite rice ball is male so therefore ending in an ‘o’, one of which is Inspector Montalbano. Andrea Camilleri wrote a short story called Gli Arancini featuring our favourite Inspector. In Palermo they call it an arancina and pretend not to understand you if you pronounce it with a final ‘o’. Whatever….. They sell these delicious hot snacks in the rosticcerie here.

Beware though, as soon as you start crossing the Straits of Messina, even on the ferry, you are definitley out of authentic arancine/i territory and eating what looks like one of these is at your own risk!

The name originates from arancia (orange) referring to its shape and colour.

There are two classic fillings for arancine/i (plural form). One is a meat ragù which is like a bolognese sauce with peas added to it. And the other is ‘al burro’ which means with butter but the filling is more ham, mozzarella, besciamel and butter. There are many variations which include an aubergine filling, a mushroom one and, if you are visiting the sanctuary in Tindari (province of Messina) you just have to go to the bar there and taste their version with pistachio nuts, ham and a light besciamel sauce, which is absolutely divine. Of course, the recipe is secret.

We make them at home and have perfected our system by preparing a simple saffron risotto to which we add parmesan cheese at the end and then let it cool before moulding them into orange size balls.

Probably there are some Palermitani out there who are already screaming that that’s not the correct way to make them. They boil the rice and add eggs and cheese to bind it all together.

Whichever way you cook it, the most important thing, after it’s cooled down, is to use the palm of your hand to press the rice into, allowing your filling to sit in the middle (a good heaped largish teaspoon) and then gently bend your fingers inwards to start closing the ball. Add some more rice on top to gently seal it to keep the filling from oozing out. Sounds complicated but with a bit of practise it really is easy. The last step is to pass your rice balls in some beaten egg, coating the outside evenly, and then into a plate of crisp breadcrumbs. Deep fry them in plenty of oil until they are golden brown. Eat them warm but not too hot.