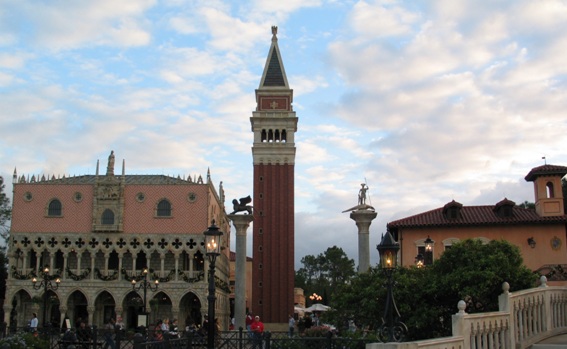 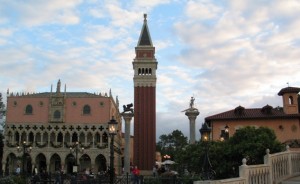 If everything were equal, even if everything were NOT equal for sure I’d rather be in Italy than most any other place on earth. The readers of this publication certainly feel the same way. And yet, we all know that there are circumstances and opportunities that might lead you to visit places that “pretend” to replicate what we treasure as Bella Italia.

One such place would be the Italy Pavilion in The World Showcase in EPCOT in Walt Disney World Resort.

For those of you who have not been to Walt Disney World it is possible that your idea of it is that it is just one Mickey – Moused base theme park.

One of its parks is called EPCOT. EPCOT stands for Experimental Prototype of a City of Tomorrow. Actually when Walt Disney started the Florida Project in the mid-60’s he did so because of his passion to truly develop a City of Tomorrow.

EPCOT is divided into two sections: Future World and The World Showcase. Future World consists of pavilions aligned to themes like creativity, energy, the seas, and technology.

The World Showcase is like a mini World’s Fair where you can find eleven pavilions dedicated to the cultures of their respective countries. Here you can literally stroll the promenade and enter into representations of these countries. It is not unusual for someone to say, “I am going to France,” or “I am going Germany.”

And in some senses you are. Each pavilion has exhibits, some have rides and movies, all have shops and restaurants that are themed to that country. In many cases the Cast Members (a term Walt Disney World uses for its employees) are visiting students from that country. Many of the countries have performing acts ranging from French mimes to Moroccan belly dancers.

The first thing you’d see as you walk towards the Italy pavilion is the 83 foot tall replica of the campanile that dominates the actual St. Mark’s Piazza in Venice. Designers in Walt Disney World, (called Imagineers) often use a technique called “forced perspective”. This approach means that a replica building is built at the actual size at eye level but gets smaller at the higher floors and elevations. The result is that a building, or a castle, or a landmark appears larger than it actually is.

On the left of the campanile is a replica of the Doge’s Palace. You will also see replicas of the two columns that flank the actual St. Mark’s Square. As in Venice, one is topped with St. Mark’s Lion and the other is topped with St. Theodore, Venice’s patron saint. Sharp eyes and seasoned travelers to real Italy will see that they are switched from how you would see them in Venice. You will also find a couple of gondolas tied up in the Lagoon that the Pavilion faces.

You can find three restaurants in the Italy Pavilion. One is Tutto Italia Ristorante, another is called Via Napoli Ristorante e Pizzeria, and the last is called Tutto Gusto.

Tutto Italia Ristorante is an upscale restaurant featuring a menu and wines with an authentic theme. Via Napoli Ristorante e Pizzeria has the best pizza in all of Disney World. Note that pizza in Florida is usually NOT very good! They actually truck the water to make pizza in from the Northeast United States to make the dough.

The newest addition is Tutto Gusto. It is decorated as a wine cellar but you can also order antipasti and even whole meals there.

No attraction in Walt Disney World is without a shopping venue and the Italian Pavilion is no exception. The Cast Members are usually Italian college students spending a year in the United States.

You can get dolci e ciccolatto in Delize Italiane, crystal and Murano glassware in Il Bel Cristallo, and an assortment of imported Italian wines, olive oils, and other delicacies in La Cucina Italiana. You can even find Venetian masks.

Besides the fountain, beautiful garden arrangements, and little nooks and crannies there is often live entertainment to be found at the pavilion. I particularly like when Befana tells stories of how Italian children celebrate Christmas during the Christmas season.

When you think of it, so much of what we do and what we enjoy is a replica or a model of something real. That includes the movies and television we watch and the games we play both as children and as adults. Yes the Italy pavilion cannot capture the depth and breadth of what an actual trip to or living in Italy would provide. However going there would fill you with a temporary nostalgia per le Italia Reale.