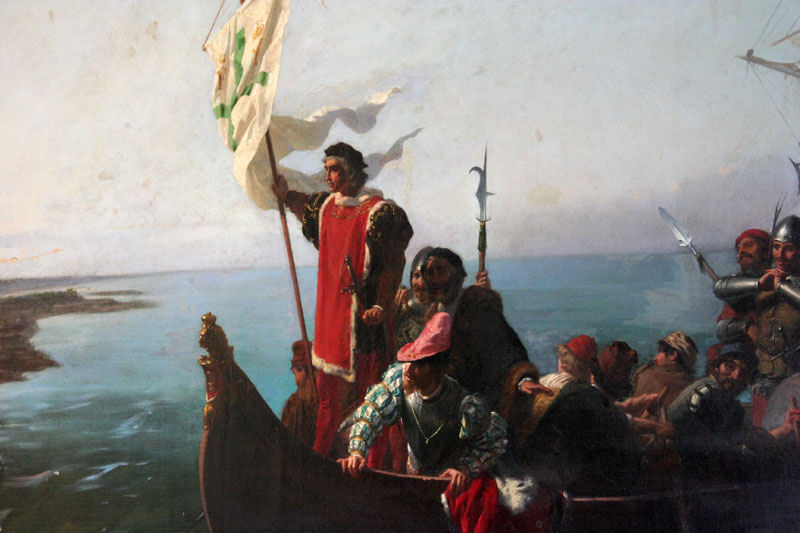 Special to the Tampa Tribune

The student’s last name captured my attention. “Colon,” I said. “Wonderful name!” The hesitant student stared at the floor.

As an Italian-American, I proudly celebrate Columbus Day. This Italian dared to sail a voracious ocean that feasted on mariners. At a time when thoughts of sailing off the edge of the earth made the bravest quiver, Columbus saddled the ocean’s waves like a maritime cowboy. He discovered a prize far greater than the Indies. Columbus found Central and South America, and Cuba among others.

Despite this, pseudo-intellectuals on America’s campuses attack Columbus. The explorer has been tar brushed as evil and racist. Facts don’t matter. The Admiral did not introduce slavery, nor did he initiate human sacrifice into the Americas. That sordid history flourished in the New World long before he set sail.

These assaults are aimed not merely at Columbus but at the United States and Western Civilization in general. This is the same hate America crowd who would love to change Thanksgiving to Harvest Day, despite the fact that President Lincoln chose to honor God when he made it a holiday.

Our nation brims with propagandists rewriting history. This revisionist gang continues to disparage our idealistic British forefathers who willingly risked everything to build a nation. This same ilk will discredit Socrates and Shakespeare because these European geniuses represent Western Civilization. Loudmouths on school boards have labeled the Admiral as, “despicable and exploitive.”

These agenda-driven cognoscenti scripting this historical fiction would not be benefitting from their lifestyle bereft of sweat-stained manual labor were it not for Columbus. The Admiral is the reason they thrive and are privileged to peddle the nonsense drooling from their lips.

I thank Columbus for my education, my nation, and students from ever corner of the globe who illuminate my college classroom. When I reflect on my heroic, pro-American Cuban refugee, a student who lost limbs to get to the United States, I thank the Admiral.

The USA would not exist in its magnificence were it not for Cristoforo Colombo.

To my former student Colon and, indeed, every Colombo, Colon, and Columbus, I suggest that you stand proud. It’s not goodbye Columbus; it’s bravo Columbus!

The article above was written and published in response to deliberate attacks and denigration of one of history’s greatest men, Christopher Columbus. Since Columbus Day is celebrated on October 8 th, this is the most appropriate time to respond to these cognoscenti. This piece first appeared in the Tampa Tribune on October12, 2009.

For several years, I’ve witnessed a calculated assault on the accomplishments and integrity of this brilliant explorer. These safe and secure critics, plopped behind desks blanketed with irrelevant rubbish, an ilk of critics who could not navigate a sailboat in a bathtub, who never felt the terror of a raging ocean, who could not plot a course across a pond, somehow became self-made authorities and launched verbal attacks against this great Admiral of the Alto Mare.