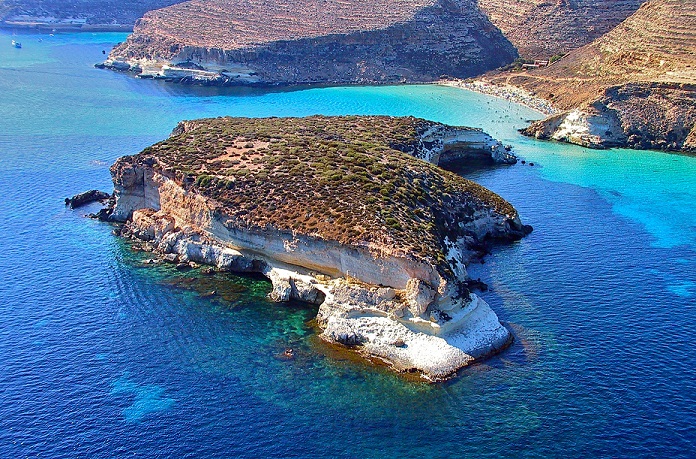 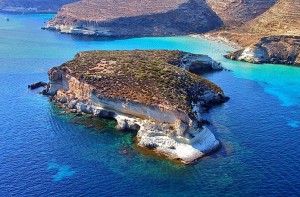 The secret is out, fortunately and unfortunately! What was for most Sicilians a “Secret Lagoon and Beach” in the shores of the island of Lampedusa, primarily visited by the locals only – has just received by TripAdvisor international recognition as “Best Beach in The Globe.” On one hand, we are extremely proud – on the other, we would have almost liked to keep the secret for us, if you know what I mean.

Let’s learn a little bit more about one of the most stunning archipelago complexes in the entire Mediterranean Basin: The Pelagian Islands. The name “pelagian” comes from the Greek “Pelagos” which means sea. The three islands that comprise the archipelago are Lampedusa, Linosa and Lampione. They were colonized by the Phoenicians, the Greeks, the Arabs and possess – still today – an incredible wealth of archeological remains in their seabed. The entire complex is the furtherst southern tip of the Italian peninsula, close to Libya on the south and Tunisia on the west.

Lampedusa is the largest of the three islands, known for its magical and romantic bays {called “cale” } and inlets {“insenature”}. If you love the sea as much as we do, you cannot miss the “Baia dei Conigli” {Bay of Rabbits} where the famed island is located – the origin of the name is not so clear. Some attribute it to a linguistic misunderstanding where the Arabic “Rabit” {=bond/relationship} was translated into English as “Rabbit.” Others associate it with the colony of rabbits that originally lived on the isthmus before it separated from the mainland. This is without any doubts one of the most beautiful and enchanted natural bays of Italy embraced by limestone rocks – purely white in color – that make the color of the waters and the sunlight radiate and reflect for a magical spectacle of juxtaposing light and water.

Noteworthy is also the presence of the Mediterranean turtles of the species “Caretta Caretta” {an endangered turtle} that are being studied and taken care of by the Centro Ricerca di Lampedusa in collaboration with WWF Italia. The center also sponsors a number of initiatives and events to diffuse awareness and educate the public on the adorable turtles but also on dolphins and baby whales present not too far from the coasts of the islands. The whales are usually seen in February and March off the coasts. By studying the behaviors and presence of these marine mammals, scholars have been able to identify and number the various types present in the area.

There are two other important gifts from the sea on these islands: one is “spugne” {or sponges} picked, disinfected and dried for sale to the public. Though industrial sponges are sold in most grocery stores and pharmacies throughout Italy – sale of these natural ones, is still high and remains a trademark of the islands. It is certainly a souvenir worth bringing back home. The other gift is the wealth of fish picked daily: from sardines, to anchovies, tuna, calamari and cod. A walk in the local port of Lampedusa – one of the few where the waters are so clear that the public is welcome to swim even here – early in the morning, will give you an insight into the preparation and lives of local fishermen before they set out to sea.

Francesca Mignosahttps://francescamignosa.wordpress.com
Francesca V. Mignosa is the Author of "My Sicily" (USA, September 2012). You can purchase the book or follow the Author's booktour, reflections, photos and thoughts on Sicily, the Sicilian-American culture, writing and much more on her: Blog: https://francescamignosa.wordpress.com Francesca organizes group and personalized travel to Sicily and Italy.