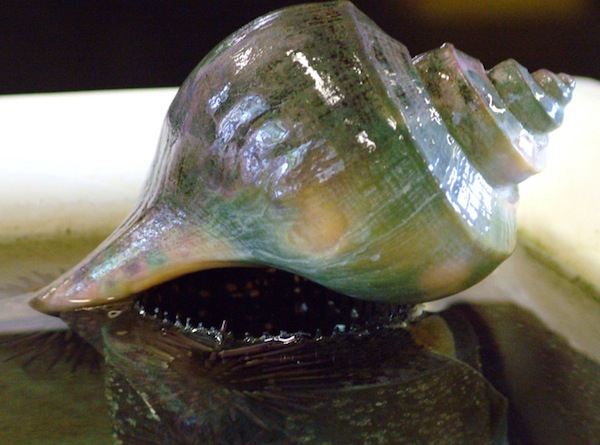 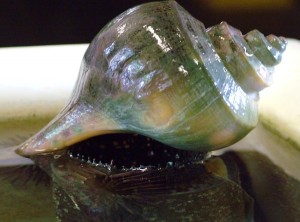 I sensed an echo chamber wrapped around me.  Sounds of splashing resounded. I felt somewhat submerged in a pool of water and  heard a familiar voice summoning, “Rispigghiati (Wake up) figghiu mio”.

Was the voice of my angelic mom warning me? Spitting out beach sand and salt water, I opened my grainy eyes slowly, while wiping them with the backs of my soaked hands.

I began noticing a goddess above me pulling me back to safety away from that angry Atlantic and its rogue waves. It was my loving wife Adelina. She smiled, “Saved your life just like your mom would have. You were sleeping in the sand and dreaming about her. You spoke with your mom in Sicilian.”  I smiled , stretched and started to get up. Then, I froze in my tracks. Next to my right foot, I saw a desperate and panicked fish skipping wildly.

“Merluzzo” the name jumped to mind as the somber eyed fish continued to wiggle helplessly from its unexpected bed of craggy sand, trapped between a patch of sand and the ocean. I reached down for this fish, called Cod in America, and, after fumbling and dropping the slimy fish several times,  successfully grabbed its slippery gill, and tossed it into deeper Atlantic waters.

And then, I stumbled on a “scungilli.”

A scungilli?  This delicious delight was a member of the conch family. Surprisingly, my thoughts were framed in my first language, a  one hundred year-old Sicilian dialect. I stood on a familiar beach that I strolled across for multiple summers as a child with my Mazarese  mother. Still, I wondered, what reset button in my brain transported me back to beardless days of my Sicilian beginnings, my figuttzu Antonuzzu days? Instantly my mind traveled back in time to all night card games with Sicilian fishermen, all of whom sported colorful nicknames. The ring of those names  like “Nassatzu , Languso,  and Grasiado” delivered  memories of family, songs, childhood, mandolins, Mom, Pop, laughter right to this summer beach of my senior years.

The first language spoken by this Brooklyn native occupied my mind on that stormy New York, new millennium shoreline. I reflected back on that  floppy Cod fish out of his element.  He’d stormed this coast.  Why?  I returned to my reveries of my childhood. Perhaps this “merluzzo” was summoned to remind me, to refresh my thoughts of all night Briscola games, uneven and crooked marble patios, cannolis, Italian ices, grape arbor summers replete with heated political debate, DiMaggio swings, vino and ridere(wine and laughter) with my familia of marinare.

That family of my youth, mostly gone forever, yet still thriving and surviving in my soul, in my children’s and grandchildren’s genes, and in the bedrock of “fare giusto” morality grounded in me. Now, so many of my ancient marinari sail unknown seas, challenging me to boldly navigate my own moral compass and to spread their wisdom on these unpredictable 21 st Century calendars.

How about you “merluzzo” and “scungili” lounging and fluttering helplessly on this cacophonous coastline?  Were you hurled here on this Atlantic coastline only to cart me back to roots, to help me recollect  that Sicilian couple who walked me, hand-in-hand during the last century, that couple, who beamed when handing me and my first, tiny American flag while simultaneously retelling the perplexing Sicilian tales of Giufa to their Figghiuttzu.

That couple always advising, teaching, and yes, disciplining me, even faking “la timpolata” (the smack) to mold the child-man of today. My uninvited “merluzzo”now reunited with the sea and the sunning “scungilli”  still sprawled out on sandy beach, I wonder, are you Pirandello’s illusion sent to prompt me to straddle both traditions? Are you a figment of my imagination?  Are you a merely a coincidence?

Or, has this once vibrant mind begun to unscramble under the weight of an avalanche of calendars?

I tend to cast my vote on Pirandello and this beach front illusion stimulating the Sicilian sangu, and collective unconscious passionately coursing these American veins.

Copying my dad’s practice, whenever he thought that he was alone by the seaside, I make the sign of the cross. Mine proved much more deliberate than Pop’s speedy, furtive version. Slowly, I strolled away from the ocean, lugging the baggage of nostalgic memories. I barked aloud, “Thank you, and Ussa benedica Signore Merluzzu.”