From Stones to Stars: The Story of Le Calette 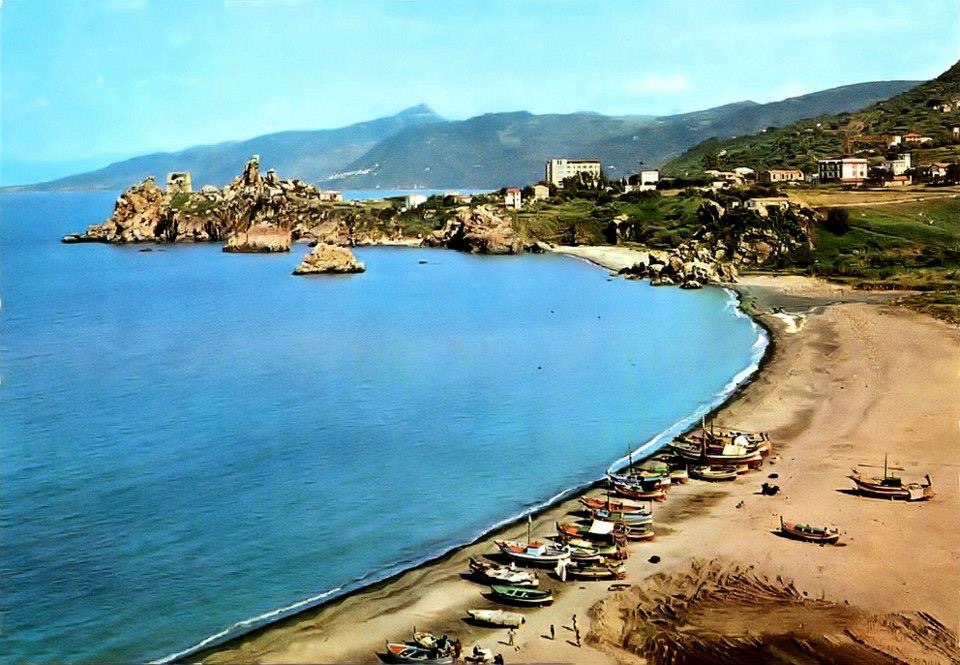 Cefalù is blessed with a divine location, possessing acres of golden sand and the imposing outcrop of rock which gave the settlement its classical name, Cephaloedium, taken from the Greek ‘kephale’ meaning ‘head’. The dramatic geology of the town provides a natural lee, a safe haven for the honey-coloured houses to slope gently towards the water. The rock also acts as a punctuation point, bisecting the town and creating a delightful shift in atmosphere to the east of the headland.

The bays on the eastern side are more intimate and embracing. As you turn off the main road and swing down towards the coast, passing the small ferry jetty to the Aeolian Islands, you arrive at a sequence of little inlets watched over by the Torre Caldura, the remnant of a tower once intended to guard the coastline.

In these auspicious environs, Santino Cacciola bought a strip of land in 1964. The views from the promontory were heavenly, but the stony ground was unsuitable for agriculture. Santino, an engineer, decided to design a hotel complex that would be sympathetic to the splendid location of the coastline. Today the hotel is proud of its European Union Ecolabel logo for protection of the area’s environmental heritage.

The low-rise buildings follow the contours of the land, blending stylishly and unobtrusively with the landscape. Le Calette was born. Over the years, the hotel has developed into the ideal location for those who want to combine luxury with the culture, art and relaxation that Cefalù has to offer. From the suites to the pool with its bay side views and the relaxing terrace to the private cove, Le Calette’s version of harmonious refinement attracts visitors from all over the world.

The establishment remains in the Cacciola family. Francesca, the daughter of Santino, and her husband, Angelo Miccichè, are overseeing the hotel’s rise to the heights of 5-star prestige. The couple’s strength lies in their dedication, attention to detail and entrepreneurial vision. All areas of Le Calette have benefitted from Angelo’s architect’s eye and Francesca’s business sense gained from her Economics degree, not to mention her flair for decorative design with a Mediterranean twist.

Le Calette is now celebrating fifty years as a prime destination on the Cefalù coast. To continue the family tradition, Gaia, the couple’s youngest daughter has joined the management team. She has a Master’s Degree in Economics and Management from King’s College, University of London and will also bring her experience in arts and culture from her time at Ca’ Foscari, in addition to 4 years at the United Nations. She has taken up the role of communication and marketing. Le Calette remains in good hands.

From its location under the benevolent gaze of the Torre Caldura, Le Calette is the ideal place to combine the benefits of a distinguished hotel with the nearby attractions of a UNESCO World Heritage site. Due to its Arab-Norman cathedral, Cefalù was recently bestowed this prestigious status. The town is also a marvellous base from which to explore the natural delights of the Madonie mountains which form a spectacular backdrop to this part of the Tyrrhenian coastline. Between the sparkling azure sea and the steepling foothills, Le Calette is a welcoming retreat from the rigours of everyday life.