LESSONS ON HOW TO RECLAIM A CITY: ADDIOPIZZO 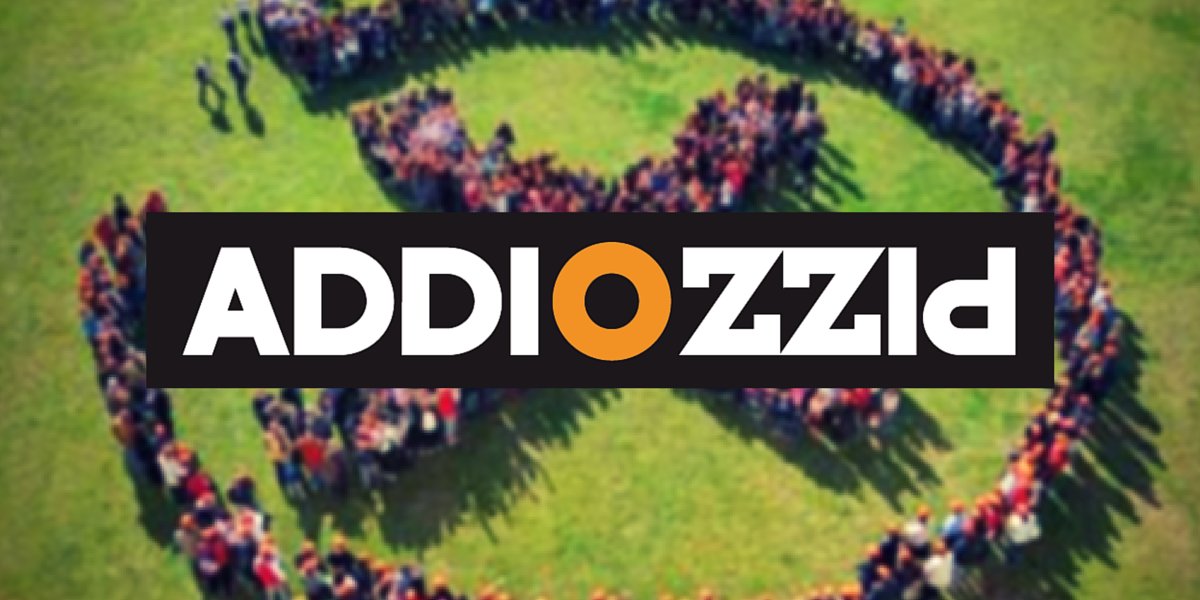 As I stood under the tree in front of Teatro Massimo, the opera house in Palermo, listening to Stefano explaining the origins of Addiopizzo (Goodbye  Protection Racket), I couldn’t help but be fascinated and in awe of this young musician who had voluntarily taken on such a brave and laudable cause.    Well-travelled, multi-lingual and with a first degree and Masters in teaching Italian to foreigners, Stefano decided he wanted to stay and work in his own city of Palermo and not be forced into itinerant travelling through Europe in search of work, as many of his peers have done in the past and are still doing today.

This was a Mafia walking tour of Palermo, but not one of those stereotype Godfather tours that we have been used to up until now.  This was an authentic, see with your own eyes, tale of how a small group of young people are revolutionising their city, reclaiming it from the criminal organisations which, for too long, have been strangling Palermo and other parts of the island.  A visit to Sicily and Palermo in particular, cannot be made without learning about this deep ingrained cultural heritage.

Addiopizzo  http://www.addiopizzo.org/index.php/who-we-are/  is a unique grassroots organisation, formed in Palermo in 2004 by a group of extraordinary youngsters.   Highly educated, they wanted to stay in Sicily after finishing their university degrees and originally thought of opening a pub.    However, when they started making a business plan they realised that they would have to take into consideration a regular ‘contribution’ to the protection racket business. 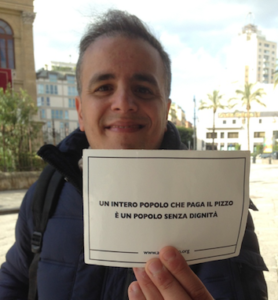 Angry and indignant at this deeply rooted  custom  they decided to make an anonymous protest by sticking fliers all over the city one night with the slogan: Un intero popolo che paga il pizzo è un popolo senza dignità   (people who pay the protection racket (pizzo) are people without dignity).  The reaction to their ‘silent’ protest was astonishing.  The Palermitani were jolted out of their apathetic, head under the sand attitude and an unrehearsed awareness campaign towards the problem of the protection racket in the city started.  The group eventually formed themselves into the voluntary association that they are today and went about their mission to convince shopkeepers not to pay the pizzo.   The pub was never opened!

So what is this pizzo?   Apart from it being a regular amount of money shopkeepers pay to have their businesses ‘protected’,  it is actually quite an important revenue for the organised crime syndicates  in Palermo and pays the salaries of the so-called ‘soldiers’,  or the legal fees of the bosses who are in prison.  It is even considered a sort of welfare fund for the families of the mob members who are presently behind bars.   Naturally this is not an income that the mob is willing to relinquish.

When in 1991 a prominent entrepreneur, Libero Grassi, was murdered by the mafia because he refused to pay the pizzo, shop owners were understandably  nervous about taking the risk of exposing  or resisting  their extortionists.   Addiopizzo decided to appeal to the general public.  They collected over 35,000 signatures from citizens who declared that they would support any commercial business if they made it public that they were not paying protection money.   The association took this to the shopkeepers and convinced them to join together as a united front assuring them that safety in numbers was a sure-fire way of keeping their extortionists at bay.   Which proved to be the case.

Libero Grassi had been left alone with no other businesses or official authority supporting his solitary rebellion.  Now his name is used in another of the association’s slogans:  ‘Un intero popolo che non paga il pizzo è un popolo libero’  (people who do not pay the pizzo are free people).   The shop owners were also promised free legal aid as soon as they denounced their extortionists and legal proceedings commenced.   The group of assenting businesses reached 100 before their names were published and, up to date, it has grown to over 1,000.   Addiopizzo realises there is still a lot of ground to be covered and sensitising local businesses takes time and patience but that is exactly their mission in life.  The mafia is well organised, they say, and so must we be.

Recently a group of Bangladeshi shopkeepers who are legal immigrants trying to build themselves a better life, also decided to band together and denounce the extortion racket.  They are now under Addiopizzo’s umbrella and conducting their businesses in a very central shopping area of Palermo.

There are also branch organisations in Catania and Messina who are slowly breaking down the cultural barriers.   Addiopizzo feels safe in the thought that any provocation or intimidation coming from the criminal organisations would indeed be counter- productive to the mob’s objectives.

The association is non-profit, apolitical and voluntary.   They have no official funding and rely on private donations and a small percentage of income from their offshoot,  Addiopizzo Travel.   Through a recent crowdfunding project they were able to pay for and install a children’s playground in Piazza Maggione where the two famous mafia judges, Giovanni Falcone and Paolo Borsellino, both grew up.   They were both victims of the mafia in 1992.  The first was blown up with dynamite on the freeway while driving from the airport, and the second was blown up from a car bomb as he was leaving his mother’s house in the city.

Other school projects of raising anti-mafia awareness, through extra curricula activities, have been funded by the Italian Ministry of Education.   Many school groups and organisations have taken part in the travel  activities the association organises.   Universities like Coventry, in the UK, come to delve deeper as part of their Criminal Studies course.  Edoardo Zaffuto, who operates the travel side of the association, has lectured on behalf of Addiopizzo at James Madison University, Virginia;  the Clinton School of Public Service, Little Rock;  Brooklyn College and Trinity College, Dublin.

The travel offshoot  http://www.addiopizzotravel.it/default.asp?hl=en&p=442  offers walking tours of the city, a visit to Corleone 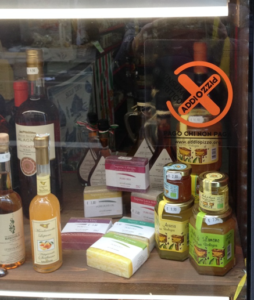 and other trips out of the city to Carini and Capaci where despicable mafia assassinations have taken place.  During these visits you will have an excellent bi-lingual English speaking guide who will talk frankly and truthfully about what is happening in the city and on the island today and what they hope, as an association, to achieve in the future.

This year Palermo has been chosen as cultural capital of Italy and is ready to prove just how much things are changing for the better here.  It will be hosting in 2018 Manifesta which is Europe’s most important biennial  contemporary art exhibition.    Mafia-owned lands and properties have been seized and  made available to any start-ups with socio-cultural objectives.  Many young people have formed co-operatives and have been given a chance to occupy the mafia confiscated lands and develop organic farming on the island.

Today, as you are walking through central shopping areas of Palermo, look out for the Addiopizzo stickers in the shop windows.  Rest assured that by spending in those shops you are not contributing to criminal organisation coffers. 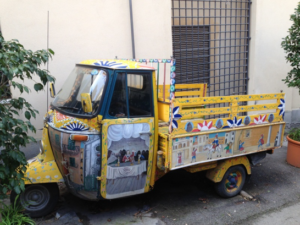 This group of amazing young people is intent on breaking down cultural beliefs which have been inculcated for centuries.   It is a long slow journey but they firmly believe in what they are doing, which includes targeting and engaging with young children in their anti-racket programme,  changing a deep rooted mentality.

As judge Giovanni Falcone said:  The Mafia is a human phenomenon and thus, like all human phenomena, it has a beginning and an evolution, and will also have an end.