The Literary Ghosts of Taormina 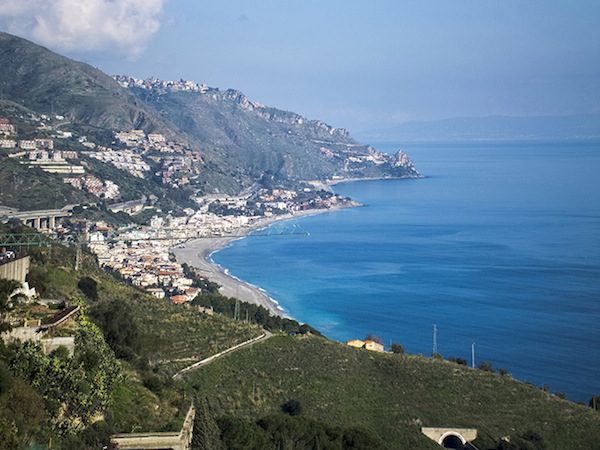 For those who have an interest in the ghosts of Sicily’s literary past, it is well-known that D H Lawrence was resident in the Ionian coastal resort of Taormina during the early 1920s.  The house he chose to rent from the returnee American immigrant, Ciccio Cacopardo, was christened Fontana Vecchia after the old spring in the garden.  To have the writer of Lady Chatterley’s Lover and The Rainbow as an idiosyncratic tenant would normally be enough for the bricks and mortar of most properties, but the Fontana Vecchia didn’t stop there: on the heels of Lawrence followed Truman Capote, accompanied by his lover and fellow writer, Jack Dunphy; not to mention the subsequent tenancy of Howard Agg, the English music journalist and playwright or the more recent residency of Norman Harrison, a thriller and adventure writer.

Taormina, once described by the Anglo-Italian aesthete, Harold Acton, as ‘a polite synonym for Sodom’ had been a playground for the dilettante rich and artistically inclined long before David Herbert’s arrival, chiefly thanks to the attractive paintings of the German, Otto Geleng.  These picture perfect recollections of Greco-Roman antiquity and Mediterranean beauty were a siren-song for those intent on finding the time and space to indulge literary or other, less publishable, habits.  By the time Lawrence rented the Fontana, Taormina had already seen the visits of Nobel laureates and renowned writers including Goethe, Guy de Maupassant, Oscar Wilde, Selma Lagerlöf, Hemingway and Friedrich Nietzsche, who penned much of Thus Spake Zarathustra whilst resident.  The list could go on…

The writers’ house, as it became known, can be tricky to find, a fact not helped by Taormina’s weave of vertiginous streets.  From the central Messina Gate, the pedestrianized boulevard of Corso Umberto sweeps passed the main sights.  Any prospective literary detective must delay the temptation to head up the Corso for a drink at Tennessee Williams’ favourite café, the Wunderbar.  Instead, the narrow Via Patrizio leads uphill to a honeycombed arch facing seawards.  The subsequent Street of the Capuchins, Via Cappuccini, then takes a nosedive into Via Fontana Vecchia.  The name will prove elusive, though, if you don’t persevere.

The street that bears the property’s name doesn’t actually contain the house and to confuse things further, neither does the adjoining Via David Lawrence.  Both of these thoroughfares are rather unlovely, lined by two and three storey post-war dwellings, punctuated by the occasional guesthouse, most notably the one named after the Englishman from Nottingham.  The street sign with his name is a prosaic monotone sheet full of rust.  A few feet from the sign, the road splits; one section flowing around the curve of the hill with glimpses of the limpid sea, the other going uphill flanked by houses on both sides.  Both lead to the property.  The high road crests the hill and is confronted by two dwellings, the second of which, a cream-coloured façade sporting a pink stripe, is our writers’ retreat.  The only sign of its famous inhabitants is a chiselled plaque embedded into the plaster denoting Lawrence’s presence between 1920 and 1923 – there is no mention of the others.

It’s not a palazzo or even a sumptuous villa – but a simple building resembling the intentions of its original owner, a comfortable home for a local contadino who had made himself a bit of money.  It presents a straight face to the world, its rendered walls butting against the tarmac of the passing street.  From the lower road you approach the tumbling garden and it’s only when seen from this angle that you appreciate fully what these wordsmiths saw in the location.  Starting with Lawrence, there are three good sources that reflect his own thoughts about the Fontana: his letters, the short story Sun (published as part of the compilation, The Woman Who Rode Away and Other Stories) and his poetry.

During his time in Taormina, David Herbert had ample time to pen his thoughts to friends, agents and publishers, although he had to wait weeks for replies that usually required snappy answers.  Apart from the missives to editors and concerns over royalties, his Taorminese work contains much insight into Sicilian mores and culture, although repeatedly filtered through Lawrence’s often jaundiced eye.  He lauds the elemental nature of the Sicilians who live around Mount Etna, but is more scathing when this approach impinges on the practicalities of life.

In the story, Sun, set in the grounds of the Fontana, the feverish warmth of a Sicilian summer stalks the text like a central character, an all-encompassing Don Giovanni: ‘Every day, in the morning towards noon, she lay at the foot of the powerful, silver-pawed cypress tree, while the sun strode jovial in heaven.  By now she knew the sun in every thread of her body.’  The protagonist’s sense of well-being in the story was a reflection of David Herbert’s own feelings.  In one letter, he uses the Italian ‘lascia mi stare’ (let me stay) to indicate his contentment with the surroundings; the almond blossom, cypresses, cacti, carobs and the Fontana’s spectacular balcony.

For such a wandering soul, this idyll couldn’t last forever.  In the opening chapter of his Sea in Sardinia, it is clear that he was casting around for a new location, with thoughts of Agrigento or even Tunisia.  Yet he remained sufficiently affectionate towards his temporary home to fuss over the closing of a door-window on the lower veranda – his solution, a chair propped against it.  Decades later, the last literary tenant, Norman Harrison, struggled with the same problem, as the obstinate warp had been bowed still further by the waxing and waning of the sun.  With regret, Lawrence trekked the road to the centre of town with wistful glances back towards the ‘dark garden’ and its Mediterranean abundance; he eventually made his way to Ceylon and New Mexico.

Truman Capote was equally taken with the mighty altitude of the views from the railings, but his letters written from the town in the early fifties and subsequent article entitled, Fontana Vecchia, are more liberally peppered with his characteristically sharp observations of the people he encountered and had heard about.  Nobody escaped Capote’s wit, from goat herders and delivery boys to the giants of literature and fashion such as André Gide and Christian Dior.

The future author of Breakfast at Tiffany’s led a life of early morning writing and early evening strolling, happy to fit in with the customary passaggiata so beloved of people in the Mediterranean.  These expeditions, to saunter among the crowds whilst buying supplies, were often accompanied by a martini or two and a chance to indulge in some more literary gossip.  Although Truman’s account of his time contains the occasional reference to the supernatural beliefs of the locals, it doesn’t indicate that he, personally, felt any kind of mystical presence in the house.  The same cannot be said for Howard Agg whose book, A Cypress in Sicily, relates the curious tale of a bearded apparition.

Drawn by his love of Lawrence’s works, Agg was eventually persuaded to rent the property as a sabbatical from his music journalism career in London.  The strange phenomena began with unusual air currents and the eerie sound of disembodied footsteps on the stairs.  The situation was then heightened by a darting light that bore no relation to the shadow play from street lamps.  The final straw came when he heard a voice and experienced a light that projected across the entirety of his bedroom wall without forming a silhouette.

Fearing ridicule, he finally established that his cook was experiencing similarly disturbing events.  It was the vision of an elderly sage, believed to be able to communicate with the other side, who convinced Agg to look in the direction of D H Lawrence for the origin of these manifestations.  The mystic told him that the presence belonged to a man with a beard – perhaps a tenuous link, but Agg was happy to back his supposition with evidence from Lawrence’s letters.  David Herbert had felt a deep sense of the past filtering through to the present when living at the Fontana and now Howard was experiencing the man from Nottingham’s own past, believing he was feeling the writer’s desire to be tangibly linked to one of the few places where he had been truly happy.

It seems this realization and a willingness to stay and embrace the mysterious episode was enough to quell the turbulent spirit of David Herbert.  The rest of Agg’s stay went by without significant incident, although the parallels with the Lawrences continued as Howard battled the owner to keep him from cutting down some of the garden’s magnificent tree specimens.  In addition to his memoir, Agg also left for posterity a collection of plays with Sicilian themes including, The Happy Day and Silk and Sawdust, a tale that draws on the island tradition of puppetry.

When Lawrence left the Fontana Vecchia, it was still possible to see the district as separate from Taormina.  Today, it sits well within the confines of the town, just another suburb consumed by the desire to eat up territory in pursuit of the tourist dollar.  However, Taormina’s geography has worked in its favour and any house on this ridge over the Ionian Sea still commands a majestic view.  Renovation and new ownership have given the Fontana an introspective privacy.  Like an actor coming to terms with a “difficult” past it has settled into a mature and secluded retirement.  But there is no denying its history; away from the milling hordes of a hectic high season, the old building still guards a semblance of the attraction which caught more than one writer’s imagination.

Much more about writers in Taormina and literary Sicily in general can be found in Andrew and Suzanne’s forthcoming book – Sicily: A Literary Guide for Travellers.  It will be published in March 2014 and is already on pre-order from Amazon.  Click the cover below.  If you want to follow their further adventures, take a look at their Facebook page: https://www.facebook.com/andrewsuzanneedwards