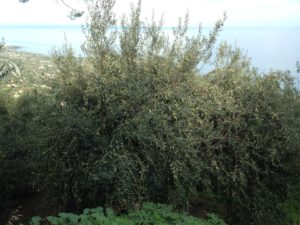 Since 4000 BC, at this time of year, conversation in Sicily is concentrated mostly on one thing only: olives.   This is the time when anyone who has olive trees will be dreading or looking forward to picking them.

We constantly hear people asking how many kilos of olives have been picked over how many trees.   How much oil did the olives yield.   Only 15% on the total weight!! You probably picked them too soon.   Should have waited until they had turned black and then they would have yielded more. Was it a good or bad year?   Did you measure the acidity?   And so it goes on, sometimes right beyond Christmas, depending on the area and the type of olive trees.

This year is a bumper year and even I decided that it would be a great pity just to watch them fall on to the ground instead of picking them.   So, armed with a mechanical device that combs through the branches making the olives drop onto the nets without spraying too many all over the countryside, I set about denuding my 12 olive trees. 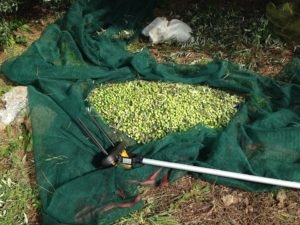 There was just one problem.   Whoever planted my trees hundreds of years ago, must have had some sort of perverse pleasure at imagining future generations trying to pick them.   Mine are placed on precipices and steep banks which means you have to swing monkey-like between the branches or balance precariously on the edge of steep drops trying, not only to pick the wretched things but, more importantly, actually getting them to land into strategically placed nets below.

The one thought that kept me going after rolling down the bank quite a few times, was that I would be able to say that my oil was going to be organic extra-virgin oil mixed in with a bit of blood and sweat to make it taste better.   I just hoped that I would be able to pick enough to make oil for myself and favourite daughter who lives in the UK and has to buy the surrogate version in the supermarket which costs a fortune and says blended oils from European Union, so who knows where it really comes from.

Three and half days later the last sack of olives was loaded into the car and taken to the olive press.   I managed to fill 13 crates with my olives, which were stacked next to other batches all looking a lot cleaner than mine which still had lots of olive twigs and countryside debris in them.   Fortunately the machine cleans everything out before pressing.

The moment of truth came as the crates were placed on the scales.   I had picked 260 kgs of olives!!!   After the initial elation, so started the speculation as to how much oil they would yield.   Everyone kept telling me that this year’s crop was yielding between 10-13% only, so not to get too excited. 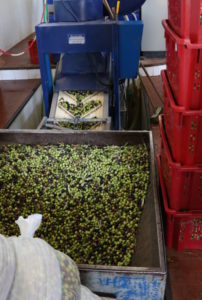 Then started the process of washing, cleaning and crushing the olives and ultimately ending up in a container which churned them for about an hour. All this while I was sitting in front of the machine to make sure that the end product was actually mine.    I had brought along a range of different sized containers and did not quite know which one I should start off with when the olive paste miraculously became oil.   “Start with the 30 litre one”, I was advised.   Never really thinking I was going to fill it, the oil got up to the rim and was still running!   My other 20 litre container was placed under the tap.   By that time I was breathless with excitement as the oil got to over half way and then reduced to a dribble.

I cannot quite describe the feeling of utter joy and contentment seeing that I had managed to transform all those olives into nearly 40 litres of the best olive oil in the world – in my opinion anyway!   I have since hauled 4 litres of it over to the UK, in my suitcase, for favourite daughter, and family and friends keep asking me how they can lay their hands on some – not mine! – genuine organic oil from Sicily.   Well, I am pleased to say that there are many local producers who sell abroad and through www.madeofsicily.com you can buy directly from them at a fraction of the price you would normally pay in the UK or elsewhere. 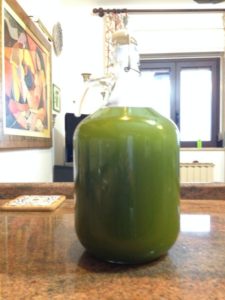 I am testing some of mine now on some fresh ciabatta bread and obviously extolling the virtues of my organic oil against the dubious type from the supermarket. Take this opportunity of bagging some from yourselves directly from the producers, before they sell it all off to other consumers. I can guarantee that it has a completely different taste to what you are used to and will add years on to your life!